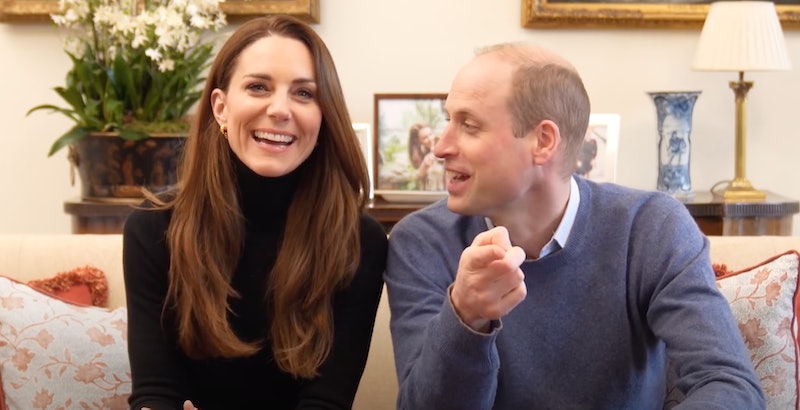 Meghan Markle and Prince Harry have some competition on the digital media front. Kate Middleton and Prince William have started their own YouTube channel called The Duke and Duchess of Cambridge, which they announced with their first video posted on Wednesday, May 5. Their newest project comes just days after the couple celebrated their 10th wedding anniversary with an adorable video in which their young kids — Prince George, Princess Charlotte, and Prince Louis — totally steal the show.

In their first video on the new channel, Prince William teased that they were shooting new behind-the-scenes content. “By the way, you’ve got to be careful with what you say now because these guys are filming everything,” he tells his wife, to which she responds excitedly with, “I know!” The video then shows some of the couple’s most memorable moments over the years, including their overseas trips, Kate shooting a bow and arrow, and them walking alongside royal family matriarch Queen Elizabeth.

The video’s descriptions leads to playlists called Mental Health, Early Years, and Engagements, hinting at the causes and occasions that the couple will possibly be covering on their new channel. The videos primarily come from the royal family’s existing YouTube channel (yes, this is a thing), where Kate and William have made multiple appearances. However, the Duke and Duchess of Cambridge channel will focus solely on themselves.

The launch of their YouTube channel comes just one day after their sister-in-law Meghan Markle announced her latest project, a children’s book titled The Bench, which will be released on June 8. The new book tells the story of a special bond between father and son, as seen through the mother’s eyes, and is obviously inspired Prince Harry and their child Archie.

While the Duke and Duchess of Sussex don’t have their own YouTube channel (yet), they’re far from lacking on the digital media front. In 2020, Harry and Meghan signed huge multi-year deals with Spotify and Netflix. The couple will create several projects for Netflix through their Archewell production company, with a focus on films, documentaries, and docuseries. For Spotify, they will produce and host a series of podcasts entitled Archewell Audio, which began in December with a holiday-themed special featuring Archie. Perhaps YouTube will be their next frontier.

More like this
8 Photos Of Prince George & Princess Charlotte At Queen Elizabeth II's Funeral
By Jake Viswanath
The Prince William & Rose Hanbury Rumours, Explained
By Frances Stewart and Sam Ramsden
Tyler Perry Makes Rare Comment About Meghan Markle & Prince Harry's Love Life
By Radhika Menon
William & Kate Shared How Their Kids Are Doing As They Mourn The Queen
By Stephanie Topacio Long
Get Even More From Bustle — Sign Up For The Newsletter