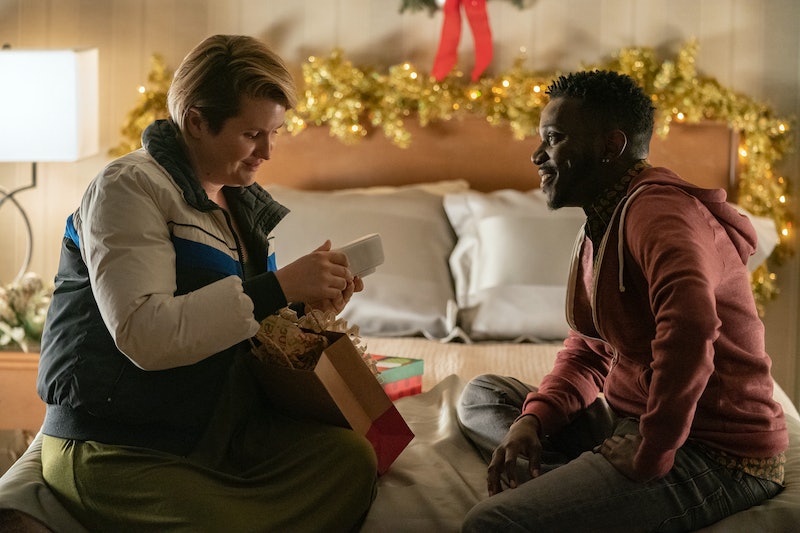 The fourth and final season of HBO's Room 104 anthology explores genres spanning from dark comedy to sci-fi and even includes the series' first-ever animated episode. Despite the setting — a chain motel room — always remaining the same, each installment features different characters, stories, and even time periods. The Room 104 Season 4 cast is equally eclectic, including everyone from Brittany Runs a Marathon's Jillian Bell and Stranger Things' Shannon Purser to Saturday Night Live vet Kevin Nealon and Mark Duplass, who co-created the series with his brother, Jay.

"It really helps when you know the season is your last, because if you get too weird or too crazy, they can't cancel you, because you're already gone," Duplass joked to Pop Culture about Room 104's final batch of episodes. "It's a little bit like senior year. Just kind of go do what you want."

That being said, Duplass hinted the show could live on in the future, adding: "I am hopeful, honestly, that we'll have a chance to ride again, somehow somewhere, whether it's in video form or maybe who knows, maybe there'll be radio plays or short stories or something, because I don't feel like we're definitely done."

Although some Season 4 storylines and characters — like one that will be played by Grey's Anatomy's Kevin McKidd, for example — remain a mystery for now, get to know some of the other people who will be featured in Season 4 below.

The series' co-creator stars in the premiere episode as an enigmatic, long-lost musician whom twenty-something Logan (Logan Miller) and four friends hire for an intimate performance that comes with a very specific list of instructions. Duplass, who recently played Chip Black in AppleTV+'s The Morning Show, also wrote, directed, and performed original music in the July 24 episode titled "The Murderer."

Bell, who starred in Brittany Runs a Marathon's title role, fronts the July 31 episode "Star Time" alongside Bernard Jones David and Jon Bass as a woman spurred to confront her history of addiction by an unlikely source.

A real-life former WWE star off screen, Bautista plays a retired pro wrestler who, with the help of therapeutic dolls, taps into his memory of an epic bout gone wrong – along with other traumatic, repressed experiences — in the Aug. 7 "Avalanche" episode.

In Aug. 14's "Bangs," the Brooklyn Nine-Nine star plays Eva, a woman who overhauls her potentially life-changing decision to get bangs at her divorce party. Actors Vivian Bang and Breeda Wool also co-star in the episode.

The Saturday Night Live vet and Happy Madison fixture plays a '90s dad tasked with helping his family (Jason David, Sadie Stanley, Skylar Gray, and Erinn Hayes) get out of Room 104, where they were unwittingly stuck living, in the Aug. 21 installment, "Oh, Harry!"

In the Aug. 28 episode "The Hikers," Purser (aka Barb from Stranger Things) plays Megan, who, along with her former college classmate Casey (Kendra Carelli), embarks on a three-month hike. During their journey, however, the women are forced to confront "irrevocable truths about their friendship."

More like this
‘The White Lotus’ Is Coming Back For Season 2 This Fall
By Bustle Editors
Everything To Know About 'Westworld' Season 5
By Sophia Moore
An Ultimate Guide To The Music Of 'Rap Sh!t'
By Brad Witter
On 'Industry,' Marisa Abela Takes Control
By Morgan Leigh Davies
Get Even More From Bustle — Sign Up For The Newsletter