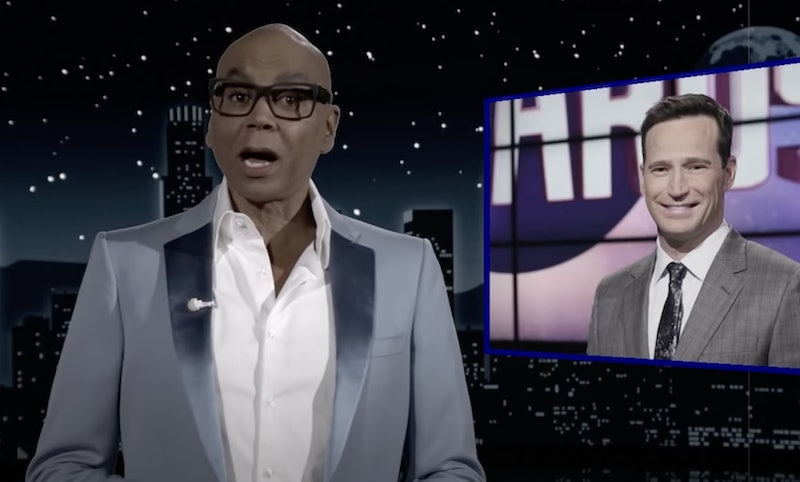 While serving as guest host on Jimmy Kimmel Live on Aug. 25, Drag Race host RuPaul threw his hat into the ring and suggested himself as the next host of the Jeopardy! franchise now that the newly appointed host, Mike Richards, resigned amid a deluge of controversy. During playful segment he called “Gayer News,” the Emmy-winning Drag Race creator reported the day’s headlines as anyone in the news might, then instantly turned them around and made them “gay,” or at least less bland and repetitive, which he lumps together and describes as “hetero.”

RuPaul explained that after Richards vacated the top job, the show is now looking for someone with “poise, authority, and natural intelligence” to follow in Alex Trebek’s legendary footsteps. He then modeled in the direction of the camera as the backdrop turned pink, electronic dance music began playing, and he exclaimed with a flourish, “I’m right here, bitch!”

Richards stepped down from the top job on Aug. 20 amid allegations about past comments he made, claims of harassment in the workplace, and the uncovering of at least one lawsuit, all of which made him a liability to be the face of Jeopardy.

As the game show looks for Richards’ replacement, an unlikely, but highly qualified contender has approached the podium — RuPaul — and he seems like a great fit for the job, seeing as he’s won the Emmy five times in a row in the Outstanding Host for a Reality or Competition Program category from 2016 to 2020. RuPaul is nominated again this year for that honor.

The actor, singer, host and legendary drag queen’s suggestion was met with hoots, hollers, and loud applause from the Jimmy Kimmel Live audience members, who seemingly agreed he is ready for the role. While RuPaul’s name probably wasn’t considered by many initially for the Jeopardy! position, he should be included in the roundup of names that are in the running, as he has the experience and the personality to pull it off brilliantly.

RuPaul is already one of the most beloved and successful hosts on TV today, and he’s got the ratings and the trophies to prove it. The superstar turned Drag Race from a fledgling reality program on Logo, itself an oft-forgotten cable network, into one of the most-watched series on both VH1 and now Paramount+. Between Drag Race and its many spinoffs, which include RuPaul's Drag U, RuPaul's Drag Race All Stars, RuPaul's Drag Race: Untucked and RuPaul’s Secret Celebrity Drag Race, the brand has now aired hundreds of episodes across 34 seasons, and that’s to say nothing of the international editions, which have been picked up in the U.K., Canada, Spain, Holland, Australia and even Thailand.

RuPual’s Drag Race, which earned the most Emmy nominations out of any reality competition in 2021, has earned 48 nominations and 19 wins since its debut in 2009, with all of the wins happening from 2016 to now.

In addition to his groundbreaking work on Drag Race, RuPaul has decades of on-camera experience. He got his start as a host in the mid-’90s with his namesake The RuPaul Show, which ran for two seasons and 100 episodes on VH1, becoming a landmark program in the process. He has also served as a judge, panelist, or presenter on programs like Skin Wars, Gay for Play, The World’s Best, and even his own daytime talk show RuPaul. While not all of these efforts have been successful, it’s clear he has a knack for the job, and he could easily transfer his skills to Jeopardy!

What started as a joke has now become a serious conversation, and somewhere, the producers of Jeopardy!, including almost-host Richards (who remains working on the show in a behind-the scenes capacity), may already be considering RuPaul for the coveted role. He would breathe new life into the series, help it attract a new audience, and turn a brand that has become a bit dull throughout the years into one that’s more fun and fabulous than ever.