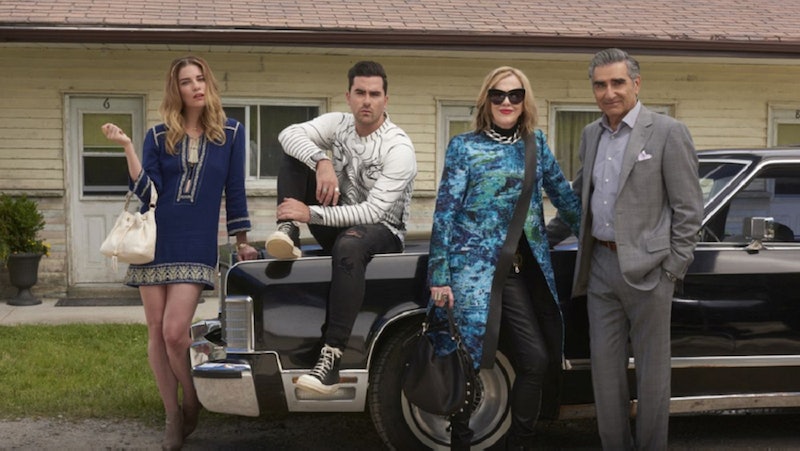 Schitt's Creek is more than just a riches-to-rags comedy about a family who moves into a dingy motel in a dismal town that they once purchased as a joke. Beyond designer clothes, celebrity name-drops and the frequent "Ew, David!" punchlines is a story that is truly trailblazing in its representation. Along with the show's portrayal of LGBTQ+ relationships and classism, the nine-time Emmy Award-winning series embraces Jewish characters and Jewish humor in a way that's rarely seen on TV.

After losing their wealth overnight and moving to the small, middle-of-nowhere town, it becomes clear that the Roses are the only Jewish family living there — mainly because of minor details like David's sister Alexis' hamsa necklace and the recurring mention of their bar and bat mitzvahs. Their Jewishness, however, isn't used to "other" them. Instead, their Jewish identity is a subtle, lighthearted, and sometimes perfectly awkward detail that pays homage to the creators' real-life heritage.

Like father-son duo and Schitt’s Creek co-creators Eugene and Dan Levy, the Roses are an interfaith family. In real life and on the show, Eugene is Jewish and his wife is protestant, making the writing true to the family's own inter-religious experience. And instead of portraying Jews as one-dimensional characters like Hollywood so often does, Eugene and Dan have managed to create an authentically funny show that addresses Jewish stereotypes about looks, athleticism, and even bagels.

Since the show's Jewish references often present in subtle, blink-and-you'll-miss-it ways, there's a solid chance that longtime fans of the Roses may have missed just how Jewish the show really is. And since it's Chanukah, there's truly no better time than now to look back at the most Jewish moments to ever air on Schitt's Creek.

After years of low-key nods at the Rose family's Jewish identity, David clears up any confusion about his family's mixed faith in the final episode of Season 4 – not just for us, but for his best friend and Rosebud Motel employee Stevie, too. Turns out, Stevie has no idea that David celebrates Christmas, and when she wishes his boyfriend and business partner Patrick a "Merry Christmas" at the start of the show's holiday special, David explains that he's a "delightful half-half situation," which is the most David way of putting it. Celebrating traditions from multiple holidays isn't uncommon; according to a 2013 Pew Research survey, 71% of Jews who married non-Jews put up a Christmas tree the year prior. And considering those stats came out seven years ago, we can only imagine how those numbers might have changed since.

When Johnny Was The Star Of His Hebrew School Baseball Team

We see bits of David's dad Johnny's Jewish pride throughout the show, but never as much as when he reminisces about his days as his baseball team's star left-fielder. When Schitt's Creek residents-turned-friends Ronnie and Roland are looking for an extra player for their own game, Johnny confidently steps up to the plate. "I used to play a little ball in my day," he says. "I was the star left-fielder from my school team." Like us, Ronnie has her doubts. And when she asks him if he played college ball, Johnny clarifies. "No, Hebrew school," he responds "There were seven of us, surprisingly, not a big turnout, but the Flying Latkes ended up in fourth place." He also claims his rabbi called him "Popeye" because of his strong arm — something we have a hard time believing because of his lack of athletic skill.

When Bob Can't Get Himself To Say The Word "Jewish"

In one of the most brilliant scenes of the show's six seasons, local businessman Bob comes to Johnny for help opening a bagel store, which Johnny initially takes as a compliment. However, it quickly becomes clear that Bob isn't asking because of Johnny's business sense; he's asking because Johnny is Jewish.

After Johnny explains to Bob that he would need to make "good bagels the real way," Bob assumes Johnny must know how to make them based solely on the stereotype that Jews love bagels. What's even funnier is that Bob can't even say the word "Jewish" out loud because he thinks it's an anti-Semitic slur. "I didn't know if I could say it, but boy, do you all love your bagels," he says nervously. "I mean, I do too and I'm not even —." When he's too scared to finish his sentence, Johnny reassures him that the word is not offensive. "I don't know why it feels like a swear," Bob continues. "What's the one you can't say?"

When David Really Wants Us To Know He's Not A Virgin

When David's sister Alexis convinces him and Patrick to go on a double date with her and Ted, David doesn't expect a ropes course will be involved. The idea of being suspended in mid-air doesn't sit well with him, either; he's visibly anxious and scared of heights. After finding out that David has never done one before, Ted jokingly calls him a "virgin." And in true David fashion, he's quick to clap back. "You might want to talk to half of my Birthright bus about that." After years of hearing about Alexis' travel shenanigans, it's fun to imagine 20-year-old David trotting around Israel on a 10-day trip with 40 other Jewish twenty-somethings.

When Alexis Gave Up Her Bat Mitzvah Tiara

In Season 5, we learn that Alexis wore a tiara to her bat mitzvah, which is not at all a requirement for the coming-of-age ritual but unsurprising given Alexis' affinity for the finer things in life. We also know that it's one of her more sentimental (and likely expensive) possessions because she somehow held onto it even as the rest of her family's belongings were repossessed.

Things get sticky when Alexis tells Ted that she kept a locket he gave her, despite giving it to Twyla, her friend and waitress at the local cafe. Desperate to get the necklace back, Alexis trades some of her more expensive jewelry, tiara included. When Twyla serves the Roses their food, she arrives at their table wearing several clashing pieces. When the family notices the all-too-familiar headpiece, Alexis is totally humiliated. Twyla, however, is more confident than ever as she struts around the restaurant in the diamond-encrusted crown Alexis wore when she was 12.

When David Finally Got The Bar Mitzvah Gift He Wanted

Viewers get a peek at David's bar mitzvah when Alexis tells Stevie how notoriously awful Johnny is at giving gifts. As a semi-absent parent who doesn't know his kids nearly as well as he should, Johnny thought building David — who couldn't be less interested in sports — a basketball court for his bar mitzvah would be a good idea. Perhaps it would have been if 13-year old David possessed a single ounce of athleticism, but alas, that's never been the case. Alexis went on to explain that David then punished the entire family by forcing them to watch him try and shoot a basket. After just 10 minutes, David broke his nose. Ultimately, he got what he really wanted: a nose job.

When Moira Made The Most Casual Passover Joke

Johnny's wife Moira may not be Jewish herself, but that doesn't mean she hasn't made some of the show's most memorable Jewish references. When Johnny runs over a cat in the fifth season, for example, Moira tells him that it's simply the circle of life and that he's "provided a Passover seder for a family of hawks" who will undoubtedly feast on the feline's corpse. As Moira continues scrolling through her phone as if nothing happened, Johnny is absolutely horrified. Leave it to Moira to find the most dramatic way to comfort her husband.

Nothing tells us more about the Rose's former lifestyle than when they name-drop their celebrity friends. And when Johnny encourages Alexis to audition for the town musical, he points out that they spent a lot of money flying in the vocal coach of Jewish trailblazer Barbra Streisand "that summer Alexis wanted to be Jessica Simpson." Unfortunately, Moira later reveals that the lessons didn't exactly work out. "Babs Streisand's vocal coach quit the business after just two lessons with our sweet Alexis," she says. And after hearing Alexis sing "A Little Bit Alexis," the title track off her "critically-reviewed, limited reality series," we can understand.

When David Re-Invents The Irish Exit

When David's old flame Jake invites him and Patrick over for what they think will be a sexy night with just the three of them, they accept the invitation to prove that they're adventurous. When they arrive, however, they discover that Jake's actually hosting a full-on sex party. Looking to leave, David and Patrick nervously pretend they left their wine in the car. But when Jake tells them he has plenty, David fumbles before coming up with the excuse that they need to get their wine because... it's kosher. As they rush out of Jake's apartment, they run into Stevie who was also invited — and who stays, might we add.

While high on dental surgery meds, Patrick calls David the "Jewish Channing Tatum." Of course, this is a major compliment to David, who is thrilled to be compared to People's former Sexiest Man Alive. This is one of many instances the show refers to David (and Johnny) "looking Jewish," a common but false stereotype born out of Western beauty standards. It's such a back-handed compliment —and so ridiculous to think that if David isn't Channing Tatum, he can be the next best thing: the Jewish version.

When Moira Hopes The Menorah Will Burn Down The Motel

During their first year in Schitt's Creek, the Roses were too depressed to celebrate the holidays. When Johnny gets into the holiday spirit the following year, though, the rest of the family isn't thrilled — especially because it reminds them of the decadent black-tie soirée they were once famous for hosting. Eventually, the Roses come around and surprise Johnny with a warm and intimate party with all of their Schitt's Creek friends. And yes, the celebration does include an a cappella rendition of "Silent Night" by none other than Moira and her singing group, The Jazzagals.

Viewers get a dose of reality when the festivities end and Johnny is the only one who remains optimistic. "The last thing we want is to have the motel burn down," he says as he moves the menorah to ensure the candles aren't too close to the Christmas garland. "Is it?" Moira asks. Turns out even a beautiful holiday can't take away from how badly she wants to leave Schitt's Creek.

More like this
Watch The Trailer For Netflix’s Edgy New Comedy 'FAKES'
By Brad Witter
Here’s The True Story Behind 'A League Of Their Own'
By Morgan Leigh Davies
Jane Lynch Revealed Why She’s Leaving 'Funny Girl' After Lea Michele Was Cast
By Grace Wehniainen
Does 'Locke & Key’s Ending Mean There Could Be A Season 4?
By Sophia Moore
Get Even More From Bustle — Sign Up For The Newsletter