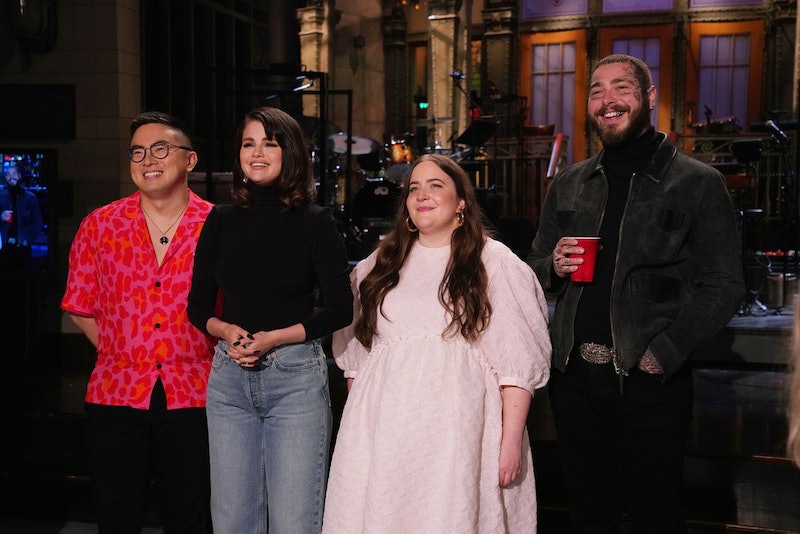 Rosalind O'Connor/NBC
By Grace Wehniainen
May 15, 2022

During Selena Gomez’s Saturday Night Live monologue on May 14, the “Lose You to Love Me” singer opened up about her relationship status — and she may not be dating, but she definitely is manifesting. “One reason I’m really excited to host SNL is because I’m single,” she said. “And I’ve heard that SNL is a great place to find romance. Emma Stone met her husband here. Scarlett Johansson and Colin Jost. Pete and... Machine Gun Kelly.”

Naturally, Gomez figured she could go down the same route. “Since I don’t really want to try the dating apps, I just want to put it out in the universe that I’m manifesting love,” she said. “And I would like to say that I’m looking for my soulmate, but at this point, I will take anyone.”

Cue, several potential SNL suitors lining up to shoot their shot — forcing Gomez to clarify that, actually, she didn’t mean anyone anyone. After turning down Kyle Mooney and James Austin Johnson, Gomez fielded a request from one more cast member, Punkie Johnson, who had a little more luck. “I’m so sorry these men out here harassing you. It’s just unacceptable, boo,” she said. “You’re just out here doing your job, you know? Damn! But um... I’ll do it.”

“Honestly, it’s kind of a vibe, but let’s see how the after-party goes,” Gomez responded.

This isn’t the first time Gomez has been candid about her relationship status. In March, she posted a TikTok video lip-syncing to a trending sound about shrugging off romantic advances. “Maybe this is why I’m single,” she wrote in the caption. “Don’t believe a damn word. 😭🤣.”

Last year, Gomez also opened up to Vogue Australia about making space for herself after a string of rocky romances in the past. “I think most of my experiences in relationships have been cursed,” she said at the time. “I’ve been way too young to be exposed to certain things when I was in relationships.” In the years since her breakup with Justin Bieber, Gomez has been linked to fellow celebrities like Niall Horan and Chris Evans — but ultimately, the rumored pairings seem to have been, well, rumors. Looking ahead, though? Keep a close eye on the SNL ensemble. If Gomez’s manifesting works, she might just find her next beau among the sketch comedy show’s cast.

More like this
Selena Gomez’s ‘SNL’ Hosting Debut Had Twitter Gushing Over ‘Barney’ & Wigs
By Stephanie Topacio Long
Pete Davidson & Kate McKinnon Are Part Of A Reported Major SNL Cast Shakeup
By Brad Witter
‘SNL’ Referenced Jesse Williams’ Broadway Leak In A Chaotic Theater Sketch
By Grace Wehniainen
What Is Mandy Moore’s Net Worth?
By Hugh McIntyre
Get Even More From Bustle — Sign Up For The Newsletter