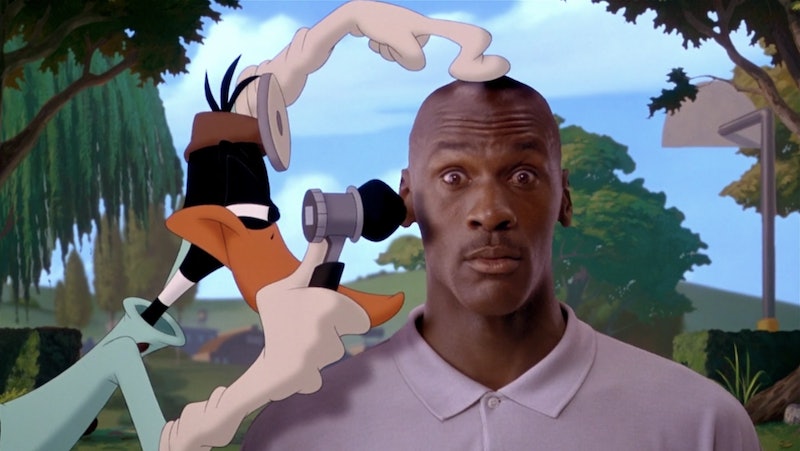 If you’re a millennial who grew up in the U.S., chances are you watched Space Jam as a child. It’s an iconic film that combines two staples in American culture: Looney Tunes and the NBA. While they might not appear to be natural allies, Space Jam proves they’re a perfect match.

The movie works because it doesn’t take itself seriously — it’s a comedy first and foremost. And for every joke targeted at children, there are also a few slipped in for adults to enjoy, hence this list of jokes from Space Jam that you probably didn’t get as a kid. Sure, there are NSFW jokes, but there are also cultural allusions that definitely don’t make sense to younger audiences, like that Tarantino reference.

With Space Jam: A New Legacy slated for release this month, now is a good time to refresh your memory with another viewing of the original film. It is, after all, Michael Jordan’s best (and only) starring film role. Whatever jokes that didn’t click as a child will absolutely come across now, even the ones that didn’t age well (like all the catcalling directed at Lola Bunny). Mostly, though, the quips are all in good fun — even the ones that are too blue for young children.

The minions “doing something weird” in a trench coat

The same year Everybody Loves Raymond premiered, Raymond star Patricia Heaton also delivered the line “This guy next to me is doing something weird in his raincoat” in Space Jam. She plays an woman sitting next to Swackhammer’s (Danny DeVito) minions at a basketball game, who are stacked on top of each other in a trench coat and fedora. The “doing something weird in his raincoat” bit — a joke about flashers — probably didn’t register when you were a kid.

You may have already known who Bill Murray was as a child, probably thanks to Ghostbusters. But the fact that he plays himself — or a slightly more eccentric version of himself — isn’t something many picked up on as children. Some real life references are thrown in, like when he reps the Saints — a team he partially owned at the time — with a baseball cap.

All the sly digs at the audience

There are lots of meta jokes in Space Jam, another one being the subtle jokes aimed at viewers. When a frantic Bugs Bunny tells Michael Jordan of Swackhammer’s plan to kidnap the Looney Tunes, he cries, “We’re going to be locked up like wild animals who have been trotted out to perform for a buncha lowbrow, bug-eyed, fat-headed, humor-challenged aliens.” Doubtful that Bugs Bunny means actual aliens, as they’re already ogled regularly by human audiences.

Common for children’s movies, there are plenty of discreet NSFW jokes to keep parents chuckling. As soon as the Toons show Jordan where they’ll be practicing — a muddy run-down gym — Sylvester the Cat says “We’ve got balls!” and unleashes a tidal wave of sports balls from a locker, from basketballs to footballs. Jordan’s response is tongue-in-cheek: “You sure do!”

The scene where Daffy Duck has the Warner Bros. logo tattooed on his behind is more than just a meta joke. When he kisses himself — and the logo — he’s really just kissing Warner Bros.’ butt. Looking back, it’s curious that the gag got past Warner Bros. executives in the first place. If you can’t laugh at yourself, how can you laugh at anyone else?

When Patrick Ewing is “unable to perform”

When Swackhammer’s minions steal the talents of professional NBA-ers, including Phoenix Suns’ Charles Barkley, the players undergo what appears to be psychotherapy. A Freud-like therapist asks New York Knicks player Patrick Ewing if there are “any other areas besides basketball where you find yourself unable to perform?” It’s difficult to imagine that any child would understand this sex reference, let alone Ewing’s hasty reaction to the question.

Did you know Charles Barkley was rumored to have slept with Madonna? Kids, almost certainly, didn’t. In a scene where Barkley prays in a church pew, pleading to get his talent back, he lists off all the “sins” he’ll “never” do again. Among that list was “I’ll never go out with Madonna again,” a jab at himself for their supposed encounter. The rumor gets even juicier when you consider that Barkley was (and still is) married at the time. Yikes.

Pretty much everything with Lola Bunny

A lot of the cat-calling jokes made at Lola Bunny wouldn’t fly today — which is likely why Lola’s character looks different in the sequel. In one of the more off-color jokes, Bugs coyly asks if she wants to “play some one-on-one, doll?” He probably didn’t mean basketball, which wasn’t something a kid would pick up on. Even after Lola smokes him on the court and says, “Don’t ever call me doll,” Bugs’ body stiffens like a board and makes a boiiiing sound in response. Very cringe, but also not surprising considering the era.

All the steroids jokes

Kids also probably missed the subtle steroid mentions. During the big match, Bugs Bunny tricks his own team into drinking “Michael’s Secret Stuff.” It’s just water, but it gives the players the alleged performance enhancement (and confidence) they need to beat the other team. The chicken Foghorn Leghorn makes a joke at what seems like himself by saying, “We’re also chicken. We need it bad.”

It’s highly unlikely you were watching Pulp Fiction as a kid, so this one was clearly for the adults in the room. During the match, Elmer Fudd and Yosemite Sam appear in black suits and sunglasses, obviously paying homage to John Travolta and Samuel L. Jackson's in Quentin Tarantino’s Pulp Fiction. Oh, don’t miss the part when they shoot out a minion’s teeth.