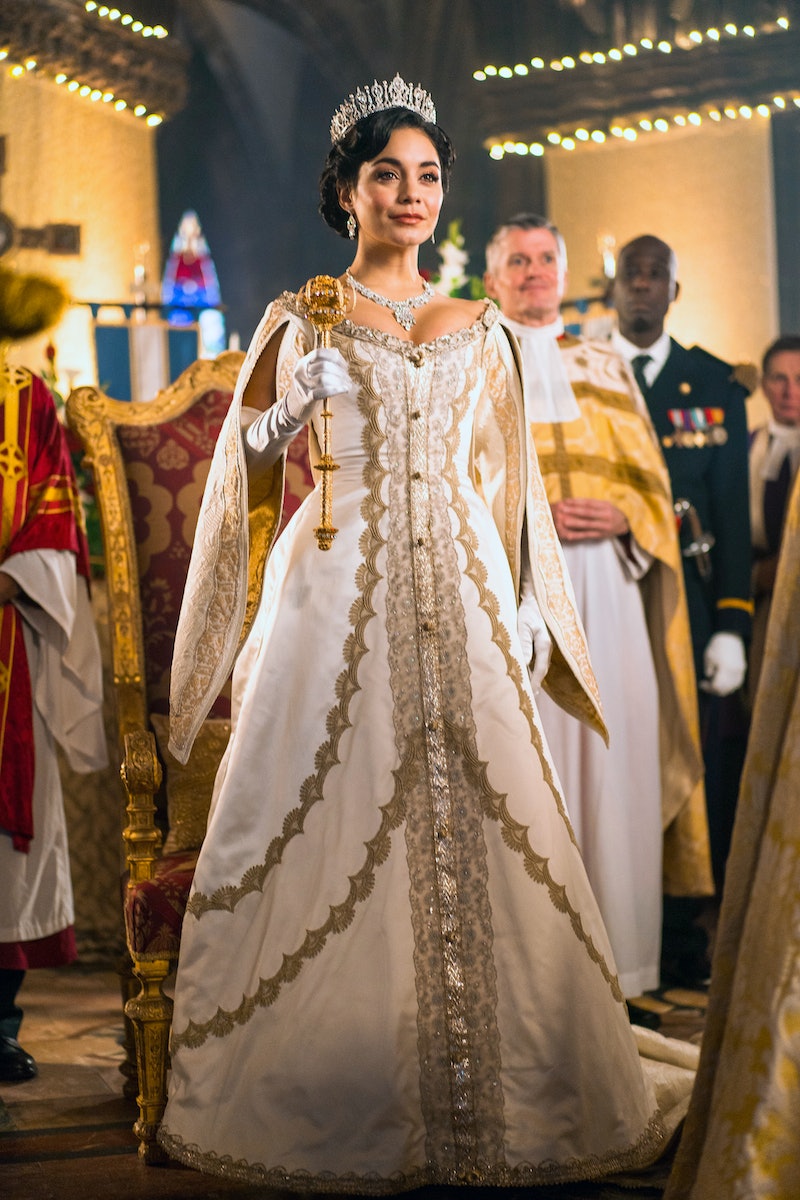 There are a few constants in this world: Mercury retrograde ruining everything, Emily In Paris dividing your friend group, and Vanessa Hudgens playing royalty that swaps places for kicks. Following the success of 2018's The Princess Switch and 2020's The Princess Switch: Switched Again, Netflix has confirmed the imminent release of The Princess Switch 3. Once again, Hudgens will play a trio of differently-wigged characters, including Chicago baker-turned-Princess Stacy De Novo, Queen Margaret Delacourt, and scheming cousin Fiona.

As for whether or not Hudgens will portray yet another identity in the third movie, she's made her thoughts on that perfectly clear. "There will be still three of me, which is more than enough in my opinion," she told PopSugar about the third movie last November. "We've been working on the script, continuing to elevate the franchise because it's always scary doing sequels. But it's going to be fun. There's going to be great 'fits. I'm really excited."

Ahead, everything we know about this insane threequel, including when you can stream it on Netflix.

What is The Princess Switch 3 plot?

Of course, a trilogy-making third film will follow the wild events of its predecessors. In the original Princess Switch, American Stacy (Hudgens) falls in love with European Prince Edward (Sam Palladio), who was destined to be hitched to then-Duchess Margaret (Hudgens, again). This romantic switcheroo happens as a result of identical-for-no-reason Margaret and Stacy trading places to get a taste of how the other half lives. (Note: Stacy is in the fictional land of Montenaro for an international baking competition.) Naturally, Margaret ends up meeting her match in Kevin (Nick Sagar), a single father and Stacy's best friend.

The sequel sees Stacy and Edward balancing royal duties with newlywed life. Meanwhile, Margaret preps for her coronation as Queen of Montenaro after splitting with Kevin due to long-distance and royalty-related issues. Enter Fiona (Hudgens, duh), Margaret's evil cousin who is hell-bent on stealing the throne. By the movie's end, both Stacy and Margaret are secure in their happily ever afters, while Fiona basically gets off with a warning for treasonous acts.

On Oct. 21, Netflix provided details about the third installment, and this time, the trio is teaming up with “a dashing, mysterious man” from Fiona’s past to find a stolen relic, the Star of Peace. Along the way, there’s the “rekindling the sparks of a tantalizing Christmas romance and resulting in a very unexpected switch.” Another one? Hudgens swore there wouldn’t be a fourth... but hey, why not?

Is there a Princess Switch 3 trailer?

Along with the plot details, Netflix released an official trailer for The Princess Switch 3 on Oct. 21. If you loved the first two films, this one will not disappoint. There’s even a fun, heist-y flair that brings something new to the royal digs.

When is The Princess Switch 3 release date?

When the third movie was announced last November, Entertainment Tonight reported that it would shoot in Scotland and be released in 2021 — and the film seems to be right on track. Hudgens commemorated the final day of production on The Princess Switch 3 with a black-and-white Instagram photo on Mar. 4. "And that’s a wrap on Princess Switch 3," she captioned the post. "What a whirlwind. Man everyone worked their asses off. AND stayed safe. BIG thanks to @netflix for taking the extra precautions to keep us on track and bring that new new to your screens. And now....I ZTFO ❤️🤙🏽🥂"

Now, we have an official Princess Switch 3 release date to look forward to. The third film will drop on Netflix Nov. 18.

Who will be in the cast of The Princess Switch 3?

In addition to Hudgens, Palladio's Prince Edward and Sagar's Kevin will both return. Spider-Man: Far From Home’s Remy Hii and Spinning Out’s Will Kemp will also star.

Another duo we may see again? Queen Amber (Rose McIver), King Richard (Ben Lamb), and their baby Princess Elleri of Netflix's A Christmas Prince franchise. The royal family briefly appeared at Margaret's coronation, hinting at a larger (possibly confusing) Netflix Christmas movie universe that could expand in the next movie.

More like this
Here’s Everything Coming To & Leaving Netflix In February
By Jake Viswanath
'The Crown' Season 6 Has Suspended Filming "Out Of Respect" For The Queen's Death
By Bustle Staff
Pamela Anderson Is Still A Hopeless Romantic
By Ilana Kaplan
Stephen Graham & Steve McQueen Are Working On A Wartime Drama
By Darshita Goyal
Get Even More From Bustle — Sign Up For The Newsletter
From hair trends to relationship advice, our daily newsletter has everything you need to sound like a person who’s on TikTok, even if you aren’t.