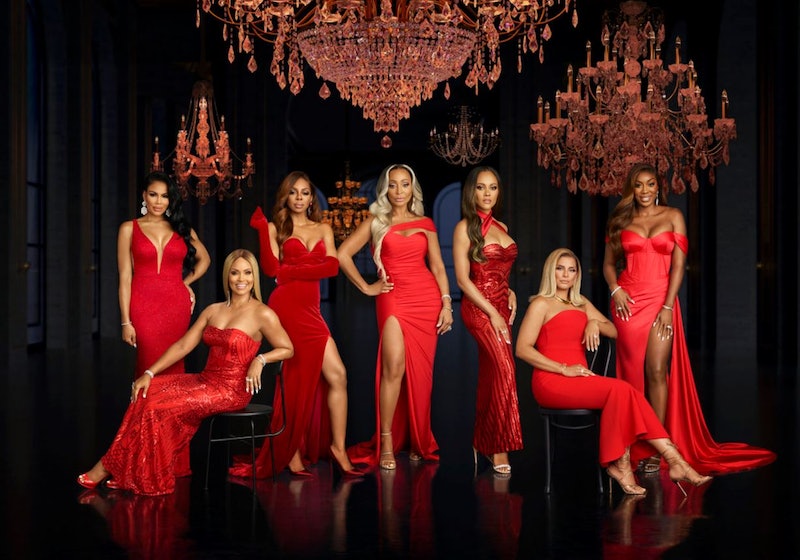 We’re heading back to Potomac on Oct. 9 when the newest season of Real Housewives of Potomac airs its seventh season. Over the six previous seasons, the women have shared laughs, tears, and fights, and the newest season promises even more intrigue as some cast members get divorced and new relationships spring up.

What Is Karen Huger’s Net Worth?

The wealthiest of the Potomac housewives, much of Karen Huger’s millions come from her entrepreneur husband Raymond Huger who is reportedly worth $40 million himself from creating his information technology company Paradigm. But Karen has also contributed to the Huger family's bottom line with the launch of her fragrance line, La’ Dame Fragrance.

In addition to starring on the Real Housewives of Potomac, Karen became the first of the Potomac cast to get a spinoff on Bravo. Karen’s Grande Dame Reunion was a two-part special in which she, Raymond, and their daughter Rayvin traveled to her childhood hometown and decided what to do with the family’s property in Surry County, Virginia.

What Is Mia Thornton’s Net Worth?

As the show’s “certified boss,” Mia Thornton lives up to her name with a staggering amount of businesses to her name and a reported net worth of $5 million. Thornton owns 10 franchise locations of The Joint Chiropractic in four states and is also the CEO of the cosmetics company she founded called Amilleon London.

Thornton’s husband Gordon also owns a few franchise locations of McDonald’s while owning an investment group. His exact net worth is unknown but also plays into Mia’s wealth. In a developing story, Mia shared an Instagram post on Oct. 6 detailing that Gordon’s brothers (who were entrusted to run The Joint Chiropractic offices they owned) had revoked their access to the company bank account.

What Is Ashley Darby’s Net Worth?

A former pageant queen, Ashley Darby rose to prominence as the winner of the 2011 Miss District of Columbia. While working as a bartender she met her now-husband, Australian real estate mogul Michael Darby, who is 29 years older than her. With his help, she launched Oz Restaurant and Bar, billed as DC’s premier authentic Australian restaurant.

Michael and Ashley are in the process of getting divorced, which may impact her net worth once everything is finalized.

What Is Candiace Dillard-Bassett’s Net Worth?

Candiace Dillard-Bassett started out in the beauty space, winning the title of Miss United States before transitioning into a political career. Dillard-Bassett worked for the 2012 Obama presidential reelection campaign and has also worked at the White House.

Nowadays, outside of starring on RHOP, she is the CEO of a pageant consulting company and the co-founder of the hair brand, Prima Hair Collection. Dillard-Bassett also co-owns Chateau Salon Suites, a space for beauty professionals. A woman of many talents, Dillard-Bassett is a singer currently on tour and recently also announced that a scripted series she wrote was moving forward at ALLBLK — thus contributing even more to her reported $4.5 million net worth.

What Is Gizelle Bryant’s Net Worth?

An original cast member of RHOP, Gizelle was previously married to a megachurch pastor, Jamal Bryant with whom she had three daughters. Only after the divorce did she move to the Maryland suburb, though she also spent some time working with the Birmingham, Alabama city council to help fundraise for charities.

Bryant was also the owner of the EveryHue Beauty makeup line which launched in 2016 and focuses on products for women of color. She announced the makeup line shut down in 2020.

These days, the show’s Queen of Shade has leaned into her show identity with the Reasonably Shady podcast, which she hosts with fellow RHOP castmate Robyn Dixon and a full line of branded merchandise.

What Is Robyn Dixon’s Net Worth?

Another of the original cast, Robyn Dixon is dating former NBA player Juan Dixon, whom she met in high school and was previously married to. The couple has two sons together and still live under the same roof in order to raise their children, and might be walking down the aisle once again.

Though her life as a WAG is technically over as Juan is retired, she and her family still have a substantial amount of cash to their name. Dixon also had a career working in PR and events, and even launched her own line of satin-lined caps called “Embellished.”

Now she also co-hosts the Reasonably Shady podcast with Gizelle Bryant, where she certainly makes a small amount from brand deals and sales from their merch.

What Is Dr. Wendy Osefo’s Net Worth?

Another self-made woman, Dr. Wendy Osefo’s net worth largely comes from her career as a political commentator on networks like CNN, ABC, and BBC. Osefo has a Ph. D. in Public Affairs/Community Development from Rutgers University and is also the founder of the 1954 Equity Project, LLC which aims to help minorities get higher education. While she’s not filming RHOP, Osefo is also a professor at John Hopkins University School of Education.

Osefo has a reported net worth of $1.5 million and is allegedly $1.5 million in debt — though much of that is said to be attributed to student loans.