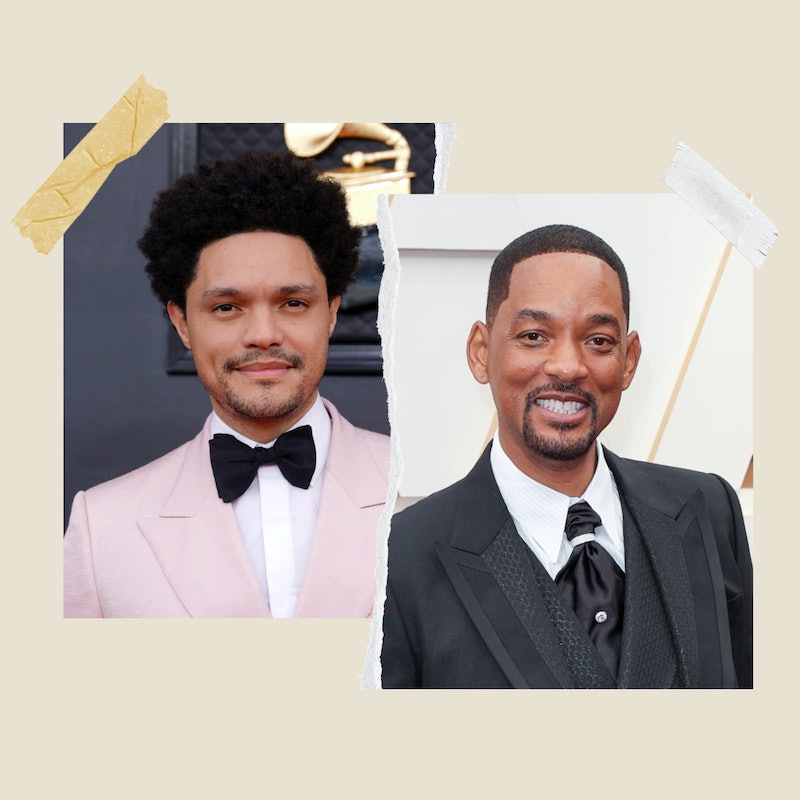 The 2022 Grammys have officially begun and it’s already shaping up to be an exciting night. Host Trevor Noah kicked off the star-studded event with an opening monologue that took a jab at Will Smith exactly one week after he made headlines for slapping Chris Rock at the Oscars. “Don’t even think of it as an awards show,” Noah said of music’s biggest night. “This is a concert where we’re giving out awards, all right? We’re going to be listening to some music, we’re going to be dancing, we’re going to be singing, we’re going to be keeping people’s names out of our mouths.”

The last bit was a nod to what happened during the Academy Awards. After Rock made an offensive joke about Jada Pinkett Smith’s shaved head — she lives with alopecia — Smith walked onto the stage and delivered The Slap Heard Around The World™. “Will Smith just smacked the sh*t out of me,” the comedian said as the King Richard star returned to his seat. In response, Smith warned, “Keep my wife’s name out your f*cking mouth!”

But the Grammy host’s speech touched on more than Smith’s Oscars scandal; it also shouted out all of the talented artists who showed up to celebrate the year’s greatest hits and most unforgettable albums. “Everyone is here. Every single person you could imagine is here,” the Daily Show star said. “Like Olivia Rodrigo. I saw Olivia Rodrigo myself. She was getting carded and she had to show a bouncer her actual driver’s license.” He also shouted out Nas, Lil Nas X, Billie Eilish, Finneas, BTS, Lady Gaga, and Justin Bieber, among others. “This room is full of music royalty,” he added.

Tonight marks Noah’s second time hosting the Grammys. He also hosted last year’s ceremony, which was significantly scaled-down due to the COVID-19 pandemic. “Trevor was amazing as our host for the 63rd GRAMMY Awards with praise from the music community, music fans and critics, Harvey Mason Jr., CEO of the Recording Academy, said in a statement when Noah was first announced to return. “We’re so excited to welcome Trevor back to the GRAMMYs stage and feel fortunate to once again have him hosting what we believe will be an unforgettable evening.”

Noah seemed just as stoked about the gig. In a recent interview published by The New York Post, the talk show host said that he couldn’t pass up the opportunity to host the event in person this year after hosting The Daily Show from his apartment during the pandemic. “I think the live element does bring in an energy but then you do sacrifice a little bit of that intimacy,” Noah said. “But it’s nice to have fans cheering for their favorite artist. It’s nice to see the performances because one of the biggest reasons the Grammys is my favorite award show is that it is a live music festival.”

The comedian also noted that Las Vegas — where the show is happening this year — is “the perfect place to have a celebration.” “I think it’s going to be a celebration of an industry coming back to life,” he explained. “I think a lot of the artists will enjoy Vegas. Nobody lives there. There’s an element of this (show) that’s like a music camp. I think it’s going to bring a different energy, and I’m excited to be a part of it.”