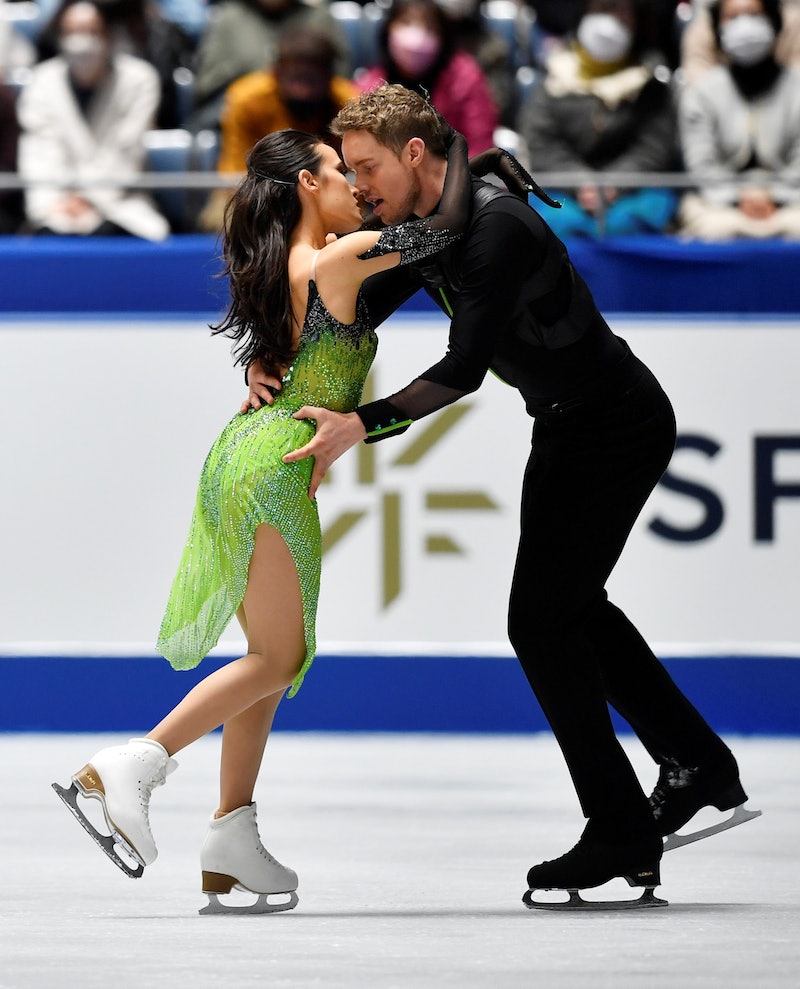 It may seem like summer’s athletes only just hung up their leotards and gold medals, but another Olympics is already upon us — a much colder one, of course. After the summer games were postponed a year due to COVID, the 2022 Winter Olympics are here to get the international competition back on schedule. Figure skating is one of the most popular (and most Googled) Winter Olympics sports, and how could it not be? From the dramatic costumes to the moves so majestic they defy everything you thought you knew about balance, the event is a guaranteed good time.

Going into the Beijing Olympics, Team USA writes that it “[expects] to battle Russia and Japan for podium spots.” (The former country is the sport’s most awarded in history, per The Atlantic.) It’s a daunting task, but on Jan. 10, the organization announced the lineup of skaters who might just help them do it. With events kicking off on Feb. 4, here are the individuals, pairs, and ice dance couples going for gold on the U.S. figure skating team at the 2022 Winter Olympics.

At 25, Mariah Bell is the oldest U.S. woman’s figure skating champion in nearly 100 years, per Team USA. (Much like gymnastics, the sport skews super young.) Though she only just secured her first U.S. title in January, she already has three Grand Prix medals and has been skating for a long time. In fact, she and fellow Team USA skater Nathan Chen (who you’ll meet soon on this list) grew up together and are best friends, according to Fan Zone.

Since competing at the 2018 Winter Olympics, 22-year-old Karen Chen’s been pretty busy — from promoting her memoir, Finding the Edge, to becoming a student at Cornell University. Though she’s on leave to compete at the 2022 Beijing Games, Chen told the school’s alumni magazine that she was “committed to [her] decision” to being a student. “It was hard that year, trying to train while being a normal college student, but I do feel like I grew and learned a lot about myself. ... I think it helped me prioritize my goals.”

The U.S. silver medalist has some help figuring it all out, of course — her mentor and fellow Fremont native, Kristi Yamaguchi, has been supporting Chen for 10 years and counting.

Alysa Liu became the first woman to pull off a triple axel and quadruple jump in the same program in 2019, the year she became the youngest-ever U.S. champion at just 13 years old. Even though Liu had to withdraw from the U.S. Championships this year due to COVID, she will still be participating in the 2022 Winter Olympics, taking on the biggest stage in her first senior season.

Jason Brown, 27, has been racking up medals since he was a kid and achieved a new level of mainstream fame in 2014, when his “River Dance” routine went viral shortly before competing at the Sochi Winter Olympics and bringing home bronze. Beijing will mark a triumphant return to the international games after he failed to make the Pyeongchang-bound squad in 2018.

When Nathan Chen hits the ice, look out for his impressive technical elements. At the 2018 Pyeongchang Games, he became the first figure skater to land six quadruple jumps in one program, and there’s no telling what the 22-year-old will accomplish this time around. He’s also won every World Championship since the last Olympics and is a current favorite for gold.

While Chen may be favored for gold, Vincent Zhou is another major contender to watch. At October’s Skate America, a surprise upset saw Zhou bring home his first gold medal while Chen scored bronze. “If anyone was to break my streak, I’m glad it’s him,” Chen said at the time, per U.S. Figure Skating. The 21-year-old skater has previously competed at Pyeongchang, where he came in sixth place and became the first figure skater to land a quad lutz at the games, according to Time.

The 2022 Winter Olympics is a feast of firsts for pairs skaters Ashley Cain-Gribble, 26, and Timothy LeDuc, 31. Not only will Beijing be both of the current U.S. champions’ first Olympic outing, but LeDuc is also the first openly nonbinary Team USA athlete to qualify for the games. “My hope is it shifts to that queer people can be both open and successful in sports,” LeDuc told Team USA. “Queer people have always been here, we’ve always been part of this sport, we’ve always been part of other sports. It’s not always been possible to be open ... I stand on the shoulders of so many amazing queer people.”

Before joining on the ice in 2016, neither Cain-Gribble nor LeDuc was even pursuing the competitive pairs scene, making their swift success in the arena that much more exciting to see.

Pairs skater Alexa Knierim, 30, previously competed at the 2018 Winter Olympics with her husband, Chris Knierim, and helped Team USA earn bronze in the team event. Though Chris retired from the sport in 2020, his wife wasn’t done skating — she joined forces with 29-year-old Brandon Frazier, and they won the national title in their first year together.

Frazier tested positive for COVID-19 just before the 2021 U.S. Championships, so the pair wasn’t able to defend their title, but they will be able to test their strengths at the Beijing Olympics.

Ice dancers Madison Chock, 29, and Evan Bates, 32, have been skating together since 2011, but it wasn’t until 2017 that they became an off-ice couple. Yep, they’re dating — and spending so much time together as skaters and significant others gave them an advantage over couples who were not accustomed to that 24/7 closeness during the pandemic. “It’s pretty funny that people are turning to ice dancers for relationship advice,” Bates told NBC Sports in 2020. “We’ve heard that ice dance is really like a marriage. I guess that must be true since we’ve got married couples asking for advice.”

The couple’s Pyeongchang outing — their second Olympics together and his third — was marred by a double-fall on the ice, but they’ve persisted. Chock had ankle surgery and they made a big coaching change, and now they’re heading back to the Olympics as the standing U.S. ice dance champions and potential medalists.

After first teaming up 10 years ago, the 2022 Beijing Olympics will be Kaitlin Hawayek and Jean-Luc Baker’s first time at the games. But even though the ice dancers haven’t competed at the Olympics before, Hawayek, 25, and Baker, 28, have already cultivated a reputation for fun, creative programs — and have picked up four bronze medals on the national level so far.

Madison Hubbell, 30, and Zachary Donohue, 31, were an IRL enemies-to-lovers situation, by the ice dance team’s own admission. As Donohue told Team USA in 2017, “We had competed against each other, we were very opposite people, and we literally loathed each other.”

But they soon discovered they were a match on and off the ice and dated for more than two years before realizing that being together that much was... a lot. “We had to ask ourselves what was more important: our on-ice partnership or our off-ice relationship? And we were both very clearly said the on-ice partnership is No. 1,” Hubbell explained. Since breaking up in 2018, the skaters have remained “great friends,” Donohue said. They’ve also managed to bring home three World Championship medals and were just short of winning bronze at Pyeongchang.

How To Watch The U.S. Figure Skating Team At The 2022 Winter Olympics

Now that you know who’s on the ice, you may be wondering when to watch the 2022 Winter Olympics. The games officially begin Feb. 4, which is also the day of the first figure skating event. You will be able to tune in via NBC and Peacock, where all events will be available live and on-demand, Per Today. If you have a cable login, you can also watch the games on NBCOlympics.com or NBC Sports.