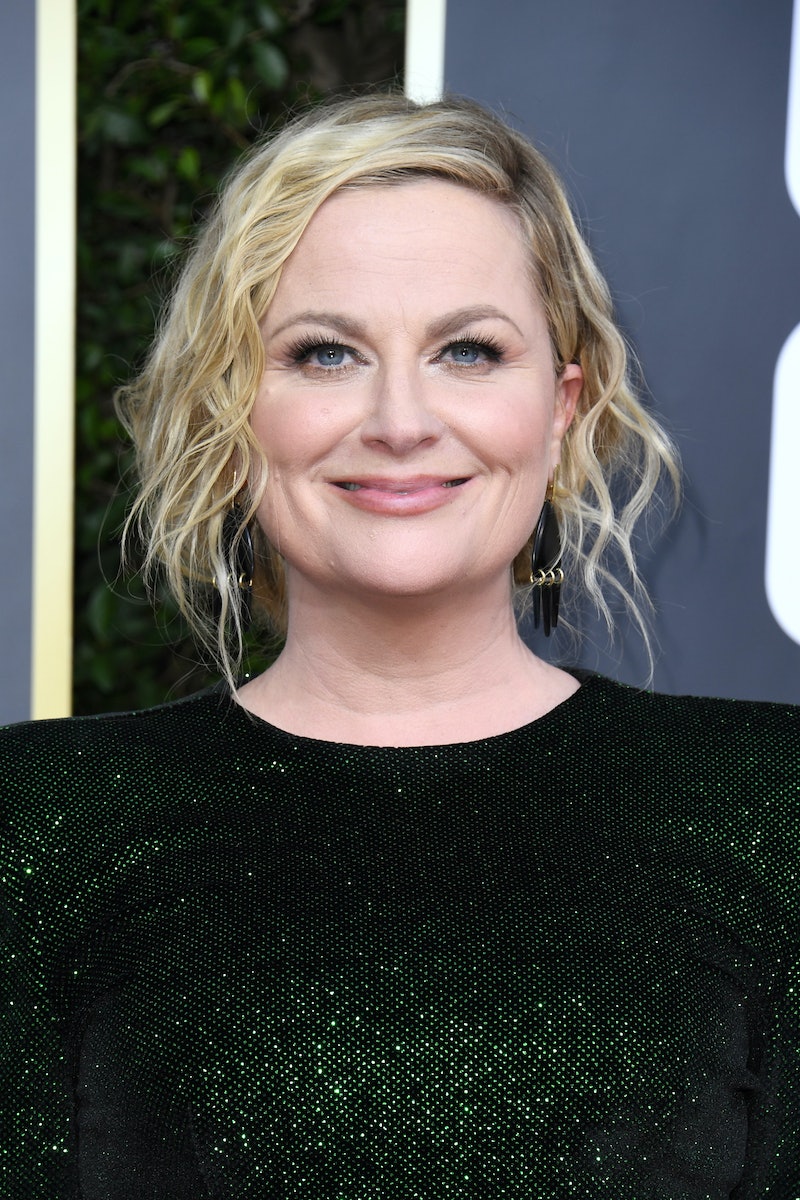 One of Hollywood's favorite duos is reuniting for the 2021 Golden Globes — a night of virtual acceptance speeches and comedic bits that will surely be about social-distancing. Adding some joy to the adapted awards ceremony are Golden Globes co-hosts Amy Poehler and Tina Fey, a reunion that's always cause for celebration. Since their days at Saturday Night Live, they've become life-long professional partners in film (Baby Mama, Sisters, and Mean Girls) and three previous stints as Globes hosts. With Fey nailed down as her forever work wife, it's got us wondering about Poehler's current romantic relationship status.

The Golden Globe winner, 49, was previously married to Arrested Development's Will Arnett, 50, from August 2003 to September 2012. Poehler and Arnett finalized their divorce in August 2016 and continue to co-parent their two children — Archie, 12, and Abel, 10. "When you are a person going through a divorce, you feel incredibly alone, yet you are constantly reminded by society of how frequently divorce happens and how common it has become," Poehler wrote in her 2014 memoir Yes Please. "You aren't allowed to feel special, but no one knows the specific ways you are in pain."

Since their split, Arnett and Poehler have maintained a strong unit for their children. The exes even seemed to be quarantining together in April 2020 after their joint appearance on the Canadian TV special, "Stronger Together, Tous Ensemble," to support frontline workers.

Poehler began dating comedian Nick Kroll, 42, in June 2013 amid outings to industry events, including AFI's 41st Lifetime Achievement Awards Gala, and cameos on each other's shows —Parks and Recreation and The Kroll Show. The couple mostly kept mum on their relationship, but Poehler did offer the following in Yes Please: "I have a boyfriend who knows how to settle me. He puts his hand on my chest and tells me boring stories. On one of our first nights together, I woke up apologizing for my snoring, and he pulled out two earplugs he had worn to bed so he could hear what I was saying. It was one of the most romantic gestures I have ever seen." Alas, Kroll and Poehler reportedly called it quits in 2015 after more than two years together.

Since then, her dating life has remained private, and her focus on several high-profile projects. In 2019, Poehler directed Wine Country, a vino-soaked ode to female friendship. Next up, her second directorial feature, Moxie, a movie about feminist revolution, hits Netflix in March. As for her personal outlook, Poehler told The New York Times she's embracing whatever her next phase looks like. "Not going to lie: 50 feels older than 40. But I like being the age I am," she explained. "I guess this is every moment of life. You start the story, and you go: I don’t like this. I don’t get this. Who are these characters? What is this story about?" she continued, adding, "And then in the middle, you’re like: This is so good. I don’t want it to end. Then it ends, and you think the next story is not going to be as good. That is what growing up is. It’s the reluctance to start a new story."

Wherever Poehler's narrative takes her, it's safe to say that the actual inventor of Galentine's Day has several chapters of life left to write.

More like this
Owen Warner Knows Exactly What Type Of Relationship He Wants
By El Hunt
Billie Eilish Has An Exciting Relationship Update About Her Boyfriend
By Grace Wehniainen
Who Is Pete Davidson Dating? He "Courted" Emily Ratajkowski At A Knicks Game
By Jake Viswanath
England's Ben White Proposed To His Girlfriend In The Sweetest Way
By Sam Ramsden
Get Even More From Bustle — Sign Up For The Newsletter