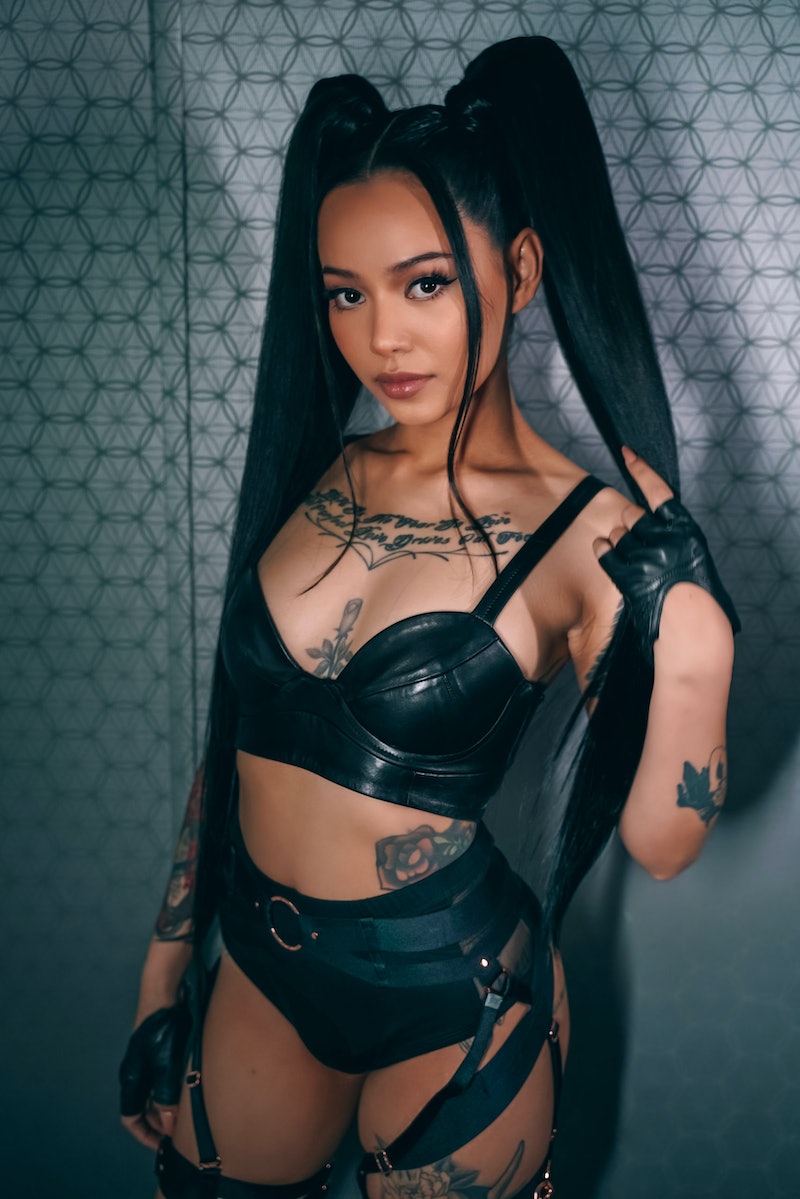 You’ve likely come across Bella Poarch’s cinematic music video for her bombastic debut single “Build A B*tch” if you’ve been on YouTube for more than five minutes in recent months. Less than three months since its release on May 14, the high-budget clip has racked up over 260 million views — a feat that’s generally unheard of in such a short amount of time. In comparison, Addison Rae’s “Obsessed” music video has only amassed 22 million views in nearly five months, and Dixie D’Amelio’s “Be Happy” clip has garnered 108 million views since its July 2020 release. Clearly, the singer has a lot of fans, but the extreme popularity of “Build A B*tch” has many people wondering, who is Bella Poarch?

Like many other internet trends that seem to appear out of thin air, Poarch got her start on TikTok. After launching her account in April 2020, she built a sizable following through her cute aesthetic, gaming content, singing videos, and dance challenges. But on Aug. 17, 2020, she posted a video lip-syncing to Millie B’s popular TikTok hit “Soph Aspin Send” with the camera zoomed in close to her face as she bops her head to the beat — a simple video that catapulted Poarch to extreme fame on the platform. It caught the attention of many users’ For You pages and has since become the most-liked video on the platform with over 600 million views and 51 million likes.

The video helped skyrocket Poarch’s popularity. Her TikTok profile now boasts over 1.7 billion likes and 78 million followers, which is especially significant considering she has 12.8 million on Instagram and 611,900 on Twitter. After the video went viral, viewers wanted to know more about Poarch, though aside from her public online presence, information about her backstory is hard to find — and confusing.

While it’s since been edited, Insider reported in May 2021 that the TikTok star-turned-singer’s official Facebook page was tied to a URL that ended in “TaylorNariee.” Additionally, an Instagram post from 2018 shows Poarch in a uniform with “Taylor” printed on it. This led fans to believe she performs under a stage name, though she hasn’t publicly addressed the speculation.

Her age is also unclear. As reported by PopBuzz, IG and FB posts from Poarch celebrating her 18th birthday would make the singer currently 20 years old, though the posts have since been deleted. In September 2020, Poarch tweeted what appears to be a screenshot from the website Famous Birthdays with her birth year printed as 2001, implying that she is 20. That said, the actual website lists her birthday as Feb. 8, 1997, which would mean she’s 24 years old.

Further complicating the debate over Poarch’s age, she has publicly spoken about her experience as a member of the United States Navy, and an IG post shows her serving in uniform as early as April 2017. Per the US Navy’s website, you have to be 17 years old to join, so if Poarch is currently 20, that would make her 16 years old at the time of her Instagram posts.

As with many other stars who quickly rise to extreme fame, rumors have spread on TikTok that Poarch sold her soul to the Illuminati in exchange for internet popularity. However, it’s far more likely that online algorithms are just working in her favor, as represented again by the release of “Build A B*tch” and its ultra-popular music video through Warner Records on May 14. Featuring Poarch in a factory of women being built part-by-part by an evil mastermind, the video follows her and the other women as they escape and destroy the factory to prove that women are far more than objects to be used and modified. With cameos from other popular online creators like Valkyrae, Mia Khalifa, and Bretman Rock, the clip boasts the same empowering message as the song’s lyrics: “This ain't Build a B*tch, I'm filled with flaws and attitude / So if you need perfect, I'm not built for you.”

Reacting to the video, one YouTube user wrote, “I swear that half a million views are definitely me. I'm addicted to this song.” Another viewer commented, “This is the only TikToker that made a debut in [the] music industry that isn't going to be a joke.” And a fan noted, “This song makes me feel like a strong independent woman, and I'm a guy.” Judging by the comments on her music video, Poarch is here to stay.

On Aug. 11, her stakes in the music industry were further planted as the “Build A B*tch” music video received a nomination for Best Visual Effects at the 2021 MTV Video Music Awards. Other artists nominated in the category include Doja Cat, The Weeknd, Coldplay, Lil Nas X, and P!nk, so the TikToker-turned-singer is in good company. Tune into the awards on Sept. 12 to find out if she wins, but either way, scoring a VMA nomination with just one song out is an incredible achievement.

More like this
Taylor Lautner Thought Taylor Swift's 2009 VMAs Interruption Was A "Skit"
By Alyssa Lapid
Jameela Jamil Defends Sam Smith After Trolls Body-Shamed Them
By Jake Viswanath
Twitter Is In Awe Of Taylor Swift’s “Lavender Haze” Music Video
By Jake Viswanath
Harry Styles Just Split His Pants In Jennifer Aniston’s Face
By Sam Ramsden
Get Even More From Bustle — Sign Up For The Newsletter
From hair trends to relationship advice, our daily newsletter has everything you need to sound like a person who’s on TikTok, even if you aren’t.

This article was originally published on May 27, 2021