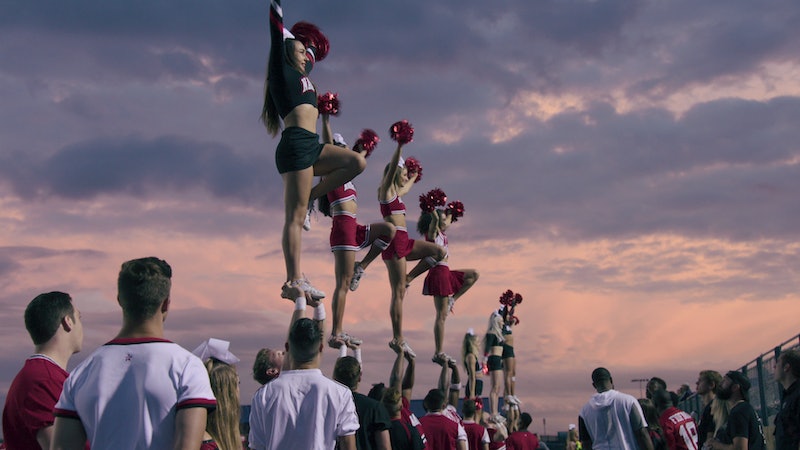 After two long years without the Bulldogs, Monica Aldama, or Daytona mat talk, Cheer Season 2 is finally on Netflix. Though the pandemic disrupted their usual routine, Season 2 sees Navarro College get back to business and prepare for the NCA National Championship. This time, their arch-rival, Trinity Valley, also gets a share of the spotlight.

Once you’ve watched the latest high-stakes drama, you may be wondering if there will be a Cheer Season 3? Netflix hasn’t confirmed whether or not the docuseries will return for a third installment, but there’s reason to be hopeful. The beautiful thing about Cheer, for starters, is that every athletic season provides more material for the show — the storylines write themselves. Plus, given the sheer popularity of Season 1 (it was a full-on cultural moment, Saturday Night Live parody and all), it seems that Cheer is a ratings boon for the streamer.

Because Season 2 follows the Bulldogs’ journey to the 2021 NCA National Championship, Season 3 could do the same for 2022’s big competition. In theory, that means filming would have to be happening now, as the event is in April. (Usually, you would expect to hear Netflix confirm another season before filming kicks off.) On many shows, you might see the cast (i.e., the cheerleaders) post about production as it’s happening, but that’s where Cheer is a little different.

According to Variety, Season 2 of Cheer filmed in secret. Production began in January 2020 but was cut short due to public health reasons (like virtually all of your favorite shows), and filming resumed that September. The secrecy was such that the existence of Season 2 was only confirmed when the trailer and release date dropped in December 2021. That’s pretty rare for the streamer, and it’s not clear why Cheer has taken such an under-wraps approach. Perhaps it’s a necessity of competitive cheer — that you never want your opponents and fans to know what you’re working on until competition and release day?

If this is the case with a potential Cheer Season 3, then you could safely guess that it would arrive in early 2023 following the typical nine months of post-production.

As for who might be included on the cast of Cheer Season 3, that’s as mysterious as the show’s filming schedule. You can pretty much guarantee the return of mainstays like Aldama, who helms the entire team. But given the nature of college cheer, there will always be students graduating and transferring to new schools after every season. Fortunately, the Bulldogs (and Cheer as a whole) always seem to have room for alums who want to stay involved. For example, Gabi Butler returned to the college for the 2020-2021 season after a year away. As they told Bustle in 2020, La’Darius Marshall and Morgan Simianer also extended their time at Navarro to keep on cheering. So even if your Cheer Season 2 fave is moving onto new endeavors, there’s a good chance they would still be included, somehow, in Season 3.

More like this
'Love Is Blind: After The Altar' Season 3 Has A Release Date & It's Very Soon
By Grace Wehniainen
'The Crown' Season 6 Has Suspended Filming "Out Of Respect" For The Queen's Death
By Bustle Staff
Andy Cohen Apologized To Larsa Pippen After A 'RHOM' Season 5 Reunion Dust-Up
By Brad Witter
Love Is Blind’s Natalie Claims Shayne Signed Up For 'Perfect Match' While They Were “Still Together”
By Brad Witter
Get Even More From Bustle — Sign Up For The Newsletter
From hair trends to relationship advice, our daily newsletter has everything you need to sound like a person who’s on TikTok, even if you aren’t.