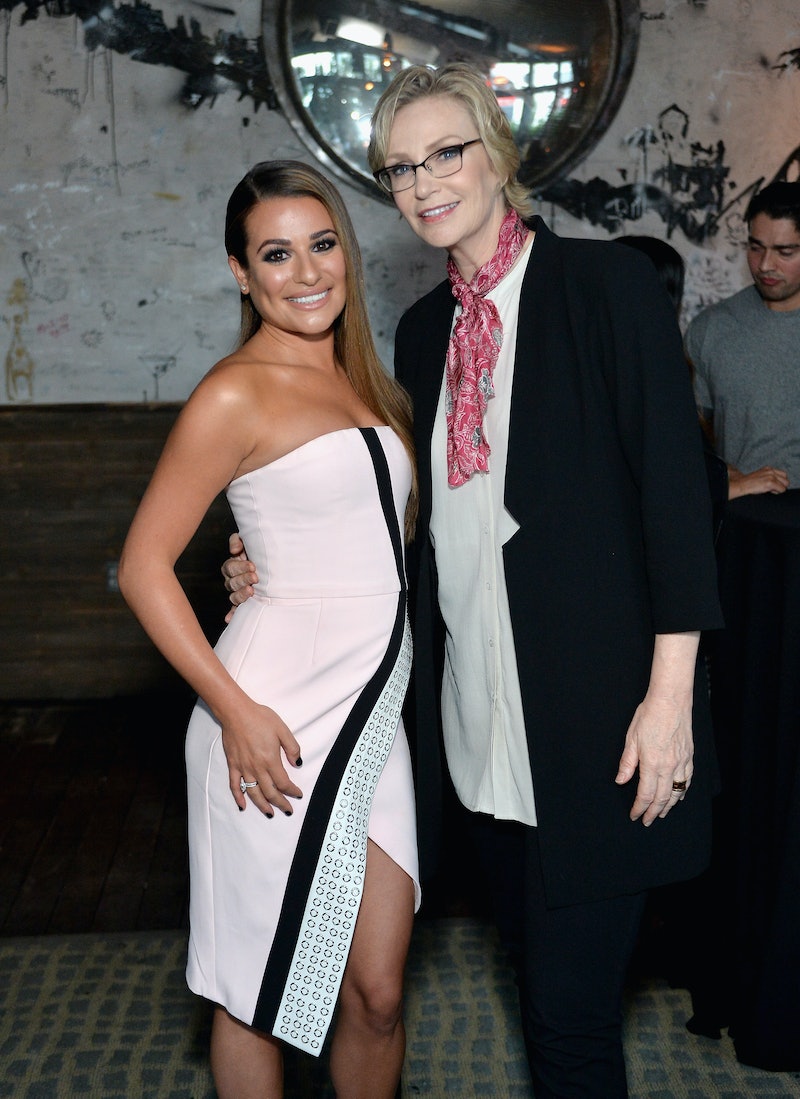 Gleeks know that when Rachel Berry was cast as Fanny Brice in the Funny Girl revival, Sue Sylvester was decidedly not a fan. “I just can’t even,” she says as she walks out of the theater during Rachel’s first song of the show.

But now, eight years later, life is imitating art with Lea Michele’s Funny Girl casting — and Jane Lynch wants people to know that the on-screen antagonists are all good IRL. But first, a brief recap: in case you missed this detail in the casting flurry and accompanying memes, Lynch (who played Mrs. Brice in the 2022 revival, alongside Beanie Feldstein as Fanny) was originally set to depart Funny Girl in early September anyway, before Michele’s debut. On Aug. 9, however, Lynch announced in a press release she’d be leaving even earlier — on Aug. 14.

Her reasons for departing? A pre-planned vacation and the upcoming Creative Arts Emmy Awards, at which Lynch is nominated for Outstanding Guest Actress In A Comedy Series for her work on Only Murders in the Building.

In a new Playbill interview, the actor preemptively addressed speculation that she was leaving to avoid Michele, who’s been busy rehearsing for the role. “It has nothing to do with not wanting to see Lea,” Lynch said. “I text with Lea. She and I are fine. I'm thrilled for her. I love working with Julie [Benko]. I loved working with Beanie. There's no drama here. None.”

Lynch also remarked upon the drama that surrounded Michele’s casting, and whether it impacted Lynch and co.’s final days of Funny Girl. “Well, that's the thing about being in a play — you leave all of that behind as soon as you step through the stage door ... It's a sacred space,” she said. “We just keep it positive. Nobody talks about that stuff. If anybody's reading it, they keep it to themselves. We're there for each other. And that's why I love it so much.”

The actor previously explained why she wouldn’t be performing alongside Michele — telling Deadline in July that there was “a really strong idea to have [Tovah] Feldshuh and Lea premiere together,” referencing the Tony-nominated actor who will be debuting as Mrs. Brice Sept. 6.

With exclusive celebrity interviews, the best new beauty trends, and earth shattering relationship advice, our award-winning daily newsletter has everything you need to sound like a person who’s on TikTok, even if you aren’t.

When Michele’s Funny Girl casting was first announced last month, Lynch was one of the few Glee stars to acknowledge the report — at first, simply retweeting the casting announcement, but going on to tell Deadline she was “so glad” for Michele. Several co-stars voiced their disappointment in the casting change, two years after claims about the Glee star’s on-set behavior caused controversy for the actor. “Yes, Broadway upholds whiteness. Yes, Hollywood does the same. Yes, silence is complicity,” tweeted Samantha Ware, who played Jane Hayward and accused Michele of “traumatic microaggressions” in 2020. Dot-Marie Jones, who played Coach Beiste, seemed to subtly share her opinion by liking several critical tweets about the Broadway announcement.

More like this
Lea Michele Recalls The Moment She Found Out She Was Cast In 'Funny Girl'
By Radhika Menon
'Grey's Anatomy's New Intern Got Advice From Dr. Bailey Herself
By Grace Wehniainen
The 'Reasonable Doubt' Cast Includes A 'Save The Last Dance' Reunion
By Grace Wehniainen
Here’s Everything Coming To & Leaving Netflix In October
By Jake Viswanath
Get Even More From Bustle — Sign Up For The Newsletter