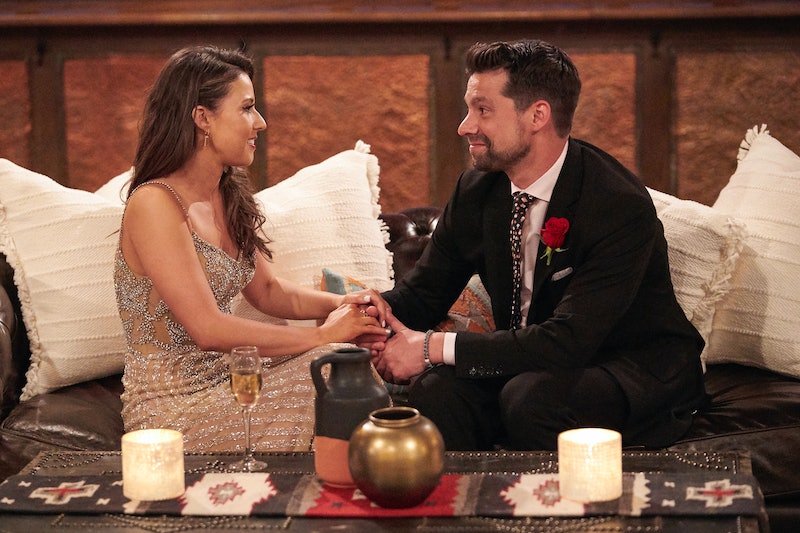 Katie Thurston has narrowed down her final four men on The Bachelorette — which also means we’re narrowing in on the next Bachelor. Fans have already pointed to Greg Grippo and recent departee Andrew Spencer as potential leads, but recently, a lot of attention has been on affable single dad Michael Allio. And ABC may have accidentally revealed his chances will get exponentially higher after the July 26 episode: Reddit users spotted Michael among Katie’s exes in a Men Tell All promo.

Ahead of the broadcast, the network teased that Michael will struggle with a “big decision” after an emotional FaceTime with his 4-year-old son, James. “I miss you like crazy, buddy,” Michael tells his son, who replies, “Maybe Daddy don’t want to see me” in the midseason trailer. Michael then has a conversation with Katie, explaining that the comment “tore [him] apart” and that he “can’t focus on anything else.” Cut to a shot of Katie weeping on a set of stairs, and it certainly seems like Michael will be going home.

The night the preview first aired, one fan tweeted that Michael is “the only option” for Bachelor, while another wrote that the Akron, Ohio native “will be the next bachelor after that FaceTime for sure.” A week earlier, Bachelorette alum Jason Tartick also threw his support behind the Midwestern dad, writing that his “vote is locked in” for either Michael or Andrew S. to front the franchise next.

Michael wouldn’t be the first single father to become the Bachelor, following in the footsteps of Jason Mesnick in 2009. It may seem counterintuitive for Michael to leave Katie’s season to be with his son only to leave to film his own season, but viewers may recall that production for The Bachelorette’s 2012 season moved to Charlotte, North Carolina to accommodate Emily Maynard — the first single mother Bachelorette. Even Michelle Young’s upcoming Bachelorette season will reportedly at least partially film in her home state of Minnesota, so Michael would likely be able to work it out so that he wouldn’t have to be away from his son for long.

Fans pulling for Michael won’t hurt his chances, either. “The silent producer on the show is the audience so we’ll see on Twitter who people say they want to see,” ABC Entertainment executive Rob Mills told Variety in January of the casting process. ABC typically announces the next Bachelor sometime in early to mid-September, so there’s still some time for the campaign to pick up steam.

However, Michael will have plenty of competition. In addition to Greg, Andrew S., and Katie’s two other finalists — Blake Moynes and Justin Glaze — there are several other contenders from Clare Crawley and Tayshia Adams’ shared 2020 Bachelorette season. Add the upcoming season of Bachelor in Paradise and Michelle’s Bachelorette season to the mix as well, and you can see why Mills said that “the pond is overstocked” with potential Bachelors this year.