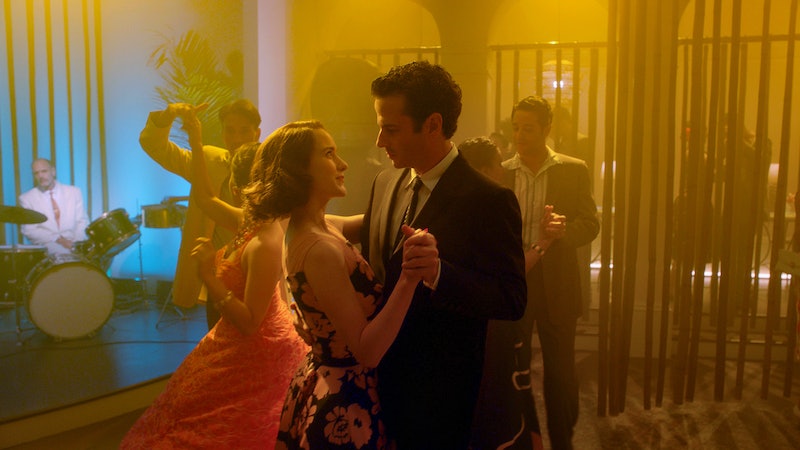 The Marvelous Mrs. Maisel Season 3 marked a turning point in Midge and Lenny’s relationship. Following an intimate night of dinner and dancing at a Cuban nightclub in Miami, the two stood outside of Midge’s motel room, seemingly on the precipice of finally taking their friendship to the next level. But Midge decided against it. “Before I’m dead,” Lenny smirked at her as they parted ways.

In The Marvelous Mrs. Maisel Season 4, their relationship will deepen, but not necessarily in a romantic way. Rachel Brosnahan, who plays Midge, tells Bustle that while Lenny has always been sort of an “elusive fairy godmother” to Midge, she begins to see him as “more of a real person” instead of the free-wheeling comedy legend she’s idealized him as. “She realizes that it’s maybe a little more complicated than just someone who says whatever he wants and doesn’t give a f*ck about the consequences,” Brosnahan explains.

Part of this has to do with the complicated legacy of the real Lenny Bruce, who died of a drug overdose in 1966. (Season 4 is set in 1960). “I think if we weren’t to tell that side of his story, it would be like putting too much vaseline on the lens of life,” Luke Kirby says of his character. But Season 4 will also see a shift in Midge and Lenny’s dynamic.

When viewers last saw Midge, she was standing on a tarmac in tears after being fired as Shy Baldwin’s opening act just before the international leg of his tour. This left her career and finances in a dire state, forcing her to essentially start back at square one.

As Kirby points out, Lenny always tends to appear “out of the ether” in times like these — when Midge is at her most desperate. But in the past, Lenny was the insider showing Midge the ropes as she tried to break into the comedy world. Now, they’re on more even footing. “We’re sort of exploring that dynamic — the good things that come with that, the complications that come with that,” Kirby says.

This, in turn, pushes Midge to grow. “She looks up to Lenny Bruce, but there aren’t any women doing what he’s doing in this space,” Brosnahan says. “So [Midge is] figuring out how to carve a brand new path for herself without a roadmap, and that’s exciting and terrifying and puts her into new spaces and new styles of comedy that we haven’t seen from her before.”

As for whether Midge and Lenny will ever act on their clear romantic tension, Brosnahan admits she’s never been able to imagine what it would be like for the two to cross that line. “He’s her mentor and her friend and I think, next to Susie, probably the person she trusts more than anyone,” she says. Kirby adds that he isn’t sure when “the right time” for Midge and Lenny to get together would be — though he knows it certainly “wasn’t at a crap motel in Miami.”

“Maybe [at a] hotel,” he offers. “Somewhere where there’s an elevator ride at least.”

More like this
'That '90s Show' Star Callie Haverda Got Advice From Mila Kunis & Ashton Kutcher
By Brad Witter
Everything To Know About The 'Daisy Jones & The Six' TV Series
By Maxine Harrison and Brad Witter
The 'Hunters' Creator Wanted The Series Finale To Serve As A "Catharsis"
By Brad Witter
At 28, Debra Jo Rupp Was Living A Much Different '70s Show
By Grace Wehniainen
Get Even More From Bustle — Sign Up For The Newsletter
From hair trends to relationship advice, our daily newsletter has everything you need to sound like a person who’s on TikTok, even if you aren’t.