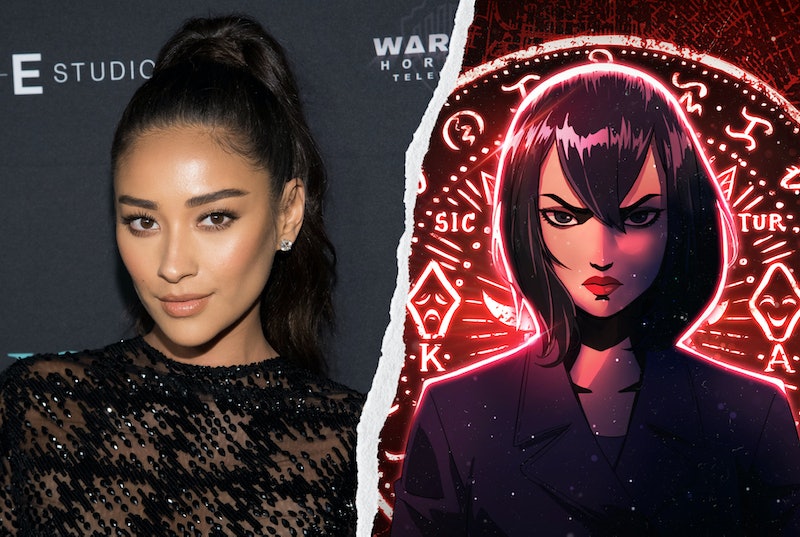 This post contains spoilers for season 1 of Trese. If you’re looking for a new comic series to watch with a strong female lead, look no further than Trese, Netflix’s latest original anime that premiered on Thursday, June 10. When police are stumped over supernatural cases happening in modern-day Manila, they call Alexandra Trese. Voiced by YOU star Shay Mitchell, the titular heroine is a mandirigmang-babaylan (warrior-shaman) who solves crimes committed by creatures based on Philippine mythology, often fighting them with a dagger in close combat. Throughout the series’ six episodes, she fights with a tikbalang (werehorse), aswang (shape-shifting monster), and a tiyanak (vampire baby), among others. With such an action-packed plot and a trove of new creatures, mythology and anime fans alike are wondering, will there be a Season 2?

“I am wondering the same thing about Season 2!” Mitchell tells Bustle. The Filipino-Canadian actor calls her character Alexandra a “total force” and “the epitome of a strong female character,” adding that it was “super fun” to voice her but also “pretty intense in a good way,” especially since she had to brush up on her Tagalog for the role.

“My mom is Filipino, so while I am definitely familiar with Tagalog, I am by no means fluent,” she shares. “Countless hours” were spent on Zoom with a dialect coach, she reveals, adding, “I wanted to do the language and culture justice.” Calling Trese “such a special project,” Mitchell adds, “I am so happy to be a part of the team bringing Trese to life so we can showcase something so special about Filipino culture.”

The detective-style anime is based on the award-winning black-and-white comic book series by Philippine-based writer Budjette Tan and artist Kajo Baldisimo, who have collaborated on at least seven Trese books. While there’s no word of a second season in the works yet, there’s definitely a lot of material and more characters to pull from. Further, Trese is part of the streaming service’s larger 2018 initiative to adapt more Asian stories, including other anime series like Pacific Rim, Altered Carbon, and Yaksuke. The series is produced by Shanty Harmayn and Tanya Yuson of BASE Entertainment and directed by Jay Oliva (Legend of Korra), who is also working on another untitled mythology-based anime series for Netflix. So knowing how popular the comic series is and Netflix’s business plans, Season 2 isn’t totally out of the question.

Those familiar with Filipino folklore easily recognized the characters from the anime series — Mitchell included. “Oh man, I grew up on these stories,” she says, adding, “My mom and her family always did a good job of sharing, but some of the characters were totally new to me.” Now that she’s also a mom to daughter Atlas, she “definitely” wants to impart the lore to her daughter, saying, “I would love for my mom and aunts to share these stories with her as they did with me.” She adds, “I do feel more connected to this part of my identity as the experience has been super immersive, educational, and I got to work with a great team of fellow Filipinos.”

Ahead of the Season 1 premiere, Filipino band Up Dharma Down, who sings “Paagi,” the official song, held an audience-less “Not ALive Concert” on June 10, where fans sent in videos of themselves singing to be included in the Facebook live stream. Fans wasted no time taking to social media (using the show’s own Alexandra Trese emoji) to react to episodes and call for a second season.

Some fans lauded the series for the detail-oriented animation of Manila’s streets as well as what they deemed as nods to societal issues, while others revealed they had the hots for the, uh, not-fully-human characters.

Fans who clamor for a second season definitely have reason to hope. After all, that extra credits scene at the end of Episode 6 introduces a fanged, red-eyed, and long-haired woman wreaking havoc in the streets of Manila, hissing “Trese.” A new villain, perhaps?

This post will be updated as more details about Season 2 are released.

More like this
'Bridgerton' S3 Teases Exciting Social Season For Penelope Featherington
By Bustle
The First Trailer For 'That '90s Show' Includes So Many Nods To The Original Series
By Jack Irvin, Alyssa Lapid and Grace Wehniainen
The ‘Emily In Paris’ Season 3 Trailer Teases Major Career & Love Crossroads For Emily
By Bustle Staff
The 'Wednesday' Creators Are Already Discussing A Potential Season 2
By Brad Witter
Get Even More From Bustle — Sign Up For The Newsletter

This article was originally published on June 10, 2021