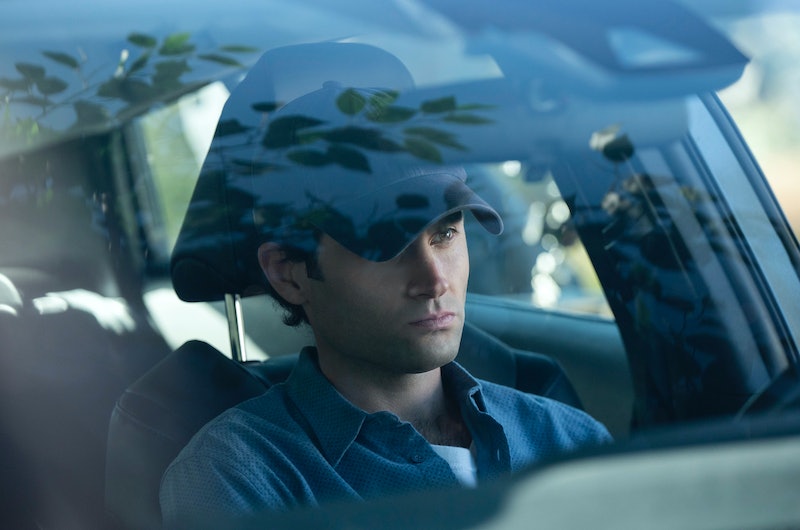 Joe and Love’s happily ever after is, unsurprisingly, more of a nightmare on YOU. Though Season 3 opens with the murderous couple newly hitched and settling down in Madre Linda with their infant son, things quickly spin out of control, leading to affairs and a growing tally of dead bodies. The two try attending couples therapy to work through their issues, but the divide between them ultimately proves insurmountable.

In the finale, Joe prepares to leave Love and run away with his librarian boss Marienne. Before he can do so, Love tries to temporarily paralyze him with wolf’s bane, hoping to talk things through. But Joe is a step ahead of her. Already having taken the antidote, he injects her with a fatal dose of poison. Afterward, he writes a fake suicide note from Love that takes responsibility for the murders of Natalie and Gil, the imprisonment of Cary and Sherry, and surprise, the murder of Joe himself. (To convince people that he’s dead, Joe burns their house down and horrifically cuts off two of his toes to bake into a pie.)

Once again a free man, Joe heads to Paris and adopts a new identity to hunt for Marienne, who’s been warned about Joe by Love. There are few details about what this will mean forYOU Season 4, but fans already have a couple theories.

Joe Will Return to New York

The teaser trailer announcing YOU Season 4 heavily revisits Joe’s obsession with Beck and the deaths of both her and Peach in New York. Is it possible that Joe’s many crimes will finally catch up with him in Season 4, forcing him to return to his roots?

Ellie Will Track Down Joe

After killing journalist Delilah in Season 2, Love planned to implicate Delilah’s sister, Ellie, in Henderson’s death. But Joe intervened and sent Ellie away. In Season 3, we find out that Joe has continued to send Ellie money. But faking his own death and moving to Paris may make it more difficult for him to contact her. It would be interesting to see Ellie become a sleuth like her sister and track Joe down.

Joe Will Move to Florida

Though YOU Season 3 diverged significantly from Caroline Kepnes’ third YOU book, You Love Me, the fourth season could still incorporate the ending of the novel. After a series of murders, Joe relocates to Florida, where he opens a bar-slash-bookstore. The books ends when a customer walks in and catches Joe’s eye. Is it possible the person who can finally stop Joe is living in Florida? Or will he just continue to repeat his cycle of stalking and murder no matter where he goes?

Marienne Will Take Joe Down

Joe’s love interests usually wind up dead, so it feels significant that Season 3 ends with Marienne still alive. Not only does she know that Joe is bad news, she also has a daughter she’ll do anything to protect. If Joe finds Marienne, we might see her rise to the occasion and take him out. Her being the “final girl” would be a fitting inversion of Joe’s own story. He’s always defended his actions by saying that he had a bad childhood, but so did Marienne, and she’s not a serial killer!

Joe Will Find a New Obsession in Paris

It’s also possible that Joe will simply find a new woman to terrorize in Paris. One Reddit user joked that Joe’s next victim could be Emily, the American influencer from Netflix’s hit show Emily in Paris. Emily, if you see an eight-toed man hobbling around, just loudly pronounce that you hate reading and move along.