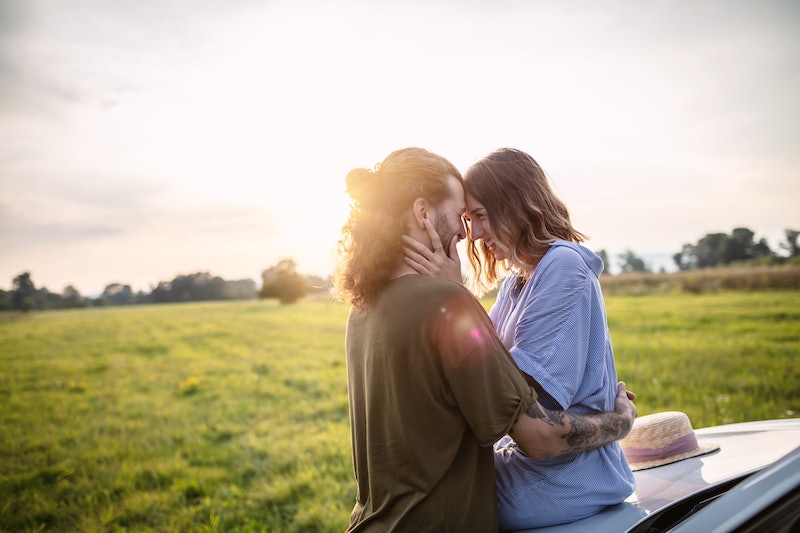 The word “clingy” rarely conjures positive associations when it comes to relationships. When you think of a clingy person, you’re probably picturing someone suffocating their partner with constant affection, or someone who falls to pieces if they have to spend any meaningful time away from their other half. But, according to sex therapist Vanessa Marin, that less-than-flattering portrait might not be giving the partners we label clingy as much empathy as they deserve.

“My general approach on clinginess is usually that it's coming from a place of anxiety and fear rather than from a place of controlling,” Marin explains. “I think [the word] implies a certain judgment. I think people who are exhibiting clingy behaviors are really coming from a place of insecurity. They've probably had lots of experiences in the past where people took advantage of them or broke their trust.” So we might call it clingy if a boyfriend can’t stop calling their significant other, but on the other end of that phone might be someone trying to deal with an extreme worry that perhaps something happened to their partner, or maybe they’re out cheating on them at that very moment.

Still, that isn’t a reason to excuse the behavior. A partner whose insecurities and fears result in a smothering relationship isn’t healthy for anyone, no matter how well you can empathize with their concerns. Here are some signs of clingy behavior that are worth paying attention to.

1. They Are Always Blowing Up Your Phone

If you find that you’re constantly getting a barrage of calls and texts, Psychologist Nicole Martinez Psy.D., LCPC, has some insight on this oft-labeled clingy behavior.

According to Martinez, jealousy and clinginess often go hand-in-hand. Martinez said, “People who are jealous and insecure will tend to cling to their partner as a means of keeping a closer eye on them.” Part of that, Martinez added, is wanting to feel like they know what their partner is doing at all times. If it feels like your partner is constantly keeping tabs on you in this way, it may be a red flag to take note of.

If their behavior springs less from jealousy and more from fear and anxiety, Marin explains they may continue the calls and texts, and act hurt when you finally do get in touch. Regardless of the motivation, it’s an important behavior to address together.

2. They Feel Insecure Around Your Attractive Friends Or Co-Workers

Marin explains that seeing you hanging around with your super hot pals or even professional acquaintances might trigger insecurity in someone with clingy behaviors. Beyond the expected fears that infidelity may be a concern, that partner could get lost in a spiral of comparison.

According to Marin, it might make them ask themselves things like, “‘Oh my God, is that person more attractive than I am? More desirable than I am? Smarter than I am? More charming than I am?’” This kind of reaction further underscores the connection between clinginess and insecurity.

3. They Come On Too Strong With Social Media

Does your partner constantly post about you guys? Did they want to be ‘in a relationship’ on Facebook a little too soon? Have they been grilling you about a person standing in the background of a picture you posted four years ago? According to Marin, this might be a sign of clingy behavior. She also sees a lot of “checking in” on a partner on social, like wanting to keep tabs on who they’re following, who they’re leaving comments for, etc. It can be a particularly tricky issue when it comes to random ‘hot person’ accounts that aren’t mutual friends. It triggers that insecurity of, “Well, why are you following them?” Marin explains.

Some people don’t mind their partner double tapping hot pictures of butts all day on Instagram, and others get very insecure and maybe even clingy as a result because of it. The trick, Marin explains, is about understanding your limits as a couple. “I try to coach couples around defining the boundaries that feel good for them. So there might be some couples who say, ‘I don't care, it's on social media, nothing's happening in real life.’ But there might be other couples for who it feels like it's bordering on cheating,” she says. “So it's something that every couple is going to have to navigate for themselves. And it's definitely tricky when you're just dating and not really talking a ton about what kind of guidelines and rules you want to have for your relationship,” she adds.

4. They Hate It When You Go Out Without Them

If your partner reacts negatively at the prospect of your hanging out with your friends without them, that’s a sign to pay attention to. According to Martinez, a clingy person will often spend much of the time spent away from their significant other worrying about what they’re doing. For you, a night out might seem like a chance to let off steam and catch up with friends — for them it could translate to a night home worrying on the couch. “A clingy partner would feel the desire to want to spend as much time together as possible, and would probably be asking you to schedule a lot of things, and maybe get hurt or upset if you make plans with other people,” Marin adds.

Martinez said it could go the opposite way as well. If they have plans without you, they might feel unable to enjoy that time away from you, and might spend most of it thinking about you, what you’re doing, and when you’ll be together again. For people that value alone time (something that is very important for anyone in a relationship), this can present a difficult situation.

5. They’ll Tag Along Everywhere, Even Without An Invite

This is one of those signs that on a surface level appears like just an inconvenience — picture a puppy following you from room to room — but is actually veering more toward sinister. Showing up uninvited, Marin explains, is a sign that the behavior might be more controlling than clingy.

“The clingy person would have the desire to just spend a lot of time together, but might not necessarily take the step of actually hunting you down,” she says, adding that dropping in unannounced could be a signal of a partner wanting to check up on you, survey who you’re spending time with, and make sure you’re on your “best” behavior. This type of behavior is a big red flag, Marin says, and could be indicative of coercive control.

6. They Don’t Seem To Have Their Own Friends Or Interests

Clingy partners may leave their friends, hobbies, and interests behind in favor of aligning themselves with yours. Martinez explains, “Clingy partners tend to make their partner their whole world.” So if they used to love badminton but quit in favor of joining your rec kick ball team, this may mean they don’t feel secure enough to have interests of their own — especially ones that don’t include you.

“There can be a such a desire for closeness that that person's willing to mold themselves to fit into the person that they think you would be most attracted to,” Marin adds. This often comes from a fear that they’re not good enough as they are, and a desire to become the perfect partner, she says.

7. They’re Holding Back Their Real Opinions

When it comes to a clingy partner, they’re likely to try and share opinions they think you’ll agree with. If you want to order pizza for dinner, then that’s what they’ve been craving all day. If you thought the best picture Oscar nominees were all overrated this year, then they agree, all those films were trash!

“They're trying to create closeness at the expense of their own needs and their identity,” Marin says. “So I think they would be pretty tuned into, ‘What is it that this person wants to see from me?’”. Marin adds that you’re unlikely to see a slow decline into this type of deference to a partner, and that it would probably be present from the start of the relationship.

8. You Need To Constantly Reassure Them Of Your Love

No matter how many times you say it, they want you to say it once more. In any relationship, all of us expect a certain amount of reassurance that our partner loves us, but clingy partners take this to the extreme. This might be due to their constant need to be reassured of the soundness of the relationship and to overcome that relationship insecurity.

“The sad thing is that often, no matter how much the partner gives, or allows, it will never be enough to make the [other] partner feel trusting and secure in the relationship,” Martinez says.

Obvious as it may seem, it’s an important sign to address nonetheless. Clinginess can certainly manifest physically, be it a need to constantly hold hands or pack on PDA by way of kisses and touching when you’re out and about. “They just want to always be touching you and have some sort of physical contact. They can be soothed by that level of contact,” Marin explains.

But, she adds, this is where things can get tricky, because people have different tolerances for levels of touch. “To one person it feels like, ‘Oh my God, my partner is so clingy.’ And to the other person, it feels like, ‘Wow, my partner just hates being touched!’”. So before writing someone off as clingy, it’s worth exploring if it may in fact be your personal sensitivity to touch that’s creating or adding to the tension.

What To Do About A Partner Who’s Too Clingy

If many of these points are resonating with you but you still want believe the relationship is worth working on, there are things you can do to improve the situation. Martinez offered her advice, noting that you first need to make it a point to set healthy boundaries with your significant other as soon as possible. According to Martinez, this means explaining to your partner the importance of spending an equal amount of time together and time apart. Martinez said if you work to make this balance the ‘norm,’ you’re helping to set a good pattern for the relationship.

Martinez added, “If the partner continues to struggle with these issues, and they care about them, they may want to suggest individual therapy as a means of working on where these issues and needs are coming from. Another option is a few couples therapy sessions where they are able to set ‘ground rules’ and talk about where each of their needs come from. From here they can come to compromises.”

Marin adds that there may be some internal interrogation for you to work on, too. “There are definitely red flag behaviors that we want to look out for with partners and discuss with them before they get bigger and more serious,” she says. “And at the same time, I think these kinds of things are opportunities to check within ourselves and say, okay, is this a red flag about this person, or might there be something coming up for me around this?” It might be more about the dynamics between you two that are stirring something up, and not necessarily that one person is clingy and one person is distant, full stop. Sometimes people can be different with different levels of needs, and that dissonance causes conflict. Figuring out your potential triggers and contributions to that dissonance can help push the conversation forward.

It’s important to remember that clinginess has many different root causes, and while certainly alarming, may not be the relationship death sentence it seems. With open communication, empathy, and clear boundaries, you and your partner can develop a much healthier outlook — and give each other a little space.

This article was originally published on April 13, 2016