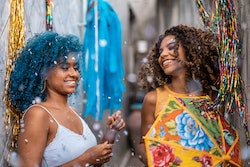 There’s no stopping two fire signs in love. When Aries and Leo first meet, they won’t be able to keep their hands off each other and will have no problem jumping into a relationship right away. But how long will the flame burn between these two last? Aries and Leo’s compatibility has all the info on what you need to know about this hot duo.

“A keyword for the Aries-Leo relationship is ‘dynamic,’” astrologer Jayde Young tells Bustle. “These fiery trailblazers like to act now and think later. They intuitively see eye-to-eye on most things and are ready to hit the ground running without the need for an extended conversation. As a result, this pairing feels like a match made in heaven for both action-oriented signs. They are extremely in tune with the others’ style of expression.”

The Mars-ruled Aries is highly competitive, desire-driven, and loves the chase. Once someone catches their eye, they will pursue until they’re victorious. While that type of approach may put some signs off, it’s perfect for the zodiac’s lion who loves being pursued and put on a pedestal.

“The alluring, regal, and striking magnetism of the Leo draw in the challenge-loving Aries like a moth to a flame, while Leo is impressed by the courage and assertiveness of the ram who, unlike most, isn’t intimidated by the Leo,” Young says. “Leo knows exactly how to draw the attention of the Aries in ways that keep the fire burning, which Aries finds eternally stimulating.”

Since they’re both fire signs, they tend to be compatible across the board. When it comes to love, they both go all-in. “Neither are shy or demure, so the relationship tends to be very straightforward,” astrologer Clarisse Monahan tells Bustle. “This is not a duo who play games with each other, both thriving on directness.” Neither sign will be put off or threatened by their partner’s way of speaking. They’ll also understand each other’s need for alone time in the relationship. Keep reading to learn more about Aries and Leo’s compatibility in relationships, friendships, and more.

The bedroom is where things get really good between these two. According to Young, Leos love to “wow,” while Aries love being “wowed.” Being the natural showman, Leo will enjoy putting on a sexy show for their Aries partner, while the ram will love the fact that it’s a show only meant for their eyes only. They’re both spontaneous and love trying new things, so their sex life never gets stale. Since they both value directness, neither partner will have a problem asking for what they want in bed.

The emotional compatibility between Aries and Leo is also pretty strong. As Inbaal Honigman, celebrity psychic and astrologer, tells Bustle, “Leos are more mature than Aries, but they both understand what makes the other one tick. Two fire signs have an affinity with one another, and when one is feeling impatient, stressed or furious, as fire signs often do — the other one will be able to relate.”

They’re both very passionate signs who’ll have no problem letting each other know how they feel early on. This is one zodiac couple likely to say they fell for each other at first sight, and will take things to the next level pretty quickly. However, these two will rarely ever sit around have deep conversations about their feelings. “They'd rather do stuff than feel stuff, which is why they enjoy each other's company so much,” Honigman says.

When it comes to communication, Aries and Leo won’t have a hard time understanding each other. According to Honigman, Leos communicate honestly and tactfully. They like to be open about what they like, but they also try their best to not upset anyone. Aries also likes to communicate directly and honestly, however, they tend to lack the tact that Leos have. “As much as they don't like to offend, they hate lies and deceit,” Honigman says. “They'd rather tell you the truth as is, right now, than be polite about it and disappoint you later.”

Fortunately, Aries and Leo “get” each other from the beginning. Even if Aries says something that can come off as offensive, Leo wouldn’t take it as personally as a Cancer or a Scorpio would. Since they’re fire signs, it’s easier for Leo to brush things off and move forward.

When it comes to arguments, these two passionate signs can get very into it. They both can be very stubborn and competitive, and won’t listen to the other’s side. “It will basically never end,” Honigman says. If they’re both willing to take a step back and let things go, especially for very minor things, these two shouldn’t have problems communicating.

As friends, Aries and Leo can be a little more challenging. According to Honigman, these two could compete with each other over who’s better looking, smarter, or more fun. Although Aries isn’t one to seek out the spotlight, they naturally get it due to their leadership ability and outgoing nature. This might make Leo feel threatened as they love being at the center of attention. If they don’t allow their egos to get in the way of their friendship, these two could have a really fun friendship that lasts. If not, they may always consider themselves rivals or frenemies.

The Biggest Potential Problems In An Aries And Leo Relationship

Although they are highly compatible, Monahan says, “two fire signs can be quite combustible together.” One of the biggest sources of tension between these two is their egos. Aries rules the first House of the Self, while Leo is ruled by the sun, which governs the self, ego, and self-image. According to Monahan, this duo can get “stuck in a battle of wills.” Fortunately, neither is prone to holding on to anger or hurt feelings. These two have the ability to talk it out and move forward.

Leos tend to have a fragile ego at times and need lots of words of affirmation in relationships to feel secure. “The impulsive and impatient Aries may, at times, inadvertently trample on and not express the required amount of patience for the sensitivities of the Leo,” Young says. Leo may feel like their Aries is insensitive, while Aries will feel like Leo is too sensitive.

Are Aries And Leo A Good Match?

As long as they don’t let their individual egos get in the way, Aries and Leo have what it takes to make it work. “If there is one relationship that has the potential to stand the test of time while maintaining fiery passion, it’s the dynamic between the ram and the lion,” Young says. “This is one union that has the potential to keep the fire burning for years and decades to come.”