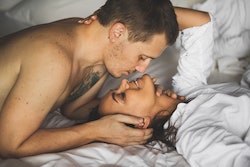 When Aries and Scorpio get together, it’s a relationship that’s oh-so-wrong yet feels so right. For one, Aries is pure, action-oriented, fiery energy, while the watery Scorpio is deep, emotional, and introspective. Aries is direct, and what you see is what you get. With the mysterious Scorpio, you never really know what’s going through their head. There are a lot of reasons why these two shouldn’t work out. But when the sexual chemistry is out of this world, there’s no way these two will let each other go that easily. Aries and Scorpio’s compatibility will tell you what you need to know when the two most passionate signs in the zodiac get together.

“This relationship is best defined as an aggressive dance between fire and water,” Elisa Robyn, Ph.D., an astrologer and astrology transitions consultant, tells Bustle. “Water evaporates with too much fire, and the fire is quenched by water. Both signs are ruled by Mars, with Scorpio also ruled by Pluto. This combination can lead to shared aggression, with a bit of darkness. Neither sign is known for tenderness, so this can be a relationship full of battles that leads to making up passionately.”

It’s an intense pairing that if they were to break up, it’ll be a relationship neither one will get over easily. As Inbaal Honigman, celebrity psychic and astrologer, tells Bustle, two are “twin souls.” Read on to learn more about Aries and Scorpio’s compatibility in relationships, friendship, and sex.

Forming an emotional connection is going to be one of the biggest struggles between these two signs. Scorpios feel things deeply and need to share their thoughts and feelings with their partner. On the other hand, Aries gets easily bored by discussions that don’t lead to action and results. “Aries can feel drowned in the scorpion’s emotional waters, while the Scorpio might feel shattered and rejected,” Robyn says. They’ll have to work hard at understanding the other's emotional needs, which will be a real challenge for these two. For Scorpio, who wants to bond with their partner on a deep level, Aries’ way of handling emotions may be a deal-breaker.

Intellectually, Aries and Scorpio make an OK match if there’s a topic that interests them both. Aries can get very enthusiastic when they talk about things they’re passionate about, and Scorpio will love seeing that side of them. Scorpio is also willing to explore new and unusual topics, while Aries will find that fascinating. However, Scorpios tend to become obsessive and will explore everything there is to know about a certain topic. Aries isn’t like that and tends to get bored easily. As a result, Scorpio will see Aries’ short attention span as a sign that they’re shallow.

Despite being emotionally and intellectually incompatible, Aries and Scorpio are highly compatible in bed. “These two signs come together powerfully when sex is involved, much like a nuclear reaction,” Robyn says. Due to their shared Mars ruler, there’s a strong magnetic attraction between these two and a lot of passion between them. They will fight for dominance and push each other’s sexual limits.

If a sexual relationship is the only thing Aries and Scorpio want, both partners can work really well. However, it can get complicated over time. According to Robyn, Aries likes sex to be a physical experience without deep emotions involved, while Scorpios love the game of seduction and a deep soul-level connection. Even if they don’t end up working out, this is a relationship that neither sign will be able to forget.

When it comes to communication, the ram and the scorpion communicate in different ways. “Aries are forthright, tactless, and straight-to-the-point, whereas Scorpio prefers to keep the mystery alive,” Honigman says. “However, they understand each other on a metaphysical level.” Aries can somehow see through Scorpio’s subtlety in a way that no other sign can. Scorpio, on the other hand, seems to get why Aries values the truth and isn’t put off by their directness. Even though they have different communication styles, this won’t be a big problem area in the relationship.

As friends, these two can work out pretty well. According to Honigman, Scorpio and Aries could meet in so many different places from underground clubs to animal rights demos to book clubs. “They are both very passionate signs and will share a passion for anything they encounter.”

Aries is the more extroverted sign, so they may have to push their more introverted friend to go out and socialize. Since Aries is an independent sign, Scorpio can choose to not go out and this won’t really bother them too much. Aries will push Scorpio to try new things, which they’ll secretly appreciate. Scorpio, on the other hand, will always be there to listen to Aries and be their emotional support system. It’s a friendship that seems to work out for both of them.

The Biggest Potential Problem Area In An Aries And Scorpio Relationship

One thing that may cause some tension between the two signs is ego. “Aries is ruled by Mars, the energetic and chaotic red planet, which makes them direct, hyperactive, and powerful,” Honigman says. “Scorpio is said to be ruled by Pluto, which represents death and rebirth, but in classical astrology, Scorpio was also ruled by Mars. Because of this, Scorpio is also active, strong, and fearless, but in a more subtle and mysterious way.” These two have strong personalities but Aries can also be a bit selfish, while Scorpio can be a bit stubborn. If they ever find themselves on opposing sides of an issue, they could be in arguments that last for days or even weeks. Since Mars is their ruler, these disagreements could become explosive.

Are Aries And Scorpio A Good Match?

Overall, an Aries and Scorpio relationship will take a lot of work as they are considered incompatible zodiac signs — but it is possible, especially if they can find shared activities besides sex. According to Robyn, each person will have to accept the other's needs, learn new communication skills, and find common ground emotionally and intellectually.

This article was originally published on March 11, 2021