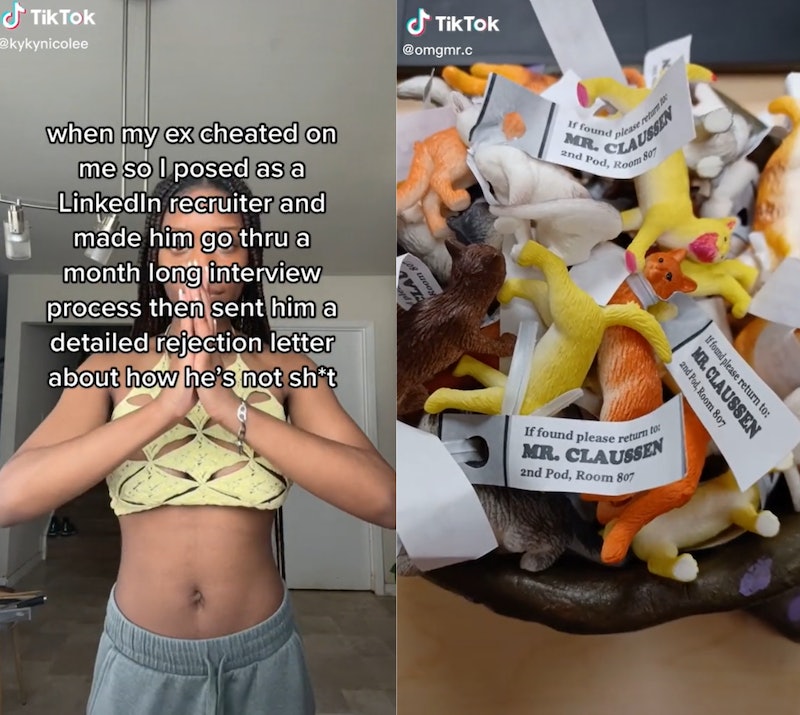 Prank content, one of the founding pillars of internet culture, is alive and well on TikTok. Playful tricks played on parents and significant others have always gained views and clicks on the app, but the tides are changing. Blame it on the “villain era” if you’d like, but petty pranks are back in style and you don’t have to wait until next April Fool’s Day to get in on the fun.

These trends are not for the non-committal, viral TikTokers are executing the most elaborate pranks with their whole chests. Recording original songs, creating fake identities, hiding hundreds of tiny figurines, all of that and more is being done for the joke. So next time you quarrel with your neighbor or waste a weekend on a Hinge demon, don’t get mad — get mischievous, and while you’re at it, go viral. Why leave up to karma what you can pull off today?

What better way to tell your roommate, “Your music sucks,” than by saying exactly that over their Bluetooth speaker.

TikTok user, @matt_obrien, recently went viral for his creative response to his loud upstairs neighbors, which he shared in a video that has since gained 1.6M likes and 8.8M views. Connecting to the neighbor’s speaker via Bluetooth, he blasted an original song with a clear message: Your music sucks, please turn it down. The comments section praised him with words like, “This is the level of petty I aspire to be,” to which he replied, “I was just nominated for best petty at the 2022 petty awards 🏆.”

If you’re looking to hit someone where it hurts, try their LinkedIn page.

In early April, one user went viral on TikTok when he shared the devious April Fool’s prank his friends played on him. Posing as recruiters, his friends arranged a fake interview for a prestigious engineering internship. They left no stone unturned, sent an initial outreach email with a fake headshot and contact information, and arranged a Zoom interview. He put on his best button-down shirt and prepared for the interview of a lifetime only to enter the Zoom and see his three friends suited up.

The creativity doesn’t stop there. The user and prankee, @cmoney42, dropped more insight in the comments section of the video, saying, “In one of the email chains, the first letter at the start of each sentence spells April Fools.”

Another icon, I mean, TikToker, @kykynicolee, pulled a similar prank on her cheating ex. Her viral video, which now sits at 2.7M views, reads “when my ex cheated on me so I posted as a LinkedIn recruiter and made him go thru a month long interview process then sent him a detailed rejection letter about how he’s not sh*t.”

Remember Easter egg hunts? This viral prank is kinda like that except much, much worse. A teacher on TikTok, @omgmr.c, gained some virality in late April by showing the internet his prank experience.

A fellow teacher at his school planted more than 70 tiny, plastic cats around the campus, each tagged with a small note reading “If found, please return to Mr. Claussen.” As he says, “The story doesn’t end there.” It turns out, his colleague and prank competitor didn’t actually buy the tiny plastic cats himself — TikTok did. In the video, which now has 892k views, he shows a small Amazon receipt that reads “I trust you know what to do with these. From a TikTok fan in Florida.”

Why prank once when you can prank 170 times?

Since the beginning of time on TikTok, materials gworls have been the butt of the joke for their 10-step skin care routines, pricey microcurrent devices, and face slugging. Through this oh-so-satisfying viral trend, users are turning the tables and proving that men can care just as much about the arch of their brows as their partners do. The “eyebrow” prank utilizes the “thin eyebrows” filter, which has been used in more than 206k videos on TikTok.

A simple two-step prank, girlfriends are convincing their boyfriends to let them “trim” their brows every so slightly, running the dull end of a dermaplane razor across their brow bone, and showing them their new look via front camera, which is noticeably altered via filter to look like 90’s-era thin brows.

Looking for a prank just brutal enough to exact revenge on that friend who Facetunes herself but leaves you looking like a live photo? One user, @emiliaa.a0, played the prank long game with her boyfriend earlier this year by subtly editing his head to be slightly larger in every photo they took together. His response? “I love that picture.” Since posting, her video has gained 10.6M views, and her boyfriend noticed.

More like this
Ashamed Of Your Screen Time Stats? Here's How To Change That
By Alexis Morillo
How To Turn Off TikTok Profile Views So You Can Stalk Other Accounts In Secret
By Alexis Morillo
Learning To Love, Not Judge, The Lunchbox Wives Of TikTok
By Esther Zuckerman
This Wordle Rival Is Taking Social Media By Storm
By Sam Ramsden
Get Even More From Bustle — Sign Up For The Newsletter
From hair trends to relationship advice, our daily newsletter has everything you need to sound like a person who’s on TikTok, even if you aren’t.