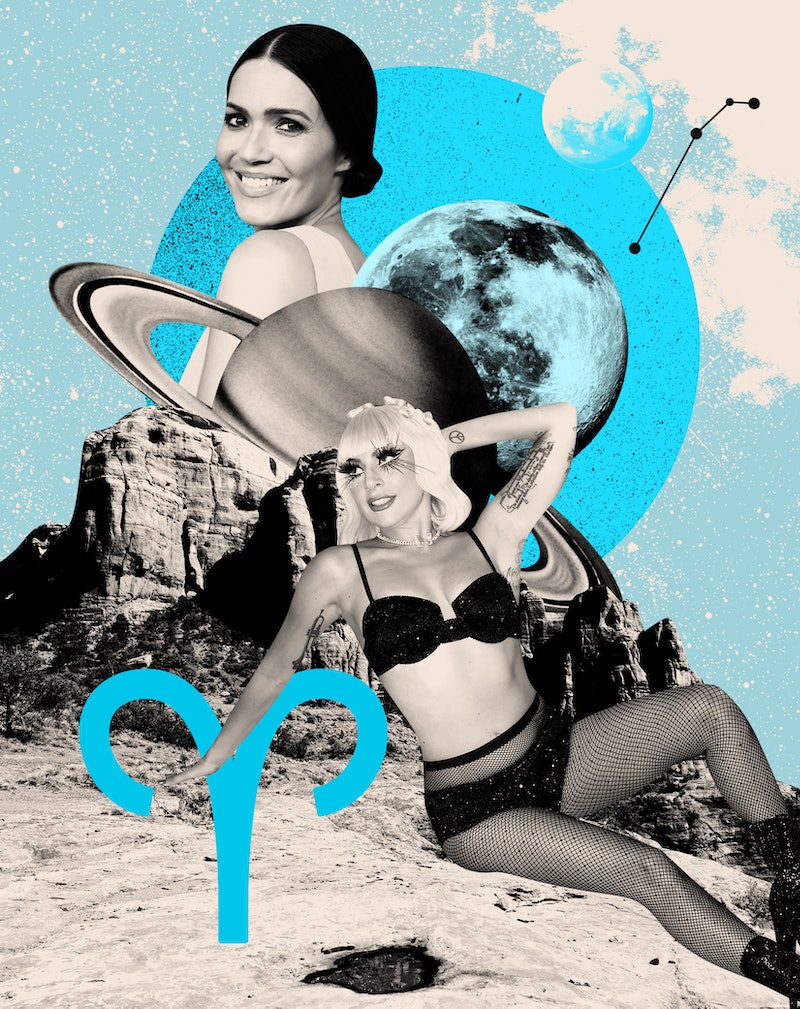 Sharing a zodiac sign with another person doesn’t guarantee you’ll see eye to eye on things. In fact, many of the zodiac’s rams feel like March Aries and April Aries may as well be butting heads with each other. This makes sense, as even if we share sun signs, the placement of the other planets in our birth charts will differ based on the year, day, and moment that we’re born — meaning we’re all one-of-a-kind cosmic beings. But are there any astrologically-backed differences between a March Aries and an April Aries? In short, yes, but it’s more complex than you’d think.

There are plenty of reasons why two people who share a sun sign could still have different personalities. Our birth charts are chock-full of many important planets and points, some of which can shift signs in a matter of hours — so while being born between approximately March 21 and April 19 definitely means you have an Aries sun sign, your moon, Mercury, Venus, Mars, and rising zodiac signs could vary wildly. All rams share some core Aries qualities, but they may have big distinctions in the way they present themselves, conduct relationships, show their emotions, and go after their goals, depending on the other placements in their birth charts.

However, there’s even more to know when discussing why Aries personality traits can vary so widely. One important factor is the concept of decans, which are subdivisions within each zodiac sign that can change the way the sign’s energy is expressed. Each sign is broken down into three decans, and each decan is comprised of 10 degrees on the zodiac wheel (every sign takes up 30 degrees total). The first 10 degrees of a sign make up the first decan, the second 10 degrees go to the second decan, and the last 10 degrees are assigned to the third decan. The sun travels about one degree per day, which means that most March Aries are first decan Aries (with the exception of those born on the last day or two of the month), while all Aries born in April are either second or third decan Aries.

Let’s check out some of the differences between March Aries and April Aries with decans as our foundation — as this astrological concept can help to reveal some of the many complex layers of the zodiac’s cardinal fire sign.

Aries’ ruling planet is maximum-powered Mars (aka the planet of passion), but all April-born Aries are either second or third decan Aries — meaning they have secondary co-ruling planets that influence the way their Aries energy radiates. Because first decan Aries (born in March) are ruled entirely by Mars, they often come off as the most textbook Aries and embody the sign’s stereotypical strengths and weaknesses. Think being impulsive, headstrong, and take-charge.

Aries are known for being one of the boldest and bravest signs of the zodiac, but April-born Aries may be even more drawn to life’s wild side than March Aries. This is because about half of April Aries are co-ruled by lucky planet Jupiter, which is all about saying yes to adventures and expanding our horizons. This free-spirited planetary influence emphasizes the thrill-seeking and risk-taking ways of April Aries — so they’re extra liable to take a gamble on something and throw caution to the wind in the name of excitement.

March Aries are first decan Aries, meaning they’re solely ruled by ambitious planet Mars — an influence that exacerbates their feisty competitive streaks. While all Aries love a good challenge and are fueled by the thrill of winning, March Aries are likely to be even more zealous and assertive about taking the crown. These Aries will do just about anything to ensure they come out on top and crush their competition, whether they’re playing a board game or climbing the corporate chain.

Aries are one of the fire zodiac signs, so their presence is always bright, warm, and full of sparkle. But about half of April Aries (as well as those born during the last days of March) are second decan Aries, meaning they have the sun as their decan’s planetary co-ruler. This imbues them with an even deeper drive to succeed and an unshakeable sense of confidence — even more so than their March-born counterparts. The sun is the center of our solar system, so these Aries can’t help but strut their stuff and attract the spotlight wherever they go.

As the first sign of the zodiac, all Aries have the potential to be strong leaders, but March Aries were practically born with a torch in their hand. As first decan Aries who were arguably blessed with the heftiest serving of Mars’ action-oriented energy, these boldly energetic rams are fearless when it comes to starting new things and venturing into unknown territory.

April Aries Can Be Party Animals

It’s no secret that Aries love to have a good time, as these impulsive fire signs love to follow their passions and say yes to excitement. But all Aries born in April are second or third decan Aries, meaning they’re co-ruled by either the attention-grabbing sun or Jupiter (planet of abundance). These two planets sprinkle some extra gregarious and happy-go-lucky energy to Aries’ already-high-energy vibe, which could make some April Aries major party animals. These fun-loving rams love to go big, make a scene, and steal the show.

More like this
These 3 Signs Are The Master Chefs Of The Zodiac
By Kristine Fellizar
These 4 Zodiac Signs Make The Best Bridesmaids
By Nina Kahn
The Zodiac Sign Pairs Most Likely To Have A Sibling Rivalry
By Kristine Fellizar
February's Full Snow Moon Will Breeze Right By These 3 Zodiac Signs
By Brittany Beringer
Get Even More From Bustle — Sign Up For The Newsletter
From hair trends to relationship advice, our daily newsletter has everything you need to sound like a person who’s on TikTok, even if you aren’t.