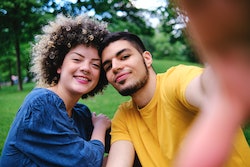 When Cancer and Capricorn get together, it’s a relationship that’s sweet, sincere, and enduring. But personality-wise, these two are very different. The Cancer crab is shy, caring, and deeply emotional, while the Capricorn goat is practical, serious, and stoic. It’s a combination that shouldn’t work, but somehow does. In fact, these two complement each other really well. Cancer and Capricorn’s compatibility shows why this pair of opposite signs make a surprisingly solid match.

“As the old saying goes, opposites attract,” astrologer Theresa Reed tells Bustle. “Capricorn and Cancer are opposing signs, but they’ll find plenty of reasons to come together. Both signs are loyal, so it’s easy for them to build trust.”

In general, earth and water signs tend to get along well. A water sign like Cancer can help to bring out the softer and more emotional side of the earthy Capricorn, while the practical nature of an earth sign can help ground a water sign and bring more stability to their life.

In this case, Cancer is the zodiac’s happy homemaker who loves making sure that their loved ones are taken care of. They’re nurturing and there to meet their partner’s needs. Capricorn, on the other hand, works hard at providing for themselves and their family. According to Reed, Cancer loves how secure their Capricorn makes them feel, while Cancer will give their partner the love and support they need, but have trouble asking for. It’s a relationship that benefits both partners.

Cancer and Capricorn compatibility in bed is pretty high. For one, these two like to take things slow. They’ll likely date for a while and make an effort to get to know each other before taking things to a more physical level, an approach that will help benefit them both.

“Capricorn has a hard time relaxing, but the crab knows how to get them to chill out with luxe meals, sensuous back rubs, and plenty of PDA,” Reed says. “Once Capricorn lets their guard down, these two have no problem merging. Cancer will help Capricorn get in touch with their sexual side.”

Once Capricorn opens up, Cancers will find themselves pleasantly surprised. As Kristina Semos, astrologer and owner of AstroOils, tells Bustle, Capricorn likes to be the boss both in and out of the bedroom. “They like to be the ‘alpha,’ while Cancer likes to soothe and nurture,” she says. Cancer is all about pleasing their partner, and will love how much Capricorn likes being in charge.

This is an area of their relationship that may require some work. For one, these are two signs that value their security, so opening up emotionally can take some time. Capricorn doesn’t know how to express their emotions well, and may rely on Cancer to take the lead on that. “When they realize the other is trustworthy and legit (as they both are), they can form an epically strong attachment that lasts a lifetime,” Semos says.

Cancer is a highly sensitive water sign. They feel things very deeply, take things personally, and can get a bit moody. As an earth sign, Capricorn isn’t as in tune to their feelings. Instead, they’re more reserved, practical, and have a tendency to compartmentalize. It’s easier for them to separate their feelings from a situation. That can sometimes come off as cold or uncaring to a Cancer, especially if they want their partner to understand why they’re feeling the way the way are. Capricorn, on the other hand, might find Cancer’s ever-changing moods a little off-putting. According to Reed, these two will need to practice a bit of patience with each other if this is going to work.

When it comes to communication, Cancer and Capricorn don’t exactly make the best match. According Stina Garbis, professional astrologer and psychic, Capricorn is direct, composed, and tends to say what needs to be said in the moment regardless of how they come off, while Cancer is much more emotional and tends to blurt out their emotions whenever they need to express themselves. Because they communicate differently, Cancer may see Capricorn as cold and emotionally unavailable, while Capricorn may see Cancer as irrational or needy.

“This couple may have a hard time working together unless they are really good at practicing communication, which is a learned skill,” Garbis says.

Fortunately, both Capricorn and Cancer are patient and commitment-oriented. Although it may take some time for them to truly understand each other and make adjustments to the way they express themselves when they’re together, they should be able to communicate in a way that doesn’t leave them hurt or frustrated.

More often than not, zodiac opposites like Cancer and Capricorn tend to attract. However, they don’t always make the best match, like Taurus and Scorpio or Leo and Aquarius. Although Cancer and Capricorn are two signs that oppose each other in the zodiac wheel, their dating compatibility is pretty high. According to professional astrologer Frederic Hoffmann, they’re two sides of the same coin.

“This polarity may bring some great creative energy to their relationship,” Hoffman says. “Cancer is a water sign that needs to feel emotionally safe, and Capricorn is an earth sign that needs to feel materially secure. When combined, the water and earth elements can feed each other very well.” It’s a very well-balanced relationship, where one partner has what the other lacks.

When it comes to friendship, Cancer and Capricorn compatibility is good. “As friends, they can accomplish a lot as they each have a part to play and play it very well,” Garbis says. “They can be like a well oiled machine with Capricorn playing the front man and Cancer orchestrating everything from behind the scenes.”

Since Cancer doesn’t have the same expectations for friends as they do for romantic partners, they can happily support Capricorn’s big dreams without feeling neglected. If Cancer is ever in a mood, they won’t have to rely on just Capricorn to help them work thorough things, which helps to keep the peace in their friendship. Both signs are very loyal, so they can have a friendship that lasts a lifetime.

Even the most compatible zodiac signs have their share of problems. With Cancer and Capricorn, there are a couple of big areas that need some work. For one, Capricorn is known for being goal-oriented, ambitious, and hard-working. They have no problem putting in the extra hours at work to finish up projects or make some extra money. While Cancer appreciates that about their partner, they won’t like how their job constantly gets in the way of their relationship. This may affect how they act towards their partner. According to Semos, “Cancer can sometimes err on the side of being too clingy. They can get so wrapped up in their feelings and may do more to care-take, while Capricorn just needs to go to their ‘goat cave’ to chill out.” Cancer might take this personally, as they tend to do, and may shut their partner out.

Another big potential issue between Cancer and Capricorn is communication. According to Reed, Capricorn is analytical and serious while Cancer is sentimental and speaks from the heart.

“If they don’t find the middle ground, grudge matches are possible,” Reed says. “Once again, patience is needed. Capricorn needs to learn to listen to Cancer’s feelings without judgment, and Cancer will also get further with Capricorn if they don’t allow drama to escalate.”

Are Cancer & Capricorn A Good Match?

Despite their issues, these two can last because they’re both commitment-oriented. Once they feel like they’ve found “the one” in each other, they will do whatever it takes to make things work. They share a lot of the same basic values, they’re both loyal, and they balance each other out really well. Cancer and Capricorn are a highly compatible zodiac match, and they’ll make one great couple.

This article was originally published on Aug. 2, 2021