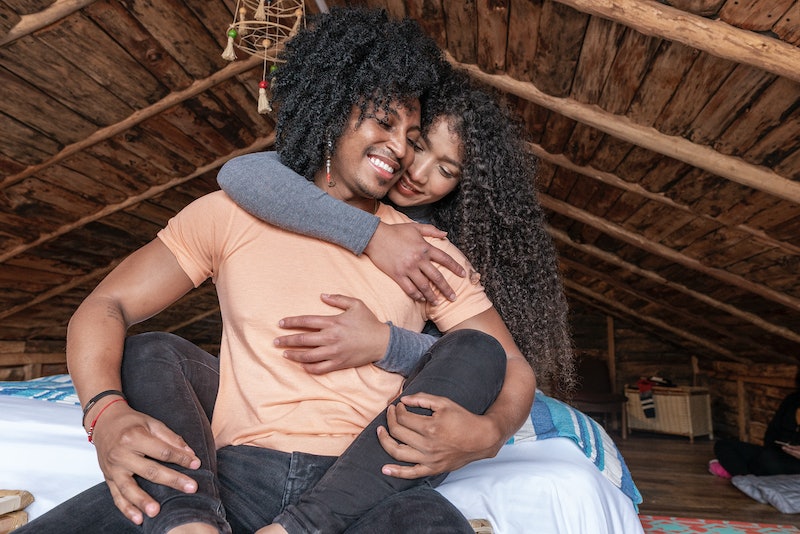 Opposites attract when the fiery Leo lion and airy Aquarius water bearer first meet. The cool and aloof Air sign will be dazzled by Leo’s confidence and energy, while the lion will love Aquarius’ sharp mind and unique way of looking at the world. These two won’t be able to keep their hands off each other due to the fact that they’re opposite zodiac signs. But making a relationship work can also be quite a challenge when you have two signs with completely different personalities and ways of approaching love. Leo and Aquarius’ zodiac sign compatibility has everything you need to know about this Fire and Air duo.

“A Leo naturally lights up a room with their smile and charm, and an Aquarius will always be the first to notice and be drawn in like a magnet,” predictive astrologer Crystal B, tells Bustle. “Cupid’s arrow strikes these two hard — and fast. One can’t deny the instant attraction and a sense of ultimate connection. When these two come together it’s like they’ve known each other for a thousand years.”

But given that these two are polar opposites in the zodiac wheel, they may need to work a little harder at finding a middle ground. According to Crystal B, an ability to diffuse drama, abandon stubbornness, and deal with detachment issues will be necessary to make a Leo-Aquarius relationship work.

“I always get a sense when opposites come together that there are karmic matters to contend to,” she says. “Each side has mastered their view point but needs their polar opposite to prompt them to see the other side. Relationships reveal our strengths and weaknesses, and those revelations will be strong with this connection.”

When it comes to sexual compatibility, Leo and Aquarius are a solid match. According to Crystal B, the sexual connection between the lion and the water bearer will be sizzling hot in the beginning. Dramatic role-play scenarios, experimentation with sex toys, and a little bit of sexual mind play are what you might find in a Leo-Aquarius relationship. These two are at their best when they’re “intertwined in the throws of sexual intimacy,” and sex is one aspect of their relationship they don’t need to worry about.

Leos bring romance, passion, and enthusiasm into the bedroom, while Aquarius is always looking for ways to push the envelope in order to keep things fresh. In general, Fire and Air sign couples typically work really well in bed because air fuels fire. In this case, “Leos quickly become kittens in the arms of their favorite Aquarian,” says Crystal B. And Aquarius is more than happy to take the lead.

Although Leos tend to enjoy more romance than Aquarius is typically willing to give, they love being with Aquarius because they’re playful, fun, and different. These two bring out each other’s primal side in a way that no other zodiac sign can. No matter how many times these two argue or breakup, they’ll likely find a way to keep coming back for more.

Leos come off cool and confident on the outside, but on the inside, they’re sensitive. Since they’re ruled by the Sun, which represents the Self, Leos tend to have big egos. If they feel personally attacked in any way, they’re not above making a scene. They’ll slam doors, burst into tears, and go into lengthy emotional rants over how their partner did them wrong. After all, this sign is all about the drama.

Aquarius is considered to be one of the least emotional signs in the zodiac. They’re intellectuals who make decisions based on logic and reasoning over their feelings. They don’t handle complicated emotions well, and keep a lot of their feelings to themselves. It can even take them forever to come to terms with that fact that they’re in love with someone because they’ll spend hours thinking about what “being in love” actually means. In a relationship, Aquarius’ aloofness can be mistaken for uncaring to the more passionate and outspoken Leo.

According to Stina Garbis, professional astrologer and psychic, Leo and Aquarius’ approach to love and relationships also differ. Leo’s ideal partner is someone who will worship the ground they walk on. They love being the center of attention, and need a lot of reassurance and affection from their partner to feel secure. Aquarius, on the other hand, is independent and needs a lot of freedom in their relationship to want to stick around.

“Worldly Aquarius is more focused on relationships as a whole, and how the partners balance each other and make the world a better place, and may not be in the mood to cater to Leo’s every need,” Garbis says. “If Leo comes off too selfish or controlling in any way, Aquarius will get bored and find a reason to leave.”

The Biggest Potential Problem Areas In A Leo-Aquarius Relationship

How this duo speaks to each other might be a problem in the relationship. According to Garbis, Aquarius needs to be mindful to not “blow out Leo’s creative fire.” While Aquarius can appreciate their partner’s creativity, they can also be a bit of a know-it-all. Aquarius don’t believe in sugarcoating things and may accidentally say things that hurt their partner, even if they intended to provide helpful suggestions.

Leo, on the other hand, can be a bit demanding in relationships, especially if they feel like they’re not getting the kind of attention they deserve. This will easily irritate the freedom-loving water bearer, who will respond by ignoring their partner to take some time to themselves.

Another big issue here is the fact that they’re both fixed zodiac signs. Although having a fixed modality means these two are stable, loyal, and commitment-oriented, they’re also stubborn and set in their ways. According to Crystal B, each have their own way of doing things.

“Once the fireworks settle, they could find themselves battling for control,” she says. “Honoring each other’s side and finding a middle ground will be a key factor of being able to stick things out for the long run.”

So, can this pair of opposite signs work long-term? The good news is, all zodiac pairings, regardless of compatibility, can last. But some pairings require more work than others, and that’s the case here with Leo and Aquarius. According to Crystal B, these two have the kind of connection that’s written in the stars, but that doesn’t mean it’s going to be easy.

“The key to unlocking its greatest potential will be found in each side’s ability to give a sense of control over to the other,” she says. “Some are up for the challenge of letting go, while others aren’t. .. Once they make up their minds, they each go in whole heartedly. Being fixed, when they make a commitment it has the potential to last over several lifetimes.”