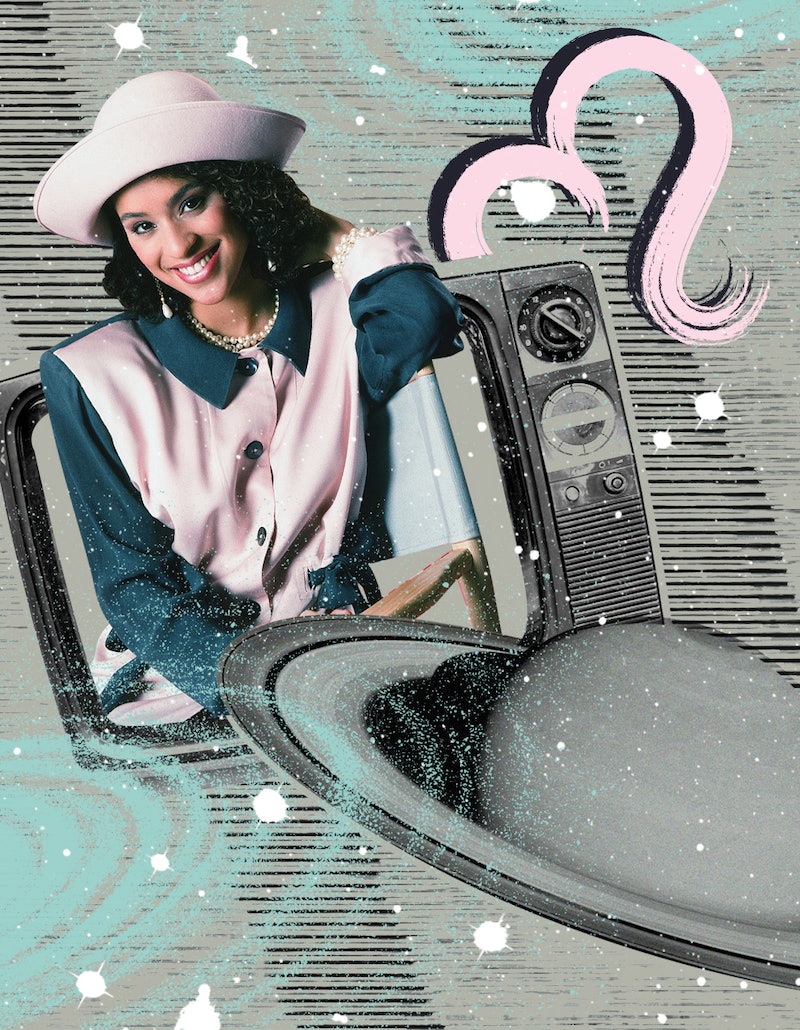 In Astrologically Speaking, astrologers make the case for fictional characters’ zodiac signs, based on specific scenes, quotes, or fashion choices. Here, astrologer Astrodim explains why Hilary Banks from The Fresh Prince of Bel-Air is an obvious Leo.

Nineties babies rejoice: The dramatic Fresh Prince refresh, titled Bel-Air, heads to the small screen on Feb. 13. Peacock’s retelling of the series focuses on the darker side of Will Smith’s move from west Philadelphia, as well as the rest of the Banks family’s backstory. While the concept of a prestige-style reboot of the classic sitcom has gotten some fans flipped turned upside down, it presents a perfect opportunity to reminisce about the show’s best characters, including one of television’s iconic older sisters, Hilary Banks. In the original show, Hilary, played by Karyn Parsons, was stylish, self-assured, and a little vain, which led me to think about Hilary’s zodiac sign.

“When I think of Hilary Banks, I think of her [dynamism] and instantly think of her having prominent Leo energy,” the astrologer Astrodim tells Bustle. Technically, fan sources say that the character was born on Aug. 18, 1969, which would make her a Leo sun sign anyway, but Astrodim says that you don’t have to know her birthdate to know she’s a Leo — you can tell by her flashy outfits and how dramatic she can be.

Keep reading for more evidence that backs up why Hilary is a surefire Leo.

Self-assurance is Leo’s hallmark, and Hilary doesn’t shy away from any opportunity to shine. The fact that she hosted her own talk show, appropriately called Hilary, is evidence alone for her love of the spotlight. “Leos know their worth and expect you to know it as well,” says Astrodim. “Even if you don’t, they will still walk around knowing that what they bring forward has worth and importance.”

Another Leo trait is the ability to recognize your own allure. “Hilary was very confident in her beauty, inside and out.” For example, take when she complains to Will about not having a date in Season 5, Episode 8: “I’m a beautiful woman trapped in an even more beautiful woman’s body,” she says. Of course, even in a fit of frustration, a Leo never loses sight of their appeal.

She Has A Sharp Fashion Sense

When it comes to fashion, Hilary has always got her best dress on, which screams Leo behavior, because the fire sign is always dressed for a special occasion. “Throughout the show, we saw the evolution of Hilary’s style in ’90s fashion, [even though] she is iconically known for her big beautiful highlighted curls, her bright and bold clothes, and her ornate hats and accessories,” explains Astrodim. “Leos are also known for their long and thick tresses, as it is similar to their zodiac symbol — the lion[s] and their manes. Leo also rules [the element] gold, which can explain her iconic golden blonde highlighted curls.”

Those flashy outfit choices can sometimes be out of touch, too. For instance, in Season 1, Episode 3, Hilary boasts, “Congratulate me. It took all day but I finally found the perfect pair of alligator pumps to wear to the Save the Everglades rally tonight.” (Yikes.) “Leos are known for having a “the bigger the better” attitude when it comes to fashion and are known for sometimes being too gaudy with their approach to clothes and accessories,” Astrodim says.

Despite the show centering on Will, Hilary has serious main character energy — and she knows it, considering her career on television. In relationships, she sets the bar high. “Another example [of Hilary being a Leo] is when she was getting engaged to be married in Season 4. She watched her fiancé [propose by] bungee jumping from a bridge on national television as she wore a wedding dress. Unfortunately, that ended tragically,” says Astrodim. Leave it to a Leo to expect a grand gesture to prove their devotion.

“Leos love being the center of attention and know, by doing that, they need to put their best foot forward at all times,” explains Astrodim. For a Leo, the world is their stage, and their mission in life is to entertain. Hilary certainly knows how to make an impression — remember her transition from a gorgeous wedding gown to an equally lavish funeral dress after her almost-fiancé’s fatal bungee fall?

Hilary reads like a textbook Leo. She’s invested in herself and what makes her happy, even if it sometimes seems selfish. She has an innate predisposition to fashion, a colossal ego, and a fun-loving outlook on life, but despite believing the world orbits around her, she’s a warm-hearted older sister with a heart of gold — some of the fire sign’s most recognizable characteristics.