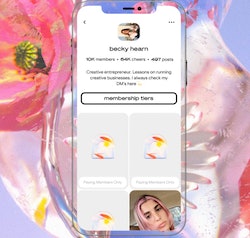 A vertical scroll down Sunroom, a new creator monetization app launched on Feb. 2, reveals a carefully curated collection of artful cool girls beckoning for you to join them behind the paywall. Adorned with sans-serif fonts and Glossier-meets-Coachella graphics, it’s clear the app, built by Hinge and Bumble alums, speaks fluent Gen Z.

Co-founders Lucy Mort and Michelle Battersby created the social media platform in order to give women and nonbinary creators a safe space to monetize their content, particularly sex-adjacent material that might be prohibited on other apps. Inspired by a year of talking to users about the censorship issues they faced on existing platforms, Mort and Battersby aimed to create an app that would feel more supportive.

“We’ve heard of stories of creators being de-platformed for speaking openly about childbirth, receiving life bans for life for posing in lingerie, lost access to DMs for being too opinionated, content removal for spreading messages about body positivity and inclusivity, and losing the ability to put links in stories for educating on sexual wellness,” Battersby, Sunroom’s chief marketing officer, tells Bustle. Unlike larger platforms with a higher volume of creators, Sunroom has only 200 creators at launch; that means they have the bandwidth for a small team of female moderators who, according to Mort, are “welcoming” of posts referencing sexuality that other platforms might object to. “Sunroom promotes and celebrates this content, instead of burying and banning it. We’re proudly sex-positive,” Battersby says.

That said, unlike, say, OnlyFans, the app that made subscription-first social media a thing, you can’t post overt porn on Sunroom. “Sunroom exists on the App Store, which means we must abide by Apple’s content moderation guidelines,” says Battersby. However, you can be an adult content creator on other platforms without worrying about being shadow banned on Sunroom as a result. “We don’t consider women posing in lingerie to be nudity or sexual activity as others do,” says Mort, Sunroom’s CEO. “We don’t consider stories about childbirth and breastfeeding to be inappropriate, and worthy of permanent bans as other platforms have done in the past.” While Sunroom’s moderation guidelines allow for posts to touch on sexuality and pleasure by adult creators, you’ll also find PG programming from podcasters, athletes, entrepreneurs, and artists using the app as an extension of their other online presences.

Sunroom joins a fleet of subscription-based apps that let people make money off of their followers. Per venture capital firm SignalFire’s 2020 report of creator economy trends, there are over 50 million people who consider themselves professional creators in the U.S., and as of 2021, OnlyFans alone hosted over a million. Platforms like Twitter, TikTok, and Instagram have all added functions that allow users to tip creators in the last few years, too.

Smaller platforms, like Sunroom, fill the gap between Instagram and OnlyFans with hands-on moderators and a larger focus on fewer creators. Curious how the platform works? Here’s what you need to know.

How To Join Sunroom

To create a Sunroom account, head to the App Store and download the iOS app for free. (It’s not currently available for Android.) To become a member, you’ll need to enter a valid phone number and verify it with a code. Then you’ll add your email address, create a username, and start scrolling through creators.

The interface is a mix between TikTok and a dating app. You can tap the person’s username to see more media, bio information, and subscription tiers, or just keep swiping. Membership to the mobile-first Sunroom app is free, but limited. Without entering your credit card information, you’ll only be able to see a small preview of posts, and will not be permitted to DM creators or comment on posts.

When you join the app, you’ll have 100 free Beams in your wallet. Beams are Sunroom’s virtual currency, which can be used to send Cheers (similar to likes) and to tip people in their DMs. Beams are sold in bundles from $2.99 for 60 or $199.99 for 5,000. You’ll need to purchase Beams to tip and cheer creators you don’t subscribe to.

Joining Sunroom as a creator involves submitting an application attesting that you’re a cis or trans woman or nonbinary person with over 2,500 social followers, among other criteria.

When you subscribe to be a paid member of a creator’s posts, you’ll get access to all of their content and unlimited comments and DMs without having to tip. If you don’t want to pay for a membership, you have to tip creators to interact. Creators set their own prices for subscriptions, but the range is between $1 and $30 per month. To subscribe to a creator, tap their username, head to their profile, and tap “membership tiers.” The next page will show you what the creator charges per month, and what that fee includes, like unlimited commenting or DMs. Tap the price to purchase a subscription.

If you want to subscribe to an account that has sensitive content, which Battersby describes as having “sex-positive or pleasure-positive themes,” you’ll have to update your settlings to show you are over 18 and open to potentially NSFW posts. When you sign up for the app, this setting is automatically toggled off, so you won’t get any surprises if you’re cruising the app for the first time at your office lunch break.

How Sunroom Compares To OnlyFans

Like on Only Fans, Sunroom posts are mostly hidden behind a paywall, and fans have to subscribe to creators to get access. Creators on both platforms get to pick their own subscription fee and are paid 80% of revenue earned from memberships, while 20% goes to the platform. (Black, Indigenous, or Hispanic creators are eligible for a reduced platform fee, per the app’s creators page, based on self-identification.) Fans and members can support creators with a combination of tips and in-app purchases on top of subscriptions, and creators are able to charge for custom services like private messaging and more.

While Sunroom onboards sex workers as creators on their platform, the app doesn’t permit pornography, which is the most obvious way the platforms are different. Though OnlyFans wavered on its stance on adult content back in October 2021, they quickly reversed their ban after backlash from creators, making it one of the only platforms that hosts explicit content.

Another way that Sunroom stands out is its stance on exclusivity and privacy. The majority of Sunroom’s 200 creators can’t be found on other monetization platforms, though you can find all of them on Instagram or TikTok, making their Sunroom posts exclusive. The app also offers an anti-screenshot feature called SunBlock which makes sure that content posted on Sunroom stays exclusively on Sunroom (and not leaked to people you don’t want seeing it). By contrast, OnlyFans leaks are shockingly common — on Feb. 12, an Indianapolis Colts cheerleader said she was fired after her OnlyFans photos leaked on Reddit.

Sunroom also promises prompt responses to moderation issues. Because their moderation team is in direct contact with every creator, they can respond to harassment issues and other complaints within 24 hours. “A reason for our creator application process is so we can ensure consistency and accuracy with reporting and moderating,” Battersby adds. Reports on OnlyFans are not guaranteed to be addressed within a certain time period, though they do state on their blog that their safety team will “investigate your report as a matter of urgency and take the relevant action deemed necessary.”

Still not sure if Sunroom is your cup of tea? Head to the homepage and scroll through suggested accounts. Most creators introduce themselves and their work in a short, friendly video so that you can get an idea of what your money will buy you before you spend it.