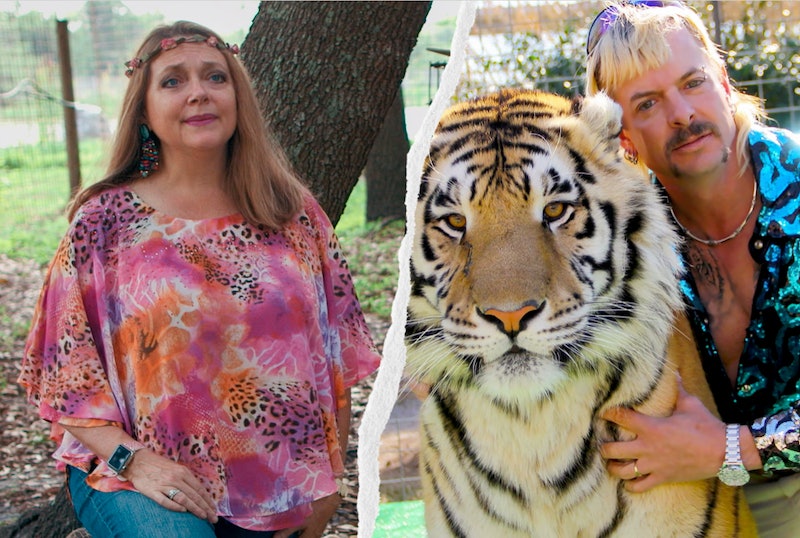 Hey all you cool cats and kittens. If you spent all of early lockdown engrossed in the instant phenomenon that was the Netflix series, Tiger King: Murder, Mayhem and Madness, then you dove deep into the bizarre, eccentric, and disturbing underbelly of the ethically questionable exotic animal breeding world — and got a taste of the personal drama between several big cat enthusiasts (with even bigger personalities) in various parts of the country.

For many, Tiger King will be forever synonymous with March 2020, when there wasn’t much to do besides obsess over the true-crime goings on of former zoo owner/big cat breeder Joe Maldonado-Passage, aka Joe Exotic; founder of Big Cat Rescue animal sanctuary Carole Baskin (Joe's arch nemesis); and Bhagavan "Doc" Antle, one of Joe's mentors and fellow private zoo owner. But just when you thought the first season of the show had you topped off on capital-d Drama, Netflix announced that Season 2 of Tiger King would be coming to Netflix on Nov. 17. The new installment will include previously unseen footage as well as catch-ups with “old friends and frenemies” about how the original doc, which was watched by 64 million households, impacted them.

The plot of the show, of course, hinges on the dynamics between the three enigmatic main characters, and what better way to unpack their interplay than astrology? In order to get to some of the cosmic dirt under the surface of the show's intrigue, Bustle looked at the birth charts of Joe, Carole, and Doc, and spoke with astrologers to get their take on some of the major cosmic goings-on between the three. The astrological drama is, ahem, wild.

"The Grand Trine Of The Big Cat Universe"

Let's start by looking at some of the major themes and connections between the birth charts of Joe (born March 5), Carole (born June 6), and Doc (born March 15).

Firstly, all three are mutable signs. Joe and Doc are both Pisces Suns (emotionally driven water signs), while Carole is a Gemini Sun (a mentally driven air sign). Mutable signs are the most multi-faceted, adaptable, and versatile of the zodiac, so it makes sense that these characters are drawn to chaotic situations and lifestyles. "This is the type of sign that feels most comfortable when not prescribing to the daily expectations of routine and structure," astrologer Leona Moon of Leona Moon Astrology tells Bustle. "So it's no surprise they all have more unconventional day jobs that allow them to create their own schedule with flexibility and constant stimulation."

Another standout cosmic alignment between Joe, Carole, and Doc's astrology is the heavy presence of water sign energy in their charts, which indicates that emotion is a major driving force behind each of their lives and personalities. Looking at their birth charts combined, Joe, Carole, and Doc's planets form an auspicious planetary alignment that astrologer Clarisse Monahan of Venus In Retrograde describes as the "grand trine of the big cat universe."

"Grand trines are considered lucky and rare ... and the particular planets [involved in this one] speak to a strong, almost otherworldly link between the trio," Monahan tells Bustle. "If we look at their synastry, together they activate what is known as a grand water trine."

Interestingly, Joe and Carole each have grand water trines in their birth charts, too. "When people have trines, they tend toward excellence or talent or fame in a given field," Monahan says. And both Joe and Carole are certainly getting their 15 minutes of fame after Tiger King.

Let's zoom in on the astrology chart of the show's leading man, Joe, who is currently serving a 22-year sentence for his role in a murder-for-hire plot against Carole Baskin, as well as other crimes including killing tigers and trafficking endangered animals. "Joe has some pretty difficult aspects in his chart, namely involving Chiron, the 'Wounded Healer'" Monahan says. "Chiron tends to exaggerate your pain or trauma, and [Joe's aspects] tend toward an excess of emotional energy that may erupt if not channeled correctly."

Joe's intense energy is only emphasized further by the element of water being so prominent in his chart. "His chart is heavy with water sign energy, which makes him highly emotional," says pop culture astrologer Kyle Thomas. "His Neptune is in Scorpio, which makes him highly persuasive and perhaps even emotionally manipulative ... [and] his Pluto is directly opposed to his Sun in Pisces, which shows he is passionate about control."

Carole Baskin’s Zodiac Sign: A Gemini Willing To Put Up A Fight

Carole is an airy Gemini, but shares a highly emotional cosmic thread with Joe given her moon in sensitive Pisces. "Carole is exceptionally passionate about being heard and all sorts of writing and communication (which is clear in her animal activism)," Thomas says. "Geminis are known for their need to write, speak, and carry their message, which makes her highly intellectual, vocal, and communicative — however, with a Pisces Moon, she, too, can be prone to self-delusion and martyrdom."

She's also got a very notable Mars placement: "Carole has Mars (planet of war) in Leo (a big cat), and her whole life has basically been a long battle around... big cats," Monahan says. Leo is a fire sign, ruled by the all-powerful Sun, and is represented by the symbol of the lion, coincidentally — so to have such a bold and aggressive planet here illustrates that someone won't be quick to back down in a fight. And of course, it just so happens that this fight is centered around big cats themselves.

Doc Antle’s Zodiac Sign: A Pisces Within His Own Fantasy World

Doc, like Joe, is a Pisces Sun, which means his emotions are at the core of what drives him. "Pisces are exceptionally sensitive and emotional people and can become entirely consumed by their feelings," Thomas says. "They often are not living entirely within the real world and are prone to seeing the world from fantastic perspectives."

Pisces is ruled by the planet Neptune, which Thomas notes is affiliated with "things that are exotic or different" as well as "cult-like phenomena" — which makes sense when we take a look at the compound where Doc lives with his multiple wives/employees and hundreds of wild animals.

And to no one's surprise, we've got more big cat energy in the form of Leo's lion-ish influence in Doc's chart, too. "Doc Antle has his Uranus in Leo, and while this isn't as much as a personal influence, it does indicate that the way he rebels and innovates is with a Leo flair," Moon says. "His big cat [business] is certainly a way to stand out as an individual." Moon also notes that Doc's Uranus connects with war-planet Mars, which indicates that he "likes to stand out in the way he takes action and makes decisions" — a quality that's clear through the peek the show gives us into his lifestyle.

At the heart of Tiger King is the drawn out battle between Joe and Carole, and astrologically, it makes sense, as there's a ton of cosmic tension between their charts.

Pisces and Gemini aren't exactly a harmonious duo — and there are major clashes going on between both their Sun signs and Moon signs. "They have very little in common from an ideological perspective [because their signs] are 'square' to each other, which represents conflict and challenges when interacting," Thomas says. "Their hatred is further motivated by their Moon signs both being in water signs, which means they take things extremely personally and can have emotionally manipulative tendencies toward people around them."

Remember when we noted Carole's Mars in Leo earlier, and how it meant she wouldn't back down in a fight? Well, it just so happens that Joe shares the very same placement. "Joe and Carole both have Mars in fiery, fixed sign Leo, symbolized by — what else — the Lion," Moon says. "When we see Mars in Leo in a birth chart, this is indicative of a big personality ... There can be an egocentric tendency with this placement if the person isn't mindful or self-aware." As we see in Tiger King, there is a battle of wills taking place amidst the big cat battles, and Joe and Carole's shared ego-driven and competitive Mars in Leo probably plays a big role. This placement speaks to the dramatic, performative, and drawn-out nature of their personal battle.

Even Joe and Carole's placements in Venus, the planet of value, are at odds with one another: "Joe's Venus in Aquarius and Carole's Venus in Taurus form a nearly exact square, indicating tension and differences in their value systems (to breed or not to breed big cats, for example)," Moon says.

Joe and Carole's battle as depicted on Tiger King wasn't pretty, and as it turns out, there truly is an astrological explanation for all the drama.

This article was originally published on April 10, 2020