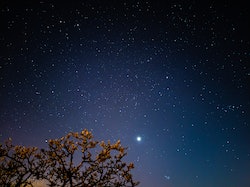 No matter what your personal zodiac sign is, every planet plays a powerful role in your astrological birth chart — every sign has a ruling planet that imbues that sign with its signature characteristics. When it comes to lavish and romantic Taurus, known for being equal parts headstrong and caring, they can thank the brightest planet for giving them some of their defining qualities. The grounded bull loves luxury and comfort, and they’re always looking for the next thing to indulge is — which makes sense when you consider that Taurus’ ruling planet is associated with art, beauty, and love.

In case you haven’t guessed yet, Taurus is ruled by Venus, and the flirty earth signs perfectly embody the planet’s romantic qualities. “Venus is a kind planet that hates drama. Being that Venus rules Taurus, it adds sentiments of love, beauty, and refinement,” astrologer Lisa Stardust tells Bustle.

Not only does getting to know the planet that rules Taurus help you understand the practical earth sign better, but it also helps you understand your own birth chart. Keep reading to learn more about Taurus’ ruling planet and form a new appreciation for auspicious Venus.

All About Venus, Taurus’ Ruling Planet

Venus, the brightest planet in the sky, was first observed by telescope in 1610 by astronomer Galileo Galilei. His observations of Venus helped bring about the understanding that the planets orbited the Sun, not the other way around. In Roman mythology, Venus is the goddess of love, beauty, and fertility, which is similar in astrology, where the planet rules over relationships, both romantic and platonic. “[Venus] urges us to unite and harmonize with others and maintain loyalties,” says Stardust.

Alongside fellow lucky planet Jupiter, Venus is considered to be a benefic planet in astrology, which just means it’s one of the more favorable heavenly bodies. Venus brings abundance in relationships, aesthetics, and finances. When this planet is transiting through the houses, it’s sprinkling a bit of luck in your pockets as well as in your love life.

Venus vibes are also about luxury and indulgence, Marie Antoinette-style. “Venus is known for its decadent lifestyle and party mentality. Anyone who knows a Taurus is aware of their indulgent and sensual vibes,” explains Stardust. Depending on what your Venus sign is, it could define how you express yourself through home decor, fashion, and the material things that bring you joy. If your Venus sign is stationed in native Libra or Taurus, for example, not only are you likely passionate about your idea of love, but you probably have a taste for the finer things, too. Call Tauruses the ultimate material girls.

Planetary rulers govern certain sectors of life, giving each zodiac sign an affinity for those topics or issues. Venus symbolizes all things flirty, artistic, and abundant, so naturally, a Taurus gravitates toward a life of luxury and romance. Because the benefic planet is about peace and common ground, the strong-willed bulls are peaceful at heart, so they won’t instigate confrontation, especially if it threatens their comfort zone — something they value above all else.

That said, while Taurus is a homebody, their Venusian influence helps them to cultivate sincere and solid relationships with others. “Being that Venus is a relationship-oriented planet, it’s important to note that it is all about partnerships and relating to others,” explains Stardust. Their devotion to their relationships allows the loving earth sign to protect and defend their loved ones.

“At times it can make us jealous of what others have attained in the earthly realm, but even that’s not long-lasting,” explains Stardust. “The Bull is tender, sympathetic, unwavering, and slow to temper, which shows how they align.”

More like this
Your Guide To Earth Signs
By Nina Kahn
Eleven From ‘Stranger Things’ Is A Cancer Zodiac Sign, An Astrologer Says
By Brittany Beringer
Here’s Your Fourth Of July Weekend Horoscope
By Mecca Woods
4 Zodiac Signs That'll Have The Luckiest July
By Brittany Beringer
Get Even More From Bustle — Sign Up For The Newsletter