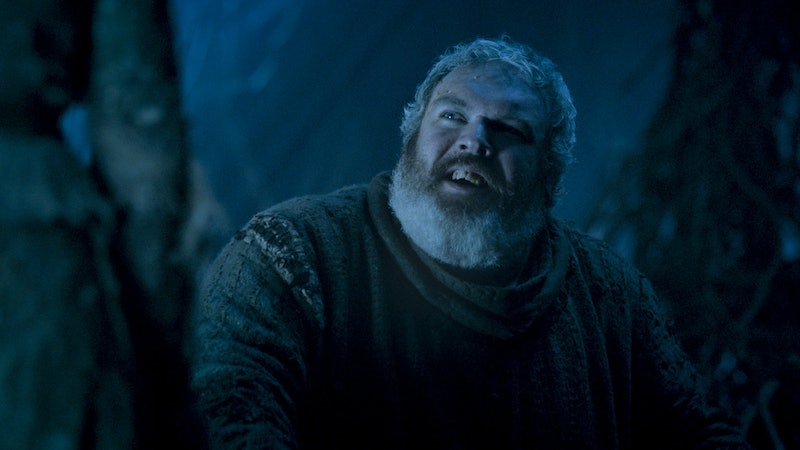 There are a lot of dead characters on Game Of Thrones… which also means there are a lot of dead Game Of Thrones characters that can come back to life to surprise us all in Season 7. Over the course of 60 episodes, the show's body count has reached truly staggering amounts. Actual, named characters who have died over the course of the HBO show's first six seasons have surpassed 100 — and that's not even counting the hundreds more nameless victims of of the violent events: soldiers, peasants, and otherwise innocent bystanders.

But the number of dead characters who have come back to life has slowly started to increase as well. We first saw a resurrection when Beric Dondarrion was brought back to life after his fatal combat with the Hound in Season 3; last season alone saw the returns of Jon Snow, Benjen Stark, and Sandor Clegane (who, to be fair, turned out never to have died in the first place).

So, which other deceased characters could return to Game Of Thrones? There are plenty we can rule out due to their manner of death, whether they were beheaded (Eddard), burnt to a crisp (Shireen), devoured by dogs (Ramsay), thrown out the Moon Door (Lysa), baked into pies (the Freys), incinerated by wildfire (Margaery et al.), or had their heads smushed like watermelon (Oberyn). But there are just as many whose fates were ambiguous or mild enough that it's possible to imagine the writers finding a way to bring them back.

Here are 11 dead Game Of Thrones characters who could conceivably be resurrected this season.

The last time viewers saw Catelyn's brother, he was helping Brienne and Podrick escape Riverrun while the castle was being overrun by Lannister forces. It was later reported that the Blackfish was killed while resisting arrest… but his death was never shown onscreen, leaving a slight chance for a Hound-style "resurrection" sometime in the near future.

When Ygritte died, Jon smartly made sure to burn her body. Nobody had time to do the same for poor Jeor Mormont, victim of a mutiny at Craster's Keep. With his corpse lying unprotected north of the Wall, what's to stop the Night King from reviving him as a wight, just as he did with all those slain wildlings at Hardhome? Imagine the drama of the moment Jon Snow came face-to-face with the undead version of his former mentor, and was forced to kill him again — this time himself.

You know who else was killed north of the Wall without a proper funeral pyre? Poor Hodor, née Wylis, that's who. Assuming his body wasn't entirely ripped apart by the wights during their assault on the Three-Eyed Raven's stronghold, it stands to reason that the simple-minded servant has since been turned into a wight. If Commander Mormont returning would be traumatizing, how about an undead Hodor? I'm getting goosebumps just thinking about it…

Speaking of the Three-Eyed Raven, the ancient greenseer is a character who could easily come back even without officially being "resurrected." Now that Bran has the ability to send his mind traveling through time, he could potentially visit his mentor at some point in the past. Or perhaps the Raven was even able to leave a bit of his consciousness behind in Bran before he died. Who knows?

Now, this would be a blast from the past. In the books, Daenerys doesn't kill Xaro before she leaves Qarth as she did on the show. Rather, Xaro shows up again after Dany becomes queen of Meereen, and offers to provide her with ships if she'll leave Slaver's Bay; she declines his offer and he declares war on the Mother of Dragons.

On the show, Dany seems virtually unstoppable as she sails toward Westeros with her army and her dragons — surely something has to stand between her and total conquest, or the series would be over. What if Xaro somehow got out of the vault he was locked inside and, together with the Warlocks (who already tried to assassinate the khaleesi once with a manticore), makes a surprise appearance to disrupt Dany's travel plans?

Knowing how much Cersei loved her children, and knowing that she has a former maester at her disposal with the ability to resurrect the dead, why wouldn't she stop at nothing to see her beloved Tommen returned to her? Qyburn already brought Gregor Clegane back after he was poisoned by Oberyn's spear — and sure, the Mountain came back a little funny and mute and creepy-looking… but it's easy to imagine a grief-stricken Cersei throwing caution to the wind and ordering her Hand of the Queen to attempt the same feat with Tommen. I'm sure the results wouldn't be pretty.

Although a relatively minor character in both the show and the books, Arya's dancing master became a fan favorite character in his brief appearance. Ever since his apparent death in Season 1 (which, like Brynden's, occurred offscreen), theories have been rampant that Syrio Forel is still alive somehow — perhaps masquerading as a Faceless man named Jaqen H'ghar? However the show explains his survival, it would be great to see Syrio pop up again and help his former student complete her mission of revenge against those who have wronged the Starks.

This is a character who died before the events of the series even began… but if the show picks up a storyline from the books that appears to have been abandoned, then he could be resurrected in the near future. In the sack of King's Landing at the end of Robert's Rebellion, Prince Rhaegar's wife Elia Martell and her two young children, Rhaenys and Aegon, were supposedly murdered by the Mountain.

But in the books, it is revealed that Aegon Targaryen was spirited away to safety before the Sack and replaced with another baby who was killed instead, and was subsequently raised in exile as a blue-haired merchant's son. Now, Daenerys' nephew is also on his way to Westeros to reclaim the Iron Throne — which, following traditional lines of succession, would actually go to him, Rhaegar's son, before his aunt, Rhaegar's sister. Drrrama!

If Aegon died just before the events of Game Of Thrones, then Azor Ahai died long before. A legendary hero who lived thousands of years ago, Azor Ahai wielded a mythical sword called Lightbringer and led the armies of men victoriously into battle against the White Walkers. Prophecy states that Azor Ahai will be born again — Melisandre thought it was Stannis, Kinvara believes it's Daenerys, and most readers theorize that it's Jon Snow — but whichever way this storyline plays out, Azor Ahai is one dead character viewers can be sure will be "resurrected" before the show is ever.

Ever since his death at the end of Season 1, many viewers haven't been willing to accept the fact that Daenerys' first husband is really gone forever; hence the growing number of theories explaining how Khal Drogo will return to Game Of Thrones. Mirri Maz Duur's taunt that the khal would return "when the sun rises in the west and sets in the east" and "when the seas go dry and mountains blow in the wind like leaves" was probably meant to mean that he would never return… but there's actually some indications that her unintentional prophecy is starting to come true.

Never give up hope, Lady Stoneheart truthers! Every season, the show teases viewers with Catelyn's possible resurrection… and every season, like clockwork, it pulls the rug out from under its eager fans. For shame, HBO. Give me some vengeful undead Catelyn already!

While it's unlikely that all 11 of these poor unfortunate souls will come back to life in Season 7, don't be surprised if at least one of these faces pops up to take us all by surprise. (I'm kind of hoping it's Hodor…)