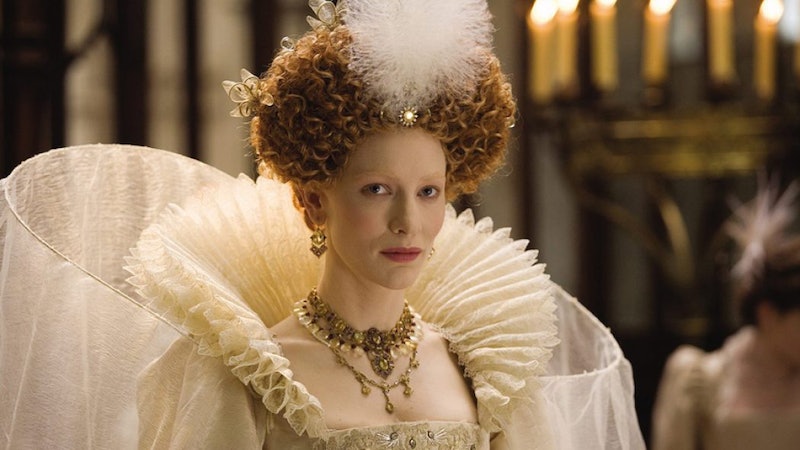 Sometimes you need a bit of an escape from modern world. What a better way to leave behind the trials and tribulations of 2018 than by getting caught up in the dramas of a period movie? There are two options in theaters this season that allow you to get lost in the world of thrones, crowns, and gowns. The Favourite, directed by Yorgos Lanthimos, stars Olivia Colman as 18th-Century Queen Anne with Rachel Weisz and Emma Stone's characters vying to be her righthand woman. The other is Josie Rourke's Mary Queen of Scots, which stars Saoirse Ronan as the Scottish queen who challenged the reign of Elizabeth I (Margot Robbie). And if you love those, there are plenty of feminist period dramas available to stream right now.

Both The Favourite and Mary Queen of Scots highlight how centuries of misogyny and sexism work to keep women in certain places, and how even powerful women had to present themselves and act in a certain way in order to survive in a man's world. But if you can't get to the theater until after the holidays, or if you're clamoring for more after seeing them, there are several other female-driven period pieces that capture the same kind of ambiance and themes. Take a look at the list below for more flouncy trips back in time that feature great female characters, some of which are directed by women, too.

1. The Other Boleyn Girl

Before Queen Elizabeth reigned, her mother had to fight her way to the throne. Natalie Portman stars as Anne Boleyn, Henry VIII's second wife, with Scarlet Johansson as her forgotten sister, Mary. It's not a terribly feminist movie, but it hits the right spot, and Portman's Anne is an outspoken woman at a time when women were expected to keep quiet. That's probably why she lost her head.

The new Mary Poppins herself, Emily Blunt, stars in this period drama about Queen Victoria, who ruled the United Kingdom from 1837 until 1901. She was the longest-reigning British monarch until just a few years ago, when Queen Elizabeth II surpassed her almost 64-year record.

Speaking of Elizabeths, before Margot Robbie wore the red wig, and Claire Foy played the second on TV, Cate Blanchett ruled as Elizabeth I. The 1998 movie follows her early years as a young and naive queen, while the 2007 sequel deals with her at the height of her power, the defeat of the Spanish Armada, and yes, her dealings with Mary Queen of Scots.

Both streaming on Amazon, iTunes, and Vudu.

The Elizabethan era also coincided with that of famed playwright William Shakespeare. This Best Picture-winning comedy stars Joseph Fiennes as the writer in love, while Gwyneth Paltrow plays the woman of his affections, who inspires some of the scribe's most feminist female characters. Dame Judy Dench won her Best Supporting Actress Oscar for only eight minutes of performance as an older Queen Elizabeth I.

Directed by Amma Asante, Belle stars Gugu Mbatha-Raw as Dido Elizabeth Belle Lindsay, the daughter of a slave woman and British Royal Navy Officer who is raised as a noble woman in 18th Century England. The film explores the life of a biracial noble woman who is as privileged as she is an outcast.

Over in 18th-Century France, a young Austrian woman named Marie Antoinette became Queen at just 14 years old. Kirsten Dunst stars as the elaborate and excessive queen in Sofia Coppola's anachronistic jaunt, which uses punk music and some modern fashion to emphasize the opulence of the era.

Kiera Knightley stars as English aristocrat Georgiana Cavendish of Duchess of Devonshire, whose scandalous life highlights just how poorly women could be treated despite supposedly being in power. And since she was born into the Spencer family, it's easy to notice the similarities in how she was treated as compared to her great-great-great-grand niece, Diana Spencer, Princess of Wales.

This drama starring Elle Fanning follows the young life of Mary Shelley, the author of Frankenstein or The Modern Prometheus. The film dives into her feminist upbringing and how her own experiences with grief, death, and maternity affected her story of an arrogant man who created a monster.

Another dive into literary feminists, this adaptation of the Charlotte Bronte novel stars Mia Wasikowska as the titular governess. Michael Fassbender plays her mysterious Rochester, with direction from Cary Fukunaga.

You've probably caught the movie adaptations of Price & Prejudice and Sense & Sensibility, but this lesser known Jane Austen story deserves your attention, too. Kate Beckinsale stars as Lady Susan, a quick-witted, smart, and expertly cunning noble woman who's on the prowl for a husband for herself as well as her daughter. The film is based on one of Austen's early stories, which wasn't published until after her death.

If you need even more of an Austen kick but have already seen every movie adaptation of her books, give this loose biopic a go. Anne Hathaway stars as the famous writer with James McAvoy as her potential suitor. Knowing her history, and that she never married herself, watching their courtship is a bit bittersweet, but learning how Austen lived and what events inspired her books makes this a key watch for any fan.

So anytime you're ready to drop out of 2018 for a few hours, these stylish, dramatic movies are waiting for you.