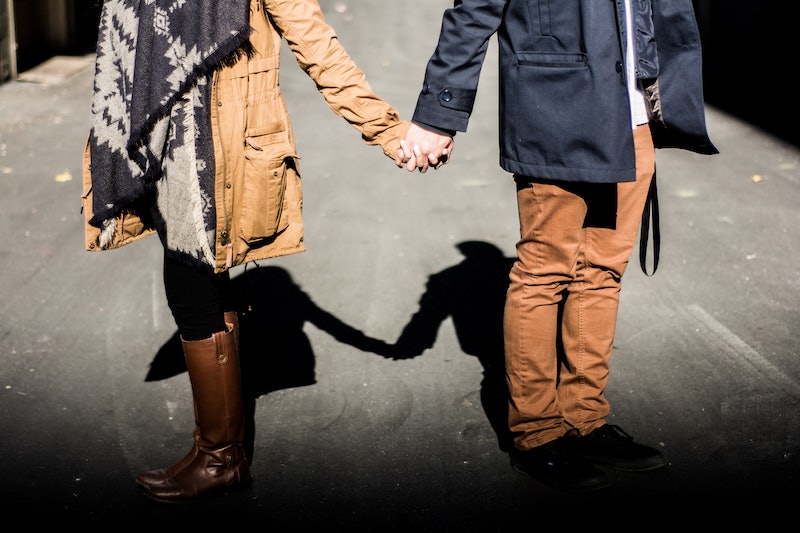 Toxic partners often give off a "bad" vibe that many people find attractive. They're kind of moody, kind of dark, and very cool in a lot of ways. But if you've always been attracted to toxic partners, you know none of that guarantees a happy, or healthy, relationship.

That's because, along with the excitement and intrigue, come many (many) undesirable traits. As psychologist Dr. Helen Odessky tells me, toxic people are often emotionally unavailable, manipulative, and untrustworthy. Sometimes they cheat, or refuse to commit, or throw all their baggage onto your life. These types of partnerships can, unsurprisingly, lead to anxiety, depression, stress — and often really bad breakups.

So, why is it that you keep getting stuck in this awful pattern? As Odessky says, "The excitement that this generates is grounded in familiarity, and we may find the intensity attractive at first. In the long run, [though], this wears us out ... because our emotional needs for trust and safety and acceptance are not met."

This is right around when you might start wondering "why you always do this to yourself," before it all starts up again. Sound familiar? Then read on for some more reasons why you're constantly attracted to toxic partners, as well as what to do about it.

1. You Aren't Ready To Commit

Everyone knows that "bad" boys and girls suck at committing. All they want to do is get into their Mustang and drive off into the sunset, which obviously feels awful when you're the one getting left behind. But have you ever stopped to think that was your plan all along? As advice columnist and breakup coach Chelsea Leigh Trescott tells me, you might find be attracted to toxic, uncommitted partners because you're not ready to commit either. Pretty interesting, right?

2. You Are All About Fixing People

People who need help aren't always toxic, but toxic people certainly always need a little help. If you're the "fixer" type, you might find yourself running to their rescue all the damn time. "For [someone] who suffers from rescuer syndrome or savior complex, nothing engages [their] heart more than a [person] who is toxic and could use some ... help," says Trescott. If this describes you, it may explain your string of very needy (and very toxic) partners.

On a sweeter note, you may be all about toxic partners because you're great at finding the good in people. Sure, they're rude. And yes, they're mean. But they're also so sweet and so talented. (Sound familiar?) As Michael Bruch, founder and CEO of the social app Willow tells me, a lot of good people are able to overlook warning signs or negative behaviors out of a desire to find the good in someone. A noble cause, but not one that's always entirely healthy.

4. You've Been Through A Bad Breakup

We've all been there: your relationship ends, your confidence is shaken, and suddenly you find yourself with a string of awful boyfriends or terrible girlfriends. As certified love coach James C. Green says, "I can almost promise you that in every one of those scenarios there was a past breakup that made these people feel like they don't deserve someone as good as they are." Sad face.

If you were exposed to a lot of toxicity growing up — in whatever capacity — you might unconsciously attract that same energy into your adult life. As author and behaviorist Robin H-C says, this is especially true for people who have been hurt but have yet to deal with their emotional history.

No one's ever accused toxic partners of being boring, so it's really no surprise people find them attractive. This is especially true if you've always been well-behaved and "good," life coach Hollie Chambers, MSW, tells me. Not only will you be charmed by your partner's spontaneity, but they may even motivate you try something new. And that can be hard to pass up.

7. You Have Low Self-Esteem

If you find toxic behavior acceptable, it may be due to a case of low self-esteem. That's because, as Trescott tells me, being with someone who is rude or mean doesn't make you feel much worse than you already do. While understandable, it's not something you have to put up with — especially if you can build your confidence back up.

8. You Fall For Their Coverups

Toxic people are really good at covering up their flaws. As dating expert Jill Bulluck tells me, they might try to compensate with really great clothes, or a sparkling personality. So really, it's not surprising you always find them attractive as that's kind of their goal.

9. You're All About That Chase

The chase aspect of a relationship is undoubtedly fun, but even more so when it means scoring someone who seems uncatchable. This is often the case with toxic partners, Trescott tells me, as they're so "exciting." And it even harkens back to that self-esteem issue. "By being with someone who is a '10,' or just out of your reach, you feel like for once you have proof that you’ve made it ... that you are more than you once were, that you are, in fact, enough." It may not be true, but it's a self-esteem boost that's hard to ignore.

If you've been dating toxic people for forever, it can start to feel normal, Bruch tells me. The dynamics become familiar, you learn how to deal, and before long you're in a pattern that you just can't break.

12. You're Addicted To The Drams

Drama can be addicting, both emotionally and physically. So don't be surprised if you feel "alive" when dating someone toxic, relationship expert Rhonda Milrad tells me. Once you get used to the drams, you might even feel like "normal" people are boring — thus leading you right back into the cycle.

13. You Attract Toxic People To You

Some people attract toxic partners like moths to a flame, which may explain why you can't get away from them. "Empaths, co-dependents, or people who are 'fixers' are certainly more susceptible to attracting someone who may have toxic qualities; such as narcissism," says psychotherapist Iman L. Khan, MS, LPC. Without even trying, your sweet and understanding self is reeling them on in, thus leading to one toxic situation after the next.

If this is your life, it is possible to break the cycle. For starters, look for a partner who isn't your "type," Odessky tells me — even if they seem too stable or "boring." If that doesn't work, seek out professional help. Talking about what you've been through in the past may help you have a better, and healthier, future.