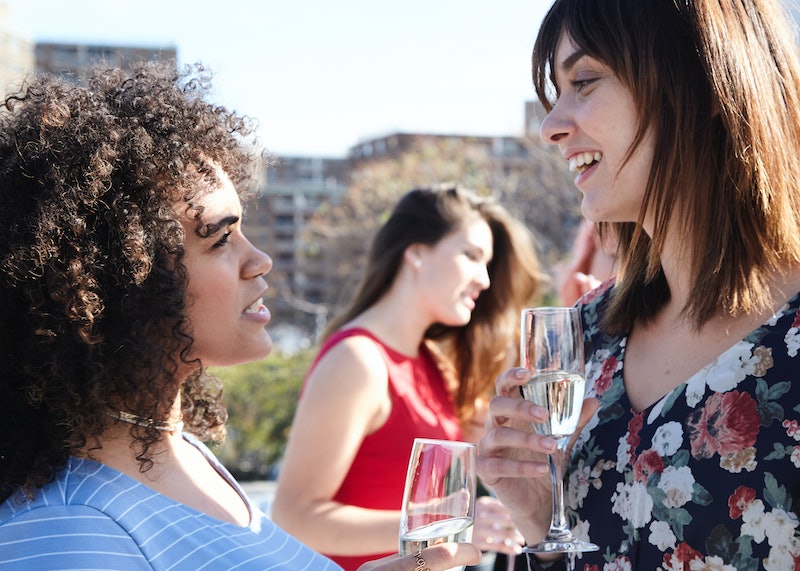 So many people get into a relationship thinking they can change their partner. Others believe major issues — like "red flag" personality flaws or bad habits — will magically go away with time. But, unforutnately, that's hardly ever true.

That's why, when it comes to dating, you shouldn't assume your partner can (or will) change. "Going into a relationship with any assumptions is a bad idea and could lead to massive disappointment and a breakup down the line," Kali Rogers, founder of Blush Online Life Coaching, tells Bustle. The best thing to do is assume your partner will remain the same forever, and then adopt a sort of "love 'em or leave 'em" mentality.

Of course, that's not to say you should run away at the first sign of a problem. And it certainly doesn't mean you can't adjust or work on issues together. "For instance, you might not be able to change the fact that your partner is late all the time, but you can change the anger surrounding that issue by letting go of your own agitation," Rogers says. Accepting your flawed partner is one option, as is deciding their issues are a total deal breaker. Read on for some habits and traits that will never change, and remember that the choice is up to you.

If your partner has a personality flaw — like narcissism or a lack of empathy — it's likely not going to go away. "You will never change personality traits because by definition they are unchangeable," says licensed clinical psychologist Joshua Klapow, PhD. You can, however, help your partner react differently in certain situations and change how they behave. This may require therapy, but if it's for your relationship, it's probably worth it.

2. That Thing That Happened In Their Past

If your partner has a sordid or troubled past that's affecting them currently — and thusly affecting you — it's important to figure out whether or not you can accept it. "You have no control over the events that have come to shape who they are," Klapow says. "All you can do is change how they experience life with you. So stop fighting against the past." Or go ahead and move on.

3. Whether They're An Introvert Or An Extrovert

If you're an extrovert, it might be tempting to drag your introverted SO out to parties in an effort to change their mind. But trust me — it won't make much of a difference. "If your partner is an introvert ... no insistence that the more is the merrier will change this essential part of his or her personality," says Sophia Dembling, author of Introverts in Love. So either embrace your differences, or — if it truly bothers you — date someone else.

Watching a partner struggle with mental illness is incredibly painful, and you might want to fix them, heal them, or urge them to "get over" it. But it's important to remember it just doesn't work that way. "You simply cannot 'fix' these issues on someone else's behalf," certified coach David Bennett tells Bustle. "While a loving and supporting partner can help a person with these issues, the issues are only treated and properly controlled with evidence-based treatment." And even then the problem can be lifelong.

It's totally possible to recover from an addiction and keep your symptoms in check. But there are so many instances of people relapsing that issues like these are definitely worth keeping in mind. "No amount of love, nagging, etc., will ultimately be a solution to this problem," Bennett says. "And, help can only happen if the person decides [for] himself or herself that treatment is needed and chooses to seek it."

If you've spent years forcing your partner to be less selfish, it may be time to give up. Because, again, no amount of begging can make a selfish person magically less self-centered. "If you are trying to get someone to be less selfish, that is a trait that will be near impossible to change," says relationship expert and matchmaker Susan Trombetti. "If a person is going to change something like that, they need to want to change themselves, not have you tell them to change."

7. Their Sense Of Humor

A compatible sense of humor is incredibly important in a relationship, so decide now if you're OK with the fact your partner can't crack a joke. "[Their] sense of humor will likely not change," says NYC-based therapist Kimberly Hershenson, LMSW. "If someone isn't funny by nature it is something that cannot be learned." Simple as that.

This one may seem like NBD, but lateness can become a huge issue between partners — especially if your concept of time truly doesn't match up. As psychic and spiritual counselor Davida Rappaport tells me, you can work on the issue together and give your partner ways to stay on schedule. But it may be one of the those that's never going to change.

Couples can learn how to fight and argue in a healthier way, so take note if your partner just doesn't want to put in the work to make things easier for you. It may be they've accepted that they have anger problems and are unwilling to change, or that they enjoy riling people up. If either seems to be the case, you might want to turn and run in the other direction.

10. A Tendency Towards Stubbornness

Stubbornness can be endearing at first, but it is a trait that can grow tiresome over the years. If you want to work on it, cool. "If you learn when to ease up and let them hold on to what they hold on to, things will be easier for both of you," Rappaport says. But if not, you may be setting yourself up for lifelong drama.

While there are plenty of great reasons to date someone who is passionate about their career, make sure you're OK with the degree of their passion early on. It is possible to find a balance, but as Rappport tells me, it's often impossible to change a workaholic's ways.

It's important, in the beginning of your relationship, to make sure you're both on the same page when it comes to certain values. While it's obviously possible to date someone who's different than you, some things are just too big to get past. As Dr. Fran Walfish, a Beverly Hills family and relationship psychotherapist tells me, their opinions on kids and money are likely here to stay.

13. A Complete Inability To Open Up

While your SO can totally work on their ability to be open and honest, this is yet another trait that tends to stick around for good — especially if it's extreme. "If someone is rigidly guarded and defensive they are likely to stay that way," Walfish says. It doesn't have to be a deal breaker, but since relationships tend to require a certain level of openness, it can create problems.

If your partner has any of these traits, you're going to have to either learn to live with it and love them anyway, or move on. Because they're definitely not going to change.

More like this
The 19 Best Tweets & Memes About Bisexual Awareness Week
By Lexi Inks
10 Ways To Be More Empathetic To Your Partner
By Raven Ishak and Lexi Inks
Think Your Partner Is Cheating? These Tarot Cards May Confirm Your Suspicions
By Kristine Fellizar
Why A Libra & Libra Couple Might Become Codependent
By Kristine Fellizar
Get Even More From Bustle — Sign Up For The Newsletter