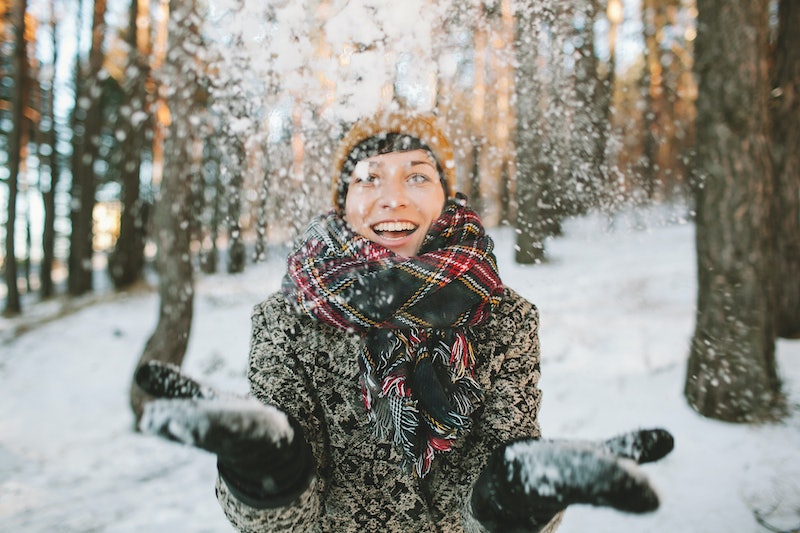 There's nothing like anticipating a snow day. While growing up in upstate New York, I bought into tons of superstitions that were purported to encourage snowfall, all in hopes I'd wake up to a thick white blanket of fresh snow outside my window. From wearing your pajamas inside out to sleeping with a spoon under your pillow, the ideas were endless. While as an adult, enjoying a snow day no longer means skipping a day of school, that doesn't make it any less amazing or beautiful. Personally, one of the first things I always move to do is post a snow day picture on Instagram — but I find I keep running into the same issue: what snow day quote do I use as an Instagram caption?

Unlike when we were younger, it's now unthinkably easy to share snaps from your snow day with your friends — you just post something on Instagram. Settling on a caption can be the toughest part of posting a photo, though, so to ensure you don't fall into the habit of just using the snowflake emoji again, read on for the best snow day captions that embrace the magic of winter.

1. "Despite all I have seen and experienced, I still get the same simple thrill out of glimpsing a tiny patch of snow in a high mountain gully and feel the same urge to climb toward it." - Edmund Hillary

3. "There's just something beautiful about walking in snow that nobody else has walked on. It makes you believe you're special." - Carol Rifka Brunt

4. "What good is the warmth of summer, without the cold of winter to give it sweetness." - John Steinbeck

7. "A snow day literally and figuratively falls from the sky - unbidden - and seems like a thing of wonder." - Susan Orlean

10. "In the depth of winter, I finally learned that there was in me an invincible summer." - Albert Camus

11. "When it snows, you have two choices: shovel or make snow angels." - Unknown

12. "To appreciate the beauty of a snowflake it is necessary to stand out in the cold." - Aristotle

13. "The Eskimos had 52 names for snow because it was important to them: there ought to be as many for love." - Margaret Atwood

14. "Advice is like the snow. The softer it falls, the longer it dwells upon and the deeper it sinks into the mind." - Samuel Taylor Coleridge

15. "Thank goodness for the first snow, it was a reminder--no matter how old you became and how much you'd seen, things could still be new if you were willing to believe they still mattered." - Candace Bushnell

20. "In the depth of winter, I finally learned that within me there lay an invincible summer." - Albert Camus

So, what are you waiting for? Grab your hat and go roll around in the snow a bit, taking some snaps along the way. Then come back to warm up with a nice cup of hot cocoa and get posting.