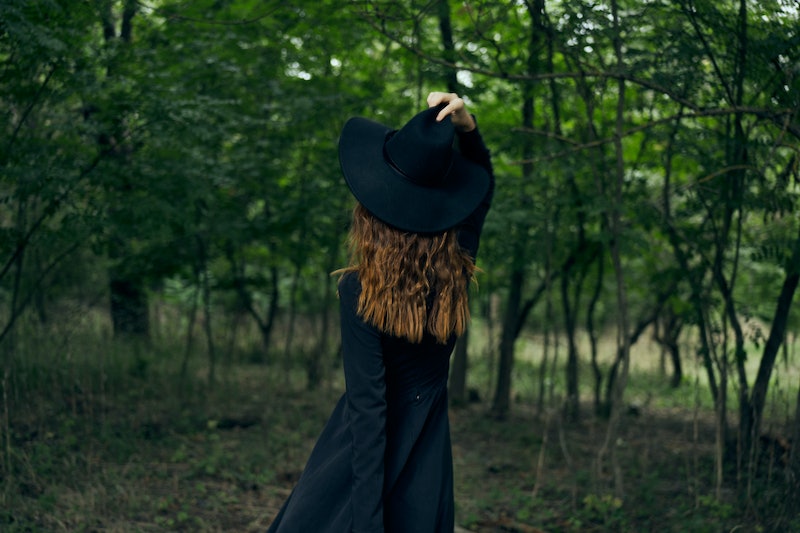 Goblins and gremlins and ghosts, oh my! Halloween is lurking just around the corner, folks, but you probably already knew that. What's perhaps more terrifying is the fact that Mercury retrograde fall 2019 is also lurking just around the corner, as it begins on the very same day as Halloween and takes place in the intense, emotional, secretive sign of Scorpio — making this quite possibly the scariest day of 2019.

Mercury retrograde periods tend to wreak a bit of havoc in our lives. It's the planet of communication, timing, and intellect, so during a retrograde, the energy will slow us down and make those areas of our lives run much less smoothly. It can be so stressful, in fact, that I've been asking myself whether I should even go out or stay in this Halloween. Like, seriously: It's Halloween, it's Samhain (the Pagan sabat that coincides with Halloween), and it's the kickoff to a Scorpio-ruled Mercury retrograde? Sh*t's intense.

But exactly how spook-tastic will this Halloween Mercury retrograde be? Well, Halloween is also the date of the previously-mentioned Pagan holiday known as Samhain, during which it's believed that the "veil" between the world of the living and then dead is at its thinnest — making it easier to commune with the other side and connect with spirits who have passed on. Bustle spoke with astrologer Lisa Stardust, who confirmed our spookiest speculations: "Mercury will start it’s retrograde journey on Halloween, which will allow us to see existence through a different lens — this includes spirits," she shares. Ooooh. In addition, Scorpio (the zodiac sign in which both the sun and retrograding Mercury will be come Halloween) is known as one of the most occult-oriented and spiritual of all the signs, so the energy of transformation, death, and rebirth is strong.

Stardust also gives us the spooky, spectral scoop on Halloween's other most mystical astrological happenings. "The Moon will be in Sagittarius, which will make us all have a higher awareness of paranormal activity," she explains. "With Neptune squaring the Moon, our abilities to connect with the other realm will be higher." That all said, this Halloween season might bring upon some other-worldly sightings of the paranormal kind.

Not to really freak you out or anything, but yes, there are a few zodiac signs most likely to see ghosts when Mercury retrograde begins on Halloween. And if you're one of them, you may want to prepare for a mystical experience.

This is your season, Scorpio, and there's a lot happening in your sign as Mercury retrograde hits on Halloween. Always drawn to the occult and the extreme mysteries of our existence, you may find yourself feeling more sensitive to the invisible forces among us. "Your senses will be heightened which will give you the ability to see ghosts," shares Stardust. Allow this sort of extra sensory perception to be taken as a blessing, not a curse. The mysterious universe presents a piece of a puzzle to you yet again.

When Mercury begins its backspin this Halloween, the shadowy and emotional moon will be in your sign, and you'll be feeling extra sensitive and perceptive to the spiritual forces all around you. "You’re now connected to the spiritual plane," explains Stardust. But a note of advice: Don't open yourself up to just anything, because the veil is thinned and you never know what sort of energy is lurking around. "Be careful and protect your energy," warns Stardust. Grab a black tourmaline crystal or a do a Mercury retrograde protection ritual.

Always practical, reasonable, and grounded, you're not the usual suspect when it comes to ghost sightings or paranormal obsessions. That said, once Mercury retrograde begins on Halloween, you may find yourself in a slightly more spiritual place, noticing sensations and even visions you've not felt before. "You may be able to hold discussions with ghosts and communicate with them on a friendly level," explains Stardust. Allow your mind to open to such possibilities, and you might be amazed and what you discover.

You rarely ever let yourself fall too out of touch with your deep, strong sense of other-worldly intuition and psychic sensibility. And with both the sun and retrograding Mercury in a fellow spiritually-minded water sign, you're veil-crossing powers will be at a high and you'll likely be in touch with unseen forces. "You’re psychic abilities will be on point, which could lead to an existential debate with a ghost," says Stardust. Trust your instincts and allow lessons from the other side spark new ideas in your creative mind. This Halloween will be mystical.