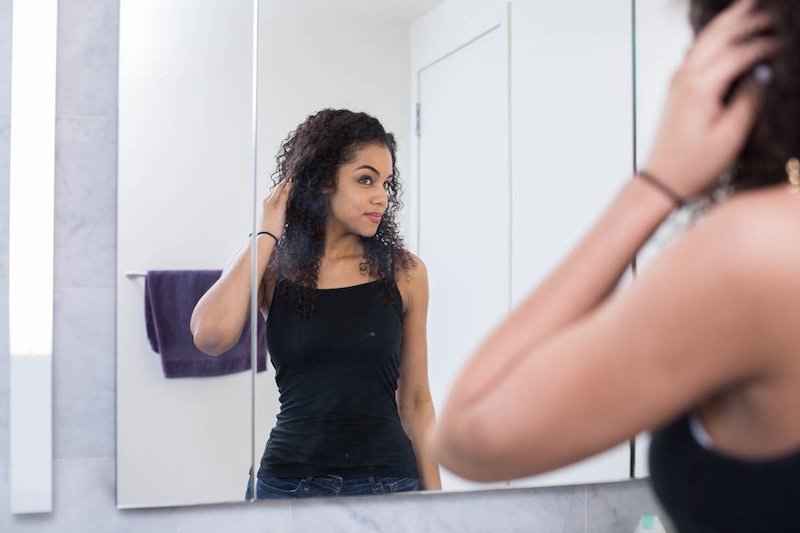 It's never a bad idea to stay away from people who exhibit dark personality traits, as psychologists call them, such as narcissism, psychopathy, Machiavellianism, or sadism. But interestingly enough, research has found that people who may exhibit certain dark traits tend to be seen as more physically attractive. It's not that people find sociopathic tendencies in themselves attractive. But seemingly irresistible personality traits can have a much darker side to them.

"Often the qualities we find most attractive in another person also have a shadow side," Deborah J. Cohan, Ph.D., associate professor of sociology at the University of South Carolina-Beaufort, tells Bustle. These are seemingly desirable qualities, which over time, can reveal personality traits that may actually be negative, and potentially toxic. These traits may even raise some major red flags that the person you're dealing with is a "dark personality."

But being careful and staying away from someone who has darker traits is much easier said than done. As clinical psychologist, Dr. Lori Whatley, tells Bustle, "We tend to be drawn to these type of people because opposites do attract and we are attracted to our shadow self." It may explain why some people with low self-esteem tend to attract and stay in unhealthy relationships with people who exhibit narcissistic personality traits.

It's important to pay close attention to the people who are genuinely interested in you, and distinguish them from the ones who are just interested in meeting their own needs. So here are some darker personality traits that are often mistaken for attractive qualities, acording to experts.