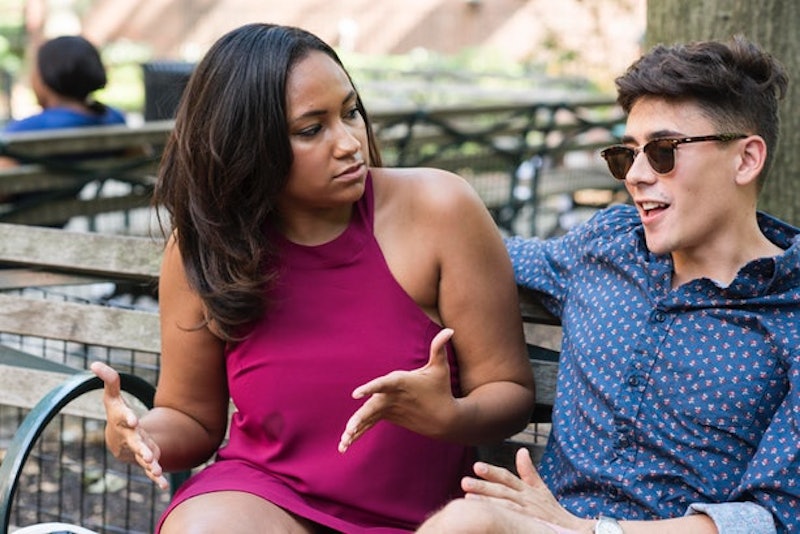 While you may not like to argue with your significant other, it probably happens sometimes. You may know couples who argue often and those who don’t. But there are several reasons why arguing may be good for your relationship. In fact, an online study, “Able Arguers,” among 976 individuals in 2012 found that couples who engage in healthy conflict are 10 times more likely to have a happy relationship versus those who ignore difficult conversations. The study was conducted by David Maxfield and Joseph Grenny. Grenny co-authored The New York Times bestseller Crucial Conversations: Tools for Talking When Stakes are High, and Maxfield co-authored follow-up books in the series, all of which were also NYT bestsellers.

“It’s not so much that arguing is good — it’s that disagreements are inevitable,” Maxfield tells Bustle. “Ignoring the disagreements doesn’t work, and turning disagreements into fights doesn’t either. The key to a successful relationship is how you handle the inevitable disagreements. Those who handle them with honesty, frankness, respect, and love are far more successful than those who don’t.” Makes sense, right? Though it may be easier said — or argued — than done.

So you may be wondering how and why arguing is good for your relationship, and below, several experts weigh in.

More like this
Is It A Rebound Relationship Or The Real Thing?
By Carolyn Steber and Lexi Inks
The Best Time To Date After A Breakup, According To Experts
By Bustle Editors
Are Quality Time & Physical Touch Love Languages Compatible?
By Lexi Inks
20 Things You Should Never Tolerate In A Relationship
By Rachel Sanoff and Kathleen Ferraro
Get Even More From Bustle — Sign Up For The Newsletter