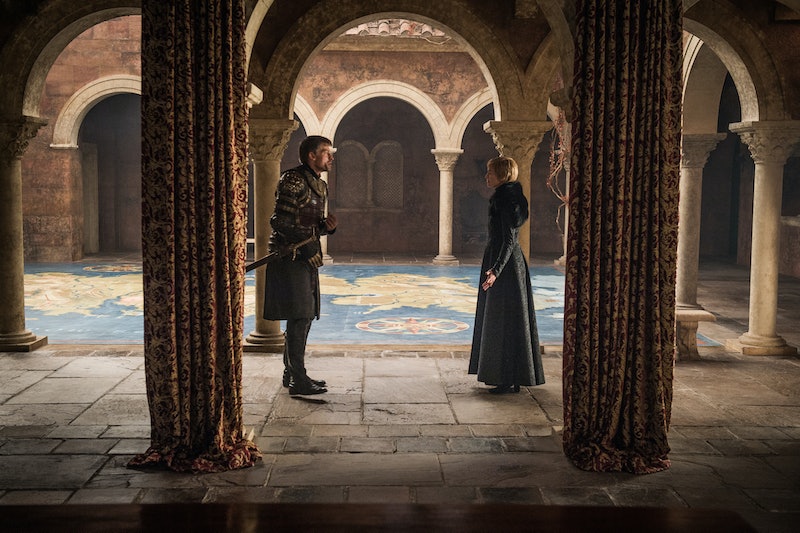 Spoilers ahead for Game Of Thrones Season 8. Although he despises the name, Jaime Lannister is known throughout Westeros as the Kingslayer (or "King Killer," if you're Tormund). And as Game of Thrones comes to an end, it seems more certain than ever that Jaime could become a Queenslayer too. Theories about how Jaime will kill Cersei on Game of Thrones are worth considering since Jaime left Winterfell in "The Last of the Starks." There's debate within the fandom whether or not Jaime is going to King's Landing to defend or fight Cersei. But with Jaime's last words to Brienne being how he's "hateful" like Cersei, it seems like he has murder on his mind.

In George R. R. Martin's books, there's a valonqar prophecy that says that Cersei's younger brother will kill her. This hasn't been explicitly part of the HBO series, but it still seems like the TV show may go in that direction. And while Tyrion wouldn't mind killing his older sister, it seems more poetic if Jaime does it. He has evolved so much over the course of the show and is finally living according to his own moral code instead of Cersei's twisted family values. Even Nikolaj Coster-Waldau said that Jaime killing Cersei "makes sense" during an appearance on Jimmy Kimmel Live! Sure, that might be the biggest sign that this won't happen, but don't tell that to the proponents of any of these theories on how Jaime could kill Cersei ... if Arya doesn't get to her first.