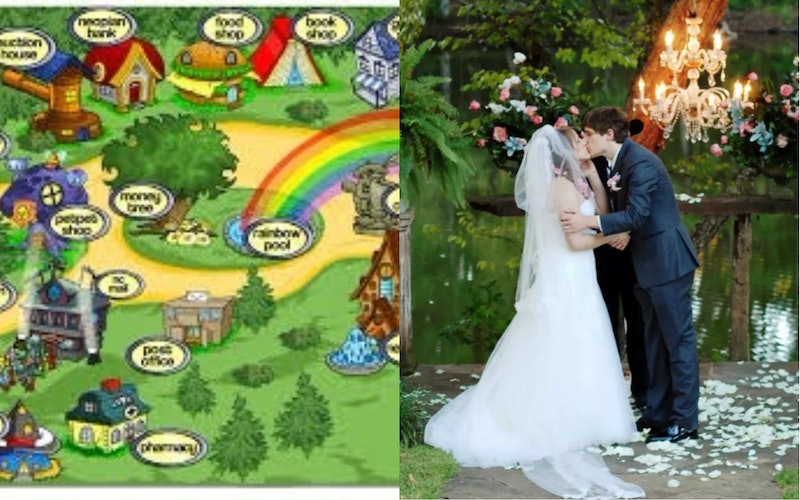 For anyone who’s ever questioned whether you can actually make real, meaningful relationships online, here’s a story that answers that conundrum with a clear, emphatic, "Yes": Kristin and Michael Andrews-Karr are a married couple who met playing Neopets when they were kids. Not only did their participation in a Neopets guild help them build a solid friendship they later took first off the site and later into real life, it also helped them build the kind of relationship that means you’re partners for life. Kristin recently told the couple’s story to BuzzFeed News, and naturally, it’s now going viral: Not only is it adorable, but it’s also a testament to the value of online friendships.

Originally launched in late 1999, Neopets is a website and online community centered around the raising of and caring for brightly-colored imaginary creatures — the titular Neopets. (I mean, if you’re reading this, you probably already know all this; if you are a millennial of a certain age, odds are you spent at least a brief amount of time deep into Neopets yourself.) Somewhat astonishingly, the site has been around for nearly 20 years now; it’s changed hands a few times during those two decades, most recently having been purchased by educational media company JumpStart in 2014, but it’s still alive and well. (JumpStart was later purchased by app and MMO developer NetDragon Websoft in 2017.)

Undoubtedly, though, Neopets' height was during its early years at the beginning of the 2000s — which is when both Kristin and Michael Andrews-Karr joined the site. Kristin was 12 at the time, while Michael was 10. They lived in different places in the real world — Kristin was in Little Rock, where the couple now live, while Michael was in Ohio — but they hung out in the same space online: A Neopets guild called the Evil Jellies. The guild allowed users to role-play as either “good guys” or “bad guys,” with the drama and storylines playing out through chatrooms and over the “NeoMail” messaging system. Kristin, who played under the handle Zepher_Cat, was a “good guy,” while Michael, who played as “Doctor,” was a “bad guy.”

Despite the fictional guild rivalry, however, many of the members grew close — and Kristin and Michael developed what would later prove to be a lasting relationship. As they got older, they started communicating over AIM (RIP, faithful friend), and their conversations moved from guild-related chats to sharing things about their everyday lives. As teenagers, they exchanged their real names and photos, and eventually began speaking on the phone.

The phone calls had to carried out in secret; although Kristin’s parents new about her friendship with Michael, she told BuzzFeed News that he kept it on the down-low. Said Kristin, “He was afraid that if he told his parents about me, they would tell him he can’t talk to strangers online.” (And, I mean, if they had, that would have been fair; this particular story ended in the best possible way, but online safety is no joke, especially for kids.)

But they continued chatting and talking — and when they were in high school, they started saying “I love you” whenever one of them signed off. Kristin, who by that point had developed romantic feelings for Michael, was the one who took the next step: She asked him, “Do you really mean that about me?” The answer was yes, and the two began long-distance dating.

When Michael was 17, he applied for and was accepted to Hendrix College, a liberal arts college near Little Rock, putting himself and Kristin in the same city for the first time. They had their first real-life meeting at a restaurant in the area (Kristin wisely brought her mother with her), and the sparks were as bright in person as they had been online. They continued dating — and in 2014, they got engaged. They married not too long after that, and, well… the rest as they say, is lovely, romantic history.

Never let it be said that online relationships aren’t real. They absolutely are, and they can result in wonderful, wonderful things.

What’s clear from stories like Kristin and Michael’s is that the internet has changed how we make, development, and maintain relationships with other people, whether we’re talking about friendships or romantic relationships. While it’s true that some researchers don’t think it’s possible to build “real” relationships out of online ones — according to a 2007 study out of Sheffield Hallam University, for instance, online communities and social networks allow people to have contact with hundreds of “friends” only about five of those “friends” are considered actual friends — plenty of other research shows that online relationships matter just as much to many people as offline ones do.

For example, a 2017 study out of the University of California, Irvine found that, although parents often worry that teenagers spend too much time online and not enough time offline, the digital behaviors in which many teens engage “serve the same purpose and encompass the same core qualities as face-to-face relationships,” according to Science Daily. What’s more, Pew Research Center data from 2015 shows that many teens prefer to make friends online, rather than offline. (Typically, they do so through social media and online gameplay — and given that Neopets is sort of a combination of those two means of connection... well, you do the math.) And, as writer Jazmine Hughes put it in a piece published by the New York Times in 2015:

“The web provides a space where the normal barriers to friendship — namely, the confusion about the appropriate way to start one — don’t apply. Online, you can choose to opt in — friend, follow, favorite — any person that [piques] your interest, because of your pre-existing knowledge, again gleaned from the internet of their interests. The web doesn’t preclude people from making IRL friends. It actually makes it easier.”

Indeed, what even the studies which say you can’t make friends online do support is that being able to meet in person will definitely help strengthen a relationship — whether you originally met online or offline. In the Sheffield Hallam University study, the participants had met fully 90 percent of the contacts they thought of as close friends in real life. Said study author Dr. Will Reader to The Guardian, “People see face-to-face contact as being absolutely imperative in forming close friendships.” He added, “What social network sites can do is decrease the cost of maintaining and forming these social networks because we can post information to multiple people.”

As Kristin and Michael’s story demonstrates — and as do the countless friendships and relationships that so many others have, as well (including yours truly — I met the fella I eventually married online) — you absolutely can make important and lasting connections with others on the internet. That’s what’s so great about it: It puts literally an entire world’s worth of potential friends at your fingertips.

More like this
13 Selfie Instagram Caption Ideas That Exude Main Character Energy
By Jessica Booth and Emma Carey
What Does POV Mean On TikTok? The Popular Acronym, Explained
By Emma Carey
Here’s How To Get Verified On TikTok
By Emma Carey
22 Movies On Netflix That Are Perfect For The Whole Family
By Bustle Editors
Get Even More From Bustle — Sign Up For The Newsletter