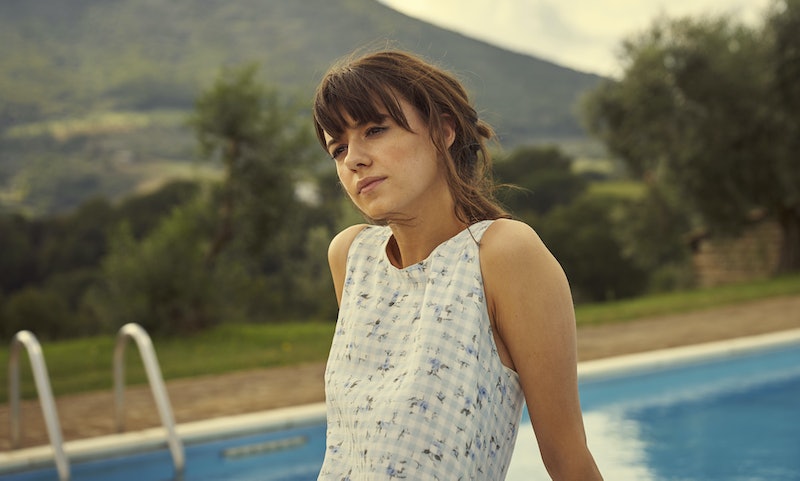 Normal People has been the lockdown gift that keeps on giving. Be it the beautifully intimate scenes between the two lead characters, the stylish wardrobe choices, or Paul Mescal just... existing, there's been plenty to unpack. And if, like me, you're into beauty, you'll no doubt have been eyeing up the hair and make up choices too, with one look in particular catching your attention. Yup, you guessed it: Marianne's fringe.

As we've all figured out by now, although Paul Mescal and Daisy Edgar-Jones were fabulous, the real stars of Normal People were the inanimate objects. Namely Connell's chain (click here for Bustle's deep dive) and Marianne's fringe.

The hairstyle rocked by Edgar-Jones has accrued thousands of fans, many of whom have been sharing their thoughts on Twitter. On May 7, British Vogue wrote a piece entitled "5 Times Marianne's Fringe Stole The Show In 'Normal People.'"

While I totally understand the obsession with Marianne's fringe, I still want to know more. What is it about this fringe in particular – as opposed to, say, Jessica Day's or Nadia's from Russian Doll – that has had us all losing our minds? Is it just that we've all been cooped up too long, denied the right to a decent haircut, or is there more to it than that?

I turned to the experts for answers.

For starters, Marianne's fringe has struck such a chord with Normal People viewers because the style is bang on trend right now.

"This year, it’s about a straight fringe that has softness around the sides but sits above eyebrow length and is cut into," says legendary stylist Paul Edmonds, which is exactly what we see on Edgar-Jones.

Craig Taylor, the creative director at London-based salon HARI's, calls this style "inverted" or "arc-shaped (longer edges, with a shorter centre)." He says Marianne has "a slight shattering of the fringe," which breaks "the outline and stops a hard perfect line, which also opens the face a little." Edmonds describe it as "a modern Bardot look."

Along with the fringe itself, the cut that comes along with it is just as important. The two have to complement one another or the whole thing just will not work.

As Craig Taylor, the creative director at London-based salon HARI's, explains, Marianne's fringe is at its best when accompanied by an "on-trend shag cut" at collarbone length, which is the style she begins to rock during her university days.

However, Taylor also points out that the fringe works when Mariane's hair is "pulled back at the sides with the back down" or "tied up in a relaxed up-do showing off the fringe" because all of these styles from her face perfectly. Which brings us to...

3. The face it's framing

As Taylor explains, now matter what fringe or hairstyle you go for, it all comes to how well suited your face is for this kind of look. Every woman of a certain age will know that fringes just aren't for everyone (with many of us learning that the hard way...), but Edgar-Jones can definitely pull it off.

"Daisy has an oval shaped face, which is perfect for a fringe, as it gives great balance for her face shape," Taylor explains. "The shorter centre with longer taped sides is face framing and opens up her face and eyes, and pronounces her cheekbones."

In Normal People, we see a lot of close ups on Edgar-Jones, meaning we really get a chance to appreciate all the features that her fringe helps highlight.

Along with oval shaped, fringes also suit those with "rectangle, heart or oblong shaped faces," says Taylor. "Face shapes that would be less likely to suit this look would be short square, wide faces or a narrow forehead. This look would foreshorten the face further or make a wide face wider."

So, should you got for it?

If you fancy having a Marianne fringe of your own, be warned: lockdown is not the time to do it. I mean, unless you live with a hairstylist. Taylor encourages people to wait until they can have the bangs cut in professionally, as this is a very delicate process.

And what about maintaining the style? Well, Edmonds says that, in order to keep a Marianne-style fringe in tip top condition, you'll need to go for regular trims, which is another reason to put this off until hair salons re-open.

When it comes to styling, he explains that dry shampoos are your new BFF. "They can keep the fringe staying styled for longer and looking fresh," he says. And when you do wash it, this is how he recommends drying it to get the perfect finish:

"Round brushes are good if you want to lift the root but don’t overdo it with a straight done fringe; you want texture. A good tip is to just use your fingers and a hairdryer; fluff the hair whilst blow drying it to keep it broken up and create texture."

Now all we need to do is patiently await the re-opening of our go-to salons!