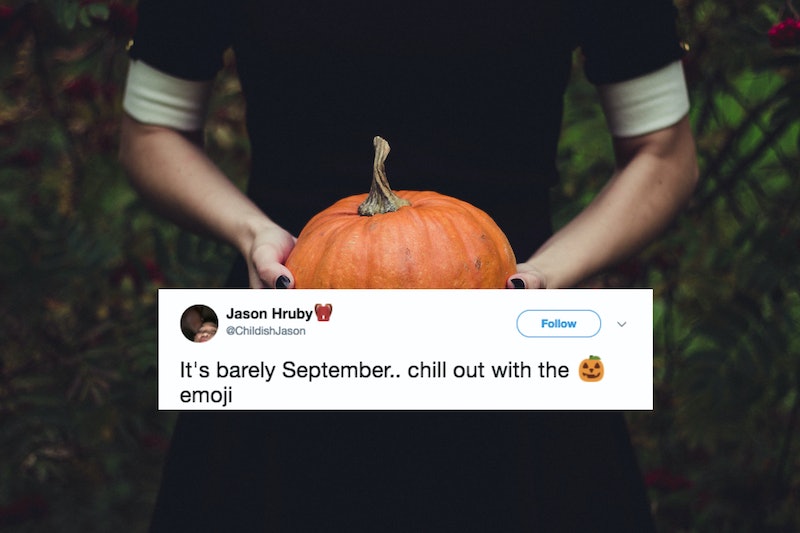 There is no seasonal war waged quite like the one in the early weeks of September, when the summer babes go toe-to-toe with the autumn lovers and wrestle over what season we're actually in. While the weather starts to get a little colder, it is, technically speaking, still summer; but in the spooky hearts of fall stans, summer can't come to the phone right now ("Why? Oh — because summer's dead"). No place has that struggle played out more effectively than on this man's tweet asking people to stop using the pumpkin emoji, and this woman's epic clap back that will surely be echoing into next fall and perhaps into the autumns of many generations of PSL-slurping humans to come.

Twitter user @ChildishJason tweeted on Sept. 3, "It's barely September ... chill out with the [pumpkin] emoji." And while he and the other summer holdouts are certainly entitled to their seasonal opinions, Jason and the rest of Twitter found out pretty quickly that the pumpkin emoji isn't just an emoji; it's a way of life. And more importantly, it was a siren call for all the saltiest friends of autumn to hop into his mentions and quote retweet him with — you guessed it — a plethora of pumpkin emoji.

To be fair, some of the judgment here is justified — and honestly, I blame Unicode. The thing is, the pumpkin is by far the largest defining icon of fall. Only problem? We don't have a regular pumpkin emoji. We just have the one Jack-O-Lantern emoji, which conveys a much spookier, aggressive version of fall than those of us early tastemakers are probably trying to convey.

Could we just add leaf or cloud emoji to get our point across? Sure. But this is the season to embrace your inner basic, and we are as determined as ever to stick to our spooky guns. Enter this autumn hero, Twitter user @vixterminator, who dragged all of the summer hangers-on using nothing but the pumpkin emoji.

Because quote retweets format weirdly on Twitter embeds, here's a screenshot for context:

Apparently people have THOUGHTS about this particular seasonal transition. The thread has inspired dozens of replies both from supporters and from pumpkin emoji fans since; unsurprisingly, this GIF was featured heavily throughout the comments.

One user took a page from the epic "NO" clapback and proceeded, in a series of tweets, to spell out the words, "F * C K Y O U" in pumpkin emoji — but somehow wasn't the person who escalated it the furthest. For that, my friends, look no further than what is arguably the saltiest response of them all.

Granted, it does seem like fall is getting pushed earlier and earlier with each passing year. Starbucks, for instance, has already released its famous Pumpkin Spice Latte for the fall, after streaming the "hatching" of the drink on Facebook Live for the first few days of September. Bath and Body Works has started releasing fall-inspired items, and Lush went full on Halloween with theirs. The viral rosé forty, aka the drink of the summer, has been swiftly replaced by its goth cousin, the red wine forty. It seems like no matter where you go, there's autumnal cheer in the air, the actual Gregorian calendar's definition of autumn be damned.

For what it's worth, Twitter user @ChildishJason has a point — we still have 15 days left of summer. So if you're one of the holdouts, finish up those last frosés on the patio of your local restaurant and pour one out for all of the eclipse and Taylor Swift memes of summer 2017 yore. Because like it or not, the pumpkin emoji are coming. They're coming for us all.