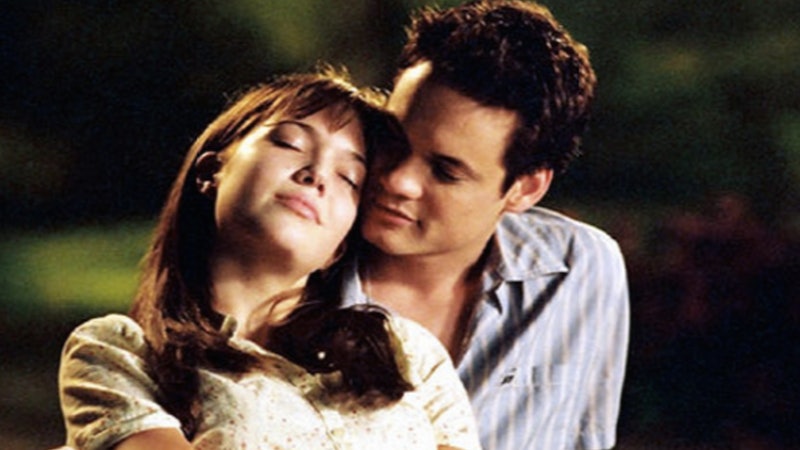 It's natural to want to cry when you find out that one of your favorite movies or television shows is leaving a streaming service, and you won't be able to stem the tears when you watch this one for the last time. Although, to be fair, it's hard not to cry any time you relive A Walk to Remember, the one movie you need to watch before it leaves Hulu in April.

For those who didn't watch the early aughts tearjerker religiously when it first came out, A Walk to Remember centers on Landon Carter (Shane West), a rebellious teenager who, after getting in trouble with law enforcement, starts growing closer to Jamie (Mandy Moore, at the height of her bubblegum pop career), a shy, pastor's daughter.

Though she makes him promise not to fall in love with her, Landon and Jamie begin a relationship, and she eventually reveals that she has terminal cancer. In an attempt to help her enjoy the time she has left, Landon and Jamie embark on a quest to complete her bucket list. And if you need tissues just reading that summary, well, you're not alone — after all, Moore's performance has been making audiences cry for decades now.

Though A Walk to Remember came out over 15 years ago, Jamie and Landon's love story remains one of the most iconic teenage romances of the early 2000s. Though, the film's long-lasting success has even surprised Moore herself. "That movie has touched people and still continues to in a way that we never, ever expected. I'm totally flattered, Moore told Jimmy Fallon during an appearance on The Tonight Show Starring Jimmy Fallon back in September. "I'm slightly flabbergasted that the sort of things in my career that I'm most known for is making people cry. I never would have guessed that in a million years."

Part of the reason that fans fell in love with the film so intensely is the chemistry between Moore and West, everyone's dream bad-boy boyfriend in 2002. In fact, their chemistry was so real, Moore later confessed to actually falling a little bit in love with her heartthrob costar during filming. "Shane was so cool. Everything about him — the way he dressed, the little cigarettes that he smoked, and the music he listened to," Moore told Entertainment Weekly in 2017 about meeting West for the first time.

"He was the character to me and there was definitely a part of me that absolutely fell in love with him," she continued. "I don't know if I could discern the difference between him and the character at that point in time because, again, it was my first experience doing anything like this and I was a 16-year-old, impressionable girl." (We know exactly how you felt, Mandy.)

And though he didn't say he had a crush on Moore, West has made it clear that the affection was mutual: "It was kind of perfect the way we came into the project," West told EW, "because she was coming from this pop background at that time — she had her song 'Candy,' and a role in the Princess Diaries — and for me I was into punk rock and so it was like completely opposites attract, or opposites are forced together to work. It was great for the role because that’s how the characters are put together in the movie."

In fact, West thought they were so perfect together that he claimed he considered quitting the project if Moore didn't get the part of Jamie. "It just didn’t feel right. The person just didn’t seem right," West explained. "When they brought up Mandy, I was like 'I don’t know Mandy.' Then we had that meeting where we had an audition and were both in the same room and I was like, 'She’s perfect for the role.'"

While Jamie and Landon's romance might be short-lived on Hulu, fans can always hold out hope for West to make a guest appearance on This Is Us, which he recently confessed he'd be open to. "Look, I feel like... it would have to be the right way to do it," West told Entertainment Tonight about potentially reuniting with Moore on the small screen in February. "I'm 100 percent interested, we've talked about it that we'd be interested [in an appearance]. You'd want it to be something special. Not just a pop in. Something that goes somewhere."

Right now, fans can still experience the magic that is Jamie and Landon falling in love in A Walk To Remember by streaming the film on Hulu. But come April 30, the movie will disappear from the site, and then, fans will no longer have the chance to grab a box of tissues, a pint of ice cream, and treat themselves once more to a heartbreaking, early-aughts-soundtracked love story for the ages. In other words, your "Only Hope" is to watch A Walk To Remember now, before it leaves Hulu for good.