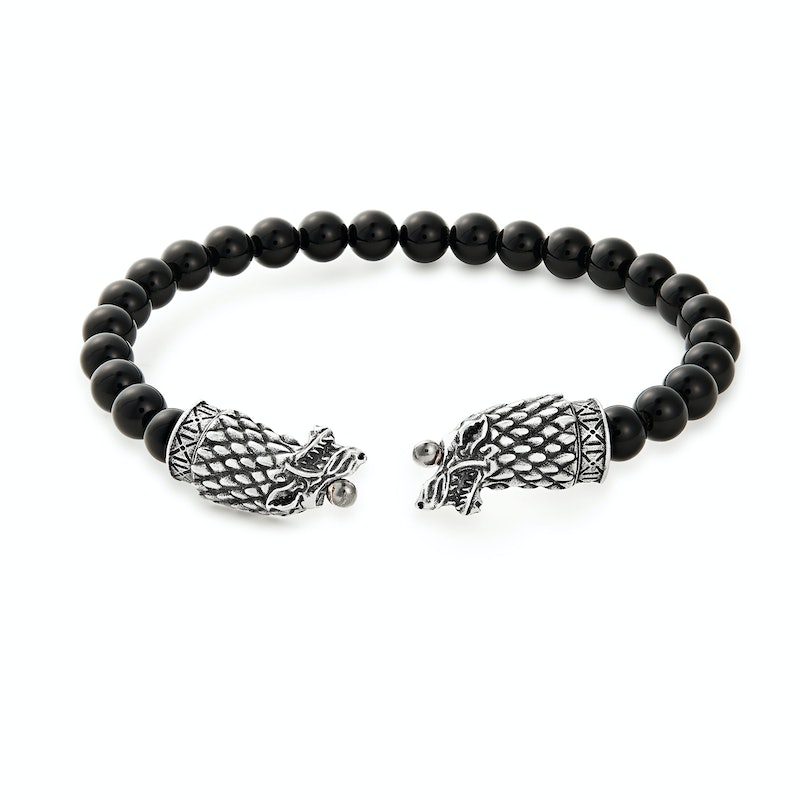 In case you haven't heard (which seems unlikely), Game of Thrones is returning on April 14. Whether you're planning a huge viewing party or binge watching the show in advance, the hype is real. Now, you can wear your hype thanks to Alex and Ani's Game of Thrones collection. The Westeros themed jewelry won't just have you looking and feeling like a Khalessi, but they'll help you show your support for who you'd like to see end up on the coveted Iron Throne.

On April 11, just in time for the weekend premiere, Alex and Ani launched their new Game of Thrones collection. The 18-piece, television show-themed jewelry collaboration features everything from necklaces to bracelets to rings all created with the different houses of Westeros and fans' favorite characters in mind. Whether you love Arya Stark or want to see Daenerys Targaryen take the Iron Throne, there's a piece in the new collection for you.

As for the prices, the new jewelry won't break the bank. Everything in the Alex and Ani Game of Thrones collection retails for between $39-$59, and you can start shopping some of the pieces right now on the brand's website. 14 of the 18 pieces are up for grabs, but if you want a Thrones-themed ring, they'll become available later this month.

The new collection doesn't just include the sigils of houses like Lannister, Targaryen, and Stark. The brand has also curated jewelry meant to represent fan favorite characters.

The Arya Stark necklace features a specially chosen Blue Lace Agate stone which is meant to encourage you to "speak your truth" according to the brand. On either side of the stone, fans will find recognizable symbols like the House Stark wolf sigil and a shield to represent the House of Black and White where she trained.

If you're not so much a necklace person as a bracelet lover, Daenerys Targaryen's charm bracelet features the same sort of careful charms chosen to represent her. Of course, there's the dragon head and dragon egg because she is the Mother of Dragons, after all. As for the arrow, it's dragonglass, the substance found at Dragonstone and used to defeat White Walkers.

If, however, you don't have a favorite character but simply a favorite house. Alex and Ani also has you covered. They've created items to represent some of the show's most popular houses including these House Lannister sigil earrings.

Of course, Alex and Ani aren't the only brand that's getting in on the Game of Thrones premiere excitement. If you're more of a beauty person than a fashion person, there are ways to show your Game of Thrones love, too.

No matter how you choose to show your love for Game of Thrones, clearly, brands want to help you do so. If you want to bling like a Khalessi, Alex and Ani's Game of Thrones collection is for you.