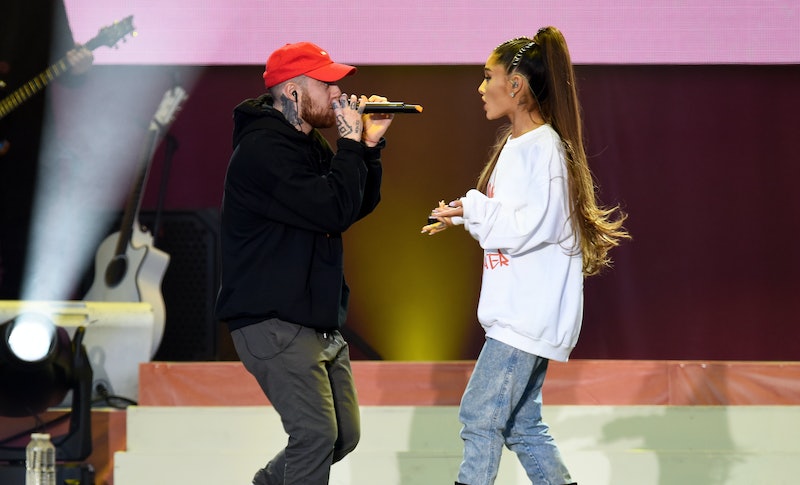 There's so much to unpack from Ariana Grande's latest album that dropped on Friday. Of course, everyone is impressed with her vocals. Aside from that, the fascination with her personal life seems to be at an all-time high. If anyone wants to analyze lyrics about her dating history, there are quite a few Mac Miller references on Grande's Thank U, Next album that acknowledge her late ex.

As fans know, Grande has gone through some tough times in the past couple of years, and she's been vocal about channeling her feelings into music. In October 2018, a fan tweeted the singer about being "the hardest working woman in the industry." In response, Grande explained,

"it ain’t work when u love it r u kiddin ! i’m the luckiest girl in the world to be able to do this shit n express myself n heal this way .... my lifeline tbh thank U for listening n allowing this to be my life."

To quickly recap, Miller and Grande were frequent collaborators — notably, they recorded the 2013 hit song "The Way" together — and they dated from 2016 until 2018. In May 2018, Grande confirmed her split with Miller and she soon started dating SNL cast member Pete Davidson, to whom she was also engaged in the summer. In September 2018, Miller died at age 26. Grande and Davidson split in October 2018.

To say that it's been a difficult time for the singer would be putting it mildly. She's been through so much in a short amount of time and on a very public scale. Fortunately, Grande can express her emotions and work through her personal hardships by making music.

So with that said, here's a list of all the possible Mac Miller references on Grande's new album that capture how much the late rapper meant to her.