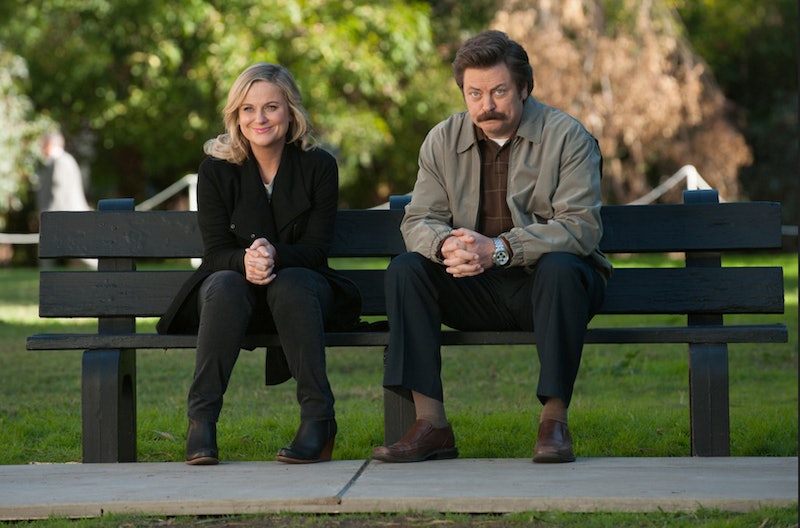 It's been just over two years since fans bid adieu to the quirky yet endearing employees of Parks and Recreation, but it still stings a little not having a weekly dose of Leslie, Ron, and the rest of the Pawnee, Indiana crew. Fortunately, the show's cast members still hang out in real life, and based on this Parks and Recreation reunion photo, their characters are still very much a part of them.

On Thursday, Rashida Jones, who played the lovable Ann Perkins, posted an Instagram snapshot of her, Amy Poehler (Leslie Knope), Aziz Ansari (Tom Haverford), and Aubrey Plaza (April Ludgate) hanging out. "#TBT to last month with this crew. #parks4life," she captioned the picture.

And they all just so happen to be sporting facial expressions that perfectly encapsulate their former roles. Jones and Poehler are grinning like cheerful BFFs; Ansari is overly excited, his mouth agape; and Plaza is flaunting one of those smug half-smiles that only April could pull off.

They've each since gone on to tackle new (but equally brilliant) endeavors: Jones leads Angie Tribeca; Plaza stars on Legion; Pratt is a bona fide movie star; Ansari has a mega-successful Netflix series, Master of None; and Poehler has a whole trove of projects in rotation.

But it's always good to know that their Parks and Rec characters are still living vicariously through them, and who knows, maybe one day Pawnee, Indiana will rise again.

More like this
Netflix Reveals First Look At Wednesday In The 'Addams Family' Spinoff Series
By Bustle Editors
24 Years Ago, 'Friends' Dropped Its Most Underrated Ross & Rachel Episode
By Grace Wehniainen
What Does Nancy Jo Sales Think Of 'The Real Bling Ring'?
By The Editors
Twitter Is Unravelling Over Wolverine’s Return For 'Deadpool 3'
By Darshita Goyal
Get Even More From Bustle — Sign Up For The Newsletter