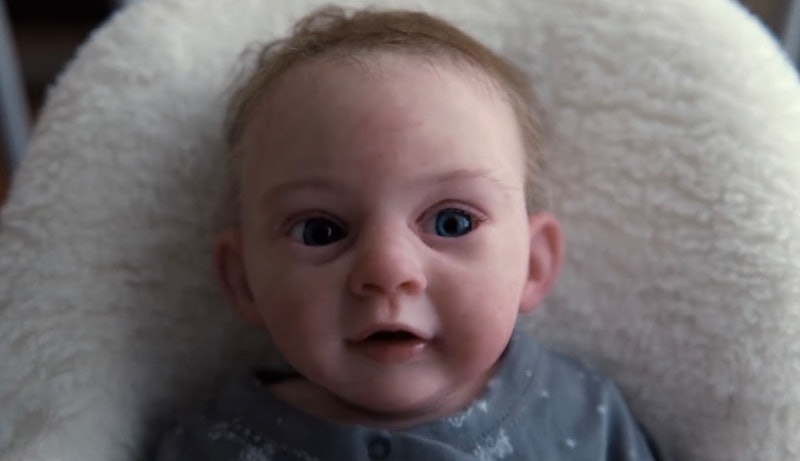 Following months of secrecy from producer M. Night Shyamalan, Apple TV+'s Servant trailer teases creepy new plot details. The Wednesday, Nov. 6 preview of the upcoming psychological thriller series reveals Philadelphia couple Sean and Dorothy Turner (Toby Kebbell and Lauren Ambrose) are grieving the loss of their 13-month-old son, Jericho. For Dorothy, whom Sean explains "took it hard," her grief therapy involved replacing her late child with a lifelike doll, which, he adds was "the only thing that brought her back."

The ten-episode series, which Apple TV+ will make available to stream on Thanksgiving, Nov. 28, will also deliver another twist in the form of the titular "servant," or more like "a nanny for a doll," Leanne (Game of Thrones’ Nell Tiger Free). For some as-yet-unknown reason, the caretaker seems to be even more committed (almost unsettlingly so) to the charade than the father himself. In its official description, Apple TV+ cited a "rift" in the mourning couple's marriage as opening opening "the door for a mysterious force to enter their home," so perhaps there's much more to Leanne than initially meets the eye.

Twice during the sneak peek clip, a voice is heard asking, "Do you know who you welcomed into your home?" The mystery of Leanne's identity will surely be central to the new series' suspense. Rounding out the Servant cast is Harry Potter's Rupert Grint as Dorothy’s brother Julian Pierce, who adds to the intrigue of what could potentially is transpiring in this Philadelphia house.

Prior to Nov. 6, the only publicly available Servant footage came in the form of two brief late Sept. teasers, one featuring the then-unknown "creepy-looking" baby watching TV. In the other, a cricket crawls out of a bathtub drain, and viewers hear a woman say, "My aunt used to say that when a cricket came into your home, something bad was coming." Shyamalan reportedly first privately unveiled the Servant trailer during an Oct. 3 New York Comic Con panel.

"Ok. I've been very quiet about what I have been working on with Apple TV+ but it has been one of the most incredible creative experiences," Shyamalan tweeted on Sept. 24, along with a Servant teaser. He added that he was "so excited" to tell fans all about the new show at Comic Con.

Servant marks Shyamalan's return to television following his Fox mystery series Wayward Pines, which ran for two seasons from 2015 to 2016. Shyamalan also recently directed 2019's Glass, which served as a crossover for characters from his Split and Unbreakable films. His is among the freshman roster of programming for Apple TV+, with the new subscription streaming service having launched on Nov. 1. Among other original Apple TV+ tites: Jennifer Aniston and Reese Witherspoon's The Morning Show and Dickinson, which stars Hailee Steinfeld and Wiz Khalifa.

If the newly released Servant trailer is any indication, the Apple TV+ series will surely have the attention of fans of a solid, creepy psychological twist. The image of fake baby Jericho is surely enough to stick in one's mind, at the very least.