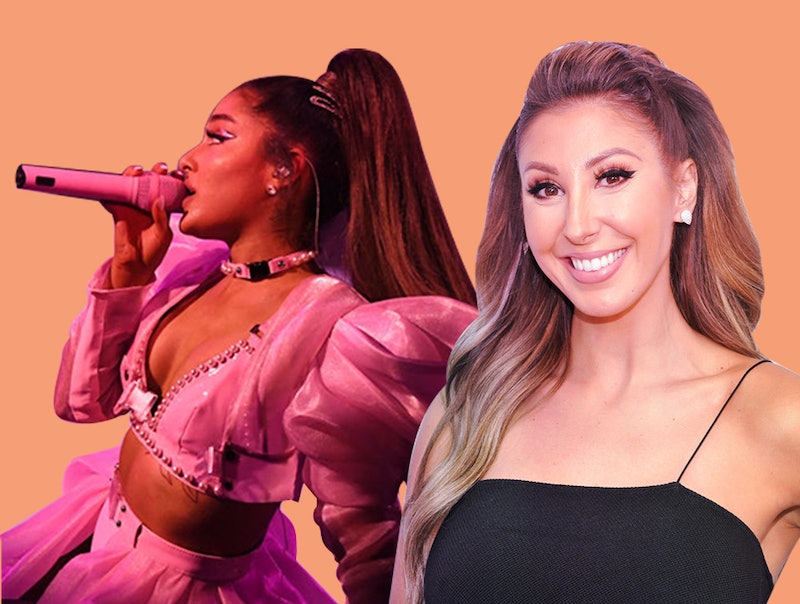 With an impressive eight MTV Video Music Awards nods, Ariana Grande's go-to director, Hannah Lux Davis, is the most-nominated director at this year's ceremony. For the Washington native, however, the true honor is that Grande is the artist behind a majority of them. "I definitely understand that I'm working with a real legend — and I mean that with a capital L," Davis tells Bustle in a phone interview, in between editing two brand-new music videos. "I honestly can't say enough good things about her... She works so hard."

The same could be said for Davis. In fact, due to her busy schedule, she hasn't even had time to celebrate her nominations or pick out a fancy red carpet dress— she'll be watching the Aug. 26 Newark, New Jersey award show from the comfort of her couch on the West Coast. ("If Ariana was going, I would 100% be there, but she's on tour in Europe," she explains, which is something Grande tweeted about to fans back in July.) Even so, Davis fully understands the significance of the recognition.

"It's just really exciting to be in the mix of some of the directors that I looked up to when I would watch TRL, you know?" she adds, and name-checks Dave Meyers, whose collaborations with Pink have made her fangirl over the years.

"I love, love, love working with female artists ... and being an extension of their voice through a visual form."

What's also not lost on Davis is that she's leading the pack as a woman, in what was once considered a male-dominated field. She believes, however, that it's a new day for female directors. "I think now more than ever people are starting to realize that a female voice is really being sought after and it's really exciting," adds Davis, who's worked with Ciara, Nicki Minaj, Miley Cyrus, Jessie J, and more. According to Davis, it's when she works with fellow women that "magic can happen."

"I love, love, love working with female artists and collaborating with them and being an extension of their voice through a visual form, and I just really thrive on that connection," she says. For example, Halsey's "Nightmare" vide spotlights "the multi-dimensional woman," who can be anything from "rough and edgy" to "glossy," according to Davis. "[The song] had a lot going on musically in terms of a style and tone, and it really allowed for a visual that could be montage-y."

Arguably, there's no artist she shares a stronger bond with than Grande — the two have been collaborating for about five years now. At this point, the duo even developed their own shorthand; they're truly in each other's heads. As Davis remembers: "There's been multiple times when we're both like, 'What do you think it is?' And we'll both say the same thing at the same time. We're really just getting in sync at the moment."

Plus they share plenty of common interests, particularly within pop culture. This, of course, was evident in "thank u, next," which referenced classic movies like Mean Girls, Legally Blonde, and Bring It On. For Grande's most recent "Boyfriend" video with Social House, they, again, paid homage to Mean Girls, as well as Dumb and Dumber. The latter came about, Davis says, when she and Ari realized they both love Jim Carrey.

Then there's the fact that Grande "really calls the shots" and puts her most authentic self on display in all that she does. That was particularly evident with the "7 rings" music video.

"Ariana was just really feeling that one," Davis recalls. "That was her vibe. Like the accessories and her hair, that sparked a whole era of her new look. She knows who she is and she has a very distinctive voice — not just an obviously amazing singing voice, but she just knows her message and conveys it so well."

Davis is clearly a pro at translating that message into a killer visual, as she's done with Grande time and time again. And come VMA night, she will have plenty to celebrate whether or not that includes a Moon Person — or several.