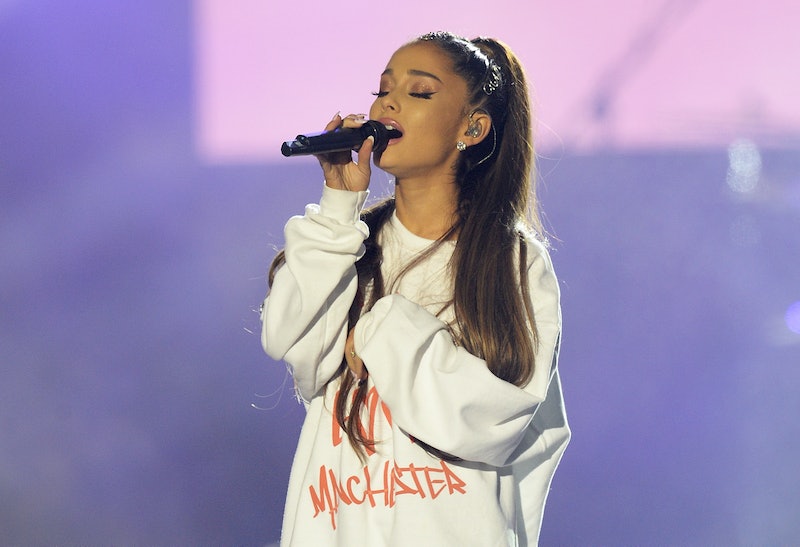 Ariana Grande's latest album, Sweetener, highlights how the singer is recovering after the terrorist attack at her Manchester concert in 2017. Although she doesn't have a song that explicitly addresses the tragedy, fans believe that Grande honored the Manchester bombing victims on Sweetener in a subtle way with "Get Well Soon."

The final song on the album, "Get Well Soon" features 40 seconds of silence at the end. Adding silence to a track is pretty common for recording artists, but people think that Grande's intention was to pay tribute to the victims of the terrorist bombing that occurred at her concert in Manchester, England. The moment of silence makes the song's runtime 5:22, which is also the date of the bombing — May 22 (or 5/22). And her wordless tribute, though unconfirmed by the singer, is a touching way to acknowledge how the pain caused by the bombing will never truly go away.

Grande previously explained how the Manchester bombing influenced her new music in a Time profile. "When I started to take care of myself more, then came balance, and freedom, and joy," Grande said of the aftermath. "It poured out into the music." That freedom and joy is heard throughout the 15-track album, which features a song about how happy she is with fiancé Pete Davidson. But, even with all the happiness, the Manchester bombing is not something that Grande will ever forget as the moment of silence at the end of "Get Well Soon" seems to show.

The actual song ends at 4:42 after one long tone and then is silent for 40 seconds. While Grande hasn't confirmed that this was for the Manchester bombing, that's how it is being interpreted because of the connection between 5:22 and May 22. The number 22 is further symbolic, as 22 people were killed in the attack.

Grande has been open about the emotional toll the attack took on her, but she has also been there to support the other people impacted. Two weeks after the bombing, Grande hosted the One Love Manchester benefit concert to raise money for the victims and families. Manchester named her an honorary citizen for returning to the city and helping after the horrific incident. And she has recognized the tragedy in other subtle ways through her new music, like when a bee appears at the end of her "No Tears Left To Cry" music video. The song was her first release after the attack and the bee is a symbol of Manchester.

A fan asked on Twitter what "Get Well Soon" was about before the song was released and Grande stated that it was about her anxiety. "isss ab my anxiety," Grande wrote. "i felt like i was floating for like 3 months last year & not in a nice way. like i outside my body? was v scary and i couldn’t breathe well. so it’s ab that. & lots of voices in my head singin. i hope it comforts ppl who hear it pls."

Yet, the moment of silence gives the final song another layer of meaning. And Grande managed to do this wordlessly since she has stated that she doesn't want to speak directly about the attack. "I don't want to give it that much power," Grande told Time. "Something so negative. It's the absolute worst of humanity. That's why I did my best to react the way I did. The last thing I would ever want is for my fans to see something like that happen and think it won." So it seems she added the silence to the end of Sweetener as a way to honor the victims without giving power to the horrific attack.