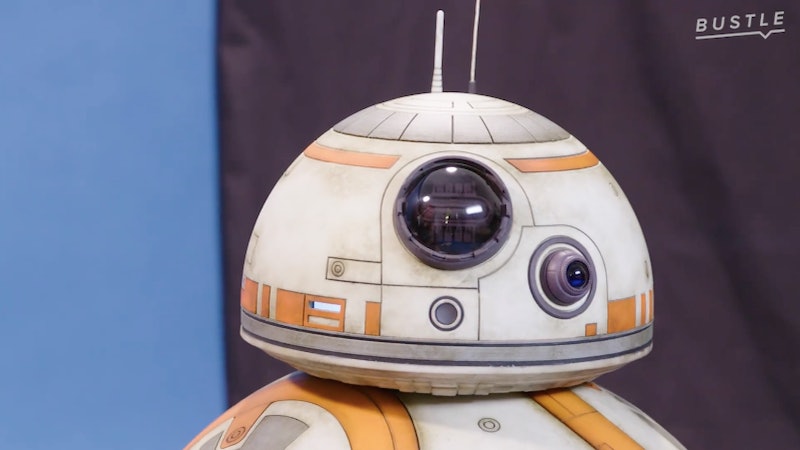 If you've watched The Last Jedi and can't get enough of BB-8, brace yourself. The adorable droid stopped by Bustle headquarters recently for an interview, and it's seriously the most precious thing you'll see all day. BB-8 answered The Last Jedi's most important questions — well, most of them anyway. Of course, there are just some secrets even BB-8 can't spill the beans about.

Bustle's Senior Entertainment Editor Kelsea Stahler conducted the very serious video interview with arguably the galaxy's cutest star. Question topics ranged from Kylo Ren's magical hair (nope, not that shirtless scene that everyone else can't stop talking about) to his true feelings about the evil, but equally adorable BB-9E stealing his spotlight. Oh, and he even gets asked about the identities of Rey's parents. However, he definitely keeps mum on that last topic, which is more than understandable.

Still, you'll want to watch the clip, if only to hear BB-8's R2-D2 impression. It's pretty much spot-on. And don't worry, there are no spoilers for The Last Jedi in the video. (But if you haven't seen the movie yet, what are you waiting for? It's truly commendable that you've managed to avoid spoilers up until this point anyway.)

As you probably guessed, you'll need some sort of droid-to-human translator to understand what he's actually saying in the video, but there's no denying that the Star Wars creature is endearing AF. And honestly, isn't that what matters most? Plus, trying to decipher his beeps is half the fun.

One thing's clear, BB-8 doesn't seem too thrilled about BB-9E's introduction in the latest film. However, it probably will bring the adorable droid some comfort knowing that fans still are Team BB-8. Just one look at Twitter and it's obvious he holds a special place in fans' hearts. Several people even deemed him the best part of the entire movie, which sure says a lot.

Of course, it's not just BB-8 who's winning people over. There's plenty of Twitter love for his buddy Poe Dameron and the newly introduced Porgs. But even though BB-8 first joined the franchise in 2015's The Force Awakens, that doesn't mean he's a character to scoff at or old news by any means.

And in case you're wondering, BB-8 is one very busy droid. In addition to stopping by Bustle's NYC office, the creature attended multiple The Last Jedi red carpets, because of course he did. BB-8 even came face-to-face with Prince William and Prince Harry at the film's London premiere. He even bowed out of respect, like the little gentleman that he is. (Slight spoiler: both princes had a cameo as stormtroopers in the latest film, but good luck trying to figure out which ones they are.)

And it wasn't just royalty that this Star Wars star came face-to-face with. According to Pitchfork, BB-8 met Radiohead's Thom Yorke at the Los Angeles premiere of the film. Naturally, Twitter was totally here for that interaction. This just goes to show everyone from princes to musicians are fans of the orange and white droid. Can you blame them?

Even Laura Dern, who plays Admiral Amilyn Holdo in the film, can't get enough of this little guy. She shared a video scratching BB-8's belly and bonding with him to her Twitter account. In between bursts of laughter, she gushes about how much she loves him in the brief clip. Again, a totally warranted reaction.

Clearly the fandom can't get enough of BB-8, so really, he has nothing to worry about when it comes to BB-9E potentially stealing his thunder. And regardless, as his recent Bustle interview proves, he can bust out a solid R2-D2 impression when need be, so he's basically set for life.