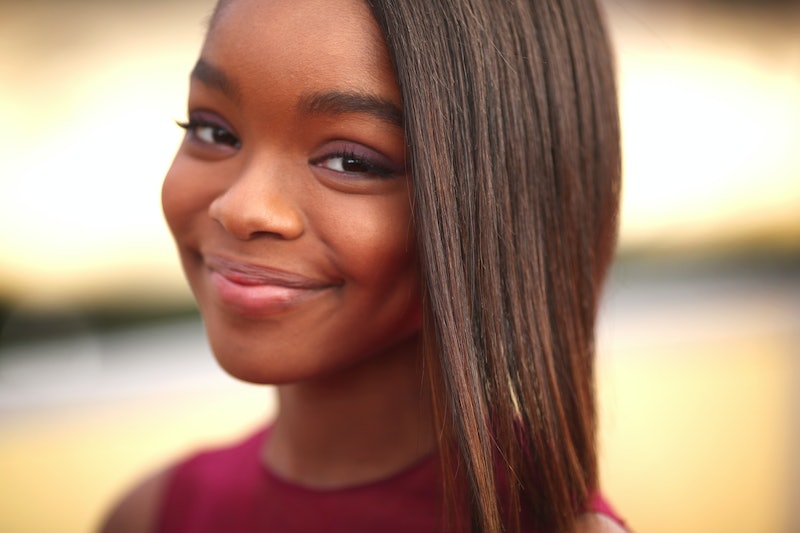 Marsai Martin not only brings a ton of laughter to black-ish fans on the ABC series, but the young star is also gearing up to bring that same comedic energy to big screens real soon. According to The Hollywood Reporter, Martin is executive-producing a new movie with the Girls Trip team, and the details will make you want to race to the theater.

The world currently knows Martin as the seemingly wise-beyond-her-years Diane Johnson, the fraternal twin of Jack Johnson, who has no filter and a knack for seeking the most perfect revenge on those who've wronged her in whichever way. Thanks to Martin, Diane is one of the most lovable characters on the series, and she has the comedic timing of an actor who's been in the business for decades.

It's being reported that the actor's new feature was actually her own brainchild, and — wait for it — she's only 13-years-old. Entitled Little, Martin's first feature will be about a woman getting a chance to escape the harsh reality that comes with adulting, and live life as her unbothered, adolescent self (played by Martin). So think Jennifer Garner's 13 Going on 30 in reverse, and seriously, it sounds amazing. According to THR, a first draft of Little was written by Girls Trip wordsmith Tracy Oliver, and the film will be directed by Drumline writer Tina Gordon, who also crafted the latest draft of the Universal Pictures' script.

Will Packer and James Lopez, aka the masterminds behind 2017's box-office hit Girls Trip, will produce alongside Martin, black-ish creator Kenya Barris, and Girls Trip star and executive producer Regina Hall. Character details (besides Martin starring as the younger version of the lead character) have yet to be released, but Hall having her hand in the film just may hint that the actor will be picking up a role too. It would definitely be a treat to have Hall and Martin on the screen, so fingers crossed.

This will be Martin's first feature film, and it goes without saying that it's one heck of an accomplishment. The young star executive-producing the project at this point in her career sends the clear message that "age ain't nothin' but a number." Stranger Things' Millie Bobby Brown is also grabbing the producing reigns of one of her upcoming works, making history in the process. Along with producing, the 13-year-old star is set to star in a film franchise based on Nancy Springer's Enola Holmes Mysteries novels. And the buck of young creatives telling their own stories totally shouldn't stop with Martin and Brown.

Little sounds like the perfect project for Martin, and it's only going to propel her into even more superstardom. Fans of Martin, her black-ish costars, and other celebrities totally agree, and they couldn't help but celebrate the actor's recent accomplishment on Twitter.

Martin, who also just picked up a 2018 NAACP Image Award for Outstanding Supporting Actress In A Comedy for her black-ish role, is representing hard for the young artists. And with her latest feature announcement, the Dallas native is setting the bar for what it means to be a junior talent in the industry. She's clearly taking her work seriously, and if being honest here, Martin is also raising the professionalism bar for a lot of adults too.

While the rest of us were battling middle-school growing pains at the tender age of 13, young stars like Martin and Brown are brokering major deals in Hollywood. And if that doesn't make them forces within the industry, what will?

Here's to hoping that more details surrounding Martin's new project drop soon, because Little is already looking like it's going to be another box-office winner.